Sunset is a game driven by it's strong narrative and deserves to be looked at by those who enjoy character interaction as well as game play.
by Angelina Bonilla

It is 1972 in Anchuria, South America and after a hostile takeover of the government, you are Angela Burns, an American tourist, find yourself trapped in the country with no way out. You are forced to get a job as a housekeeper for the wealthy man named Gabriel Ortega.

As the days roll on you find yourself becoming curious about your new boss and the urge to go through his belongings rises. You give into these urges only to find out a lot more than you expected. You realize your boss might be involved in some sort of rebellion. What are you supposed to do? Will you allow yourself to become a rebel like him, fall in love, or perhaps something else?

What will you do when you report to your job an hour before sunset?

Sunset is narrative based story game by the famous Tale of Tales. This particular group of developers have done well received games in the narrative game genre such as Graveyard, The Path, and other titles. This good reception helped them receive full funding for their Kickstarter and they met quite a few of their stretch goals as well.  Tale of Tales has always been known for their unique storytelling style, dark tones and well developed characters.

With their newest entry, Sunset, they’ve created a wartime-based narrative in a fictional South American city, focusing more on the people within it and the war serving as more of an overarching story. The “action” in the game is primarily focused on the apartment that your character, Angela, works in. From there, whatever choice the player makes ends up changing and shaping the story.

There are multiple ways you can go about involving Angela in the life of Gabriel Ortega, her boss and how you develop their relationship reflects on how the story may turn out. In the end it’s all up to the player and how they interact with the world around them, which is something most players like. Being able to influence the world around them by the smallest actions.

I recently interviewed Sunset’s team, Tale of Tales and had the opportunity to learn more about this game of epic wartime drama and intrigue. 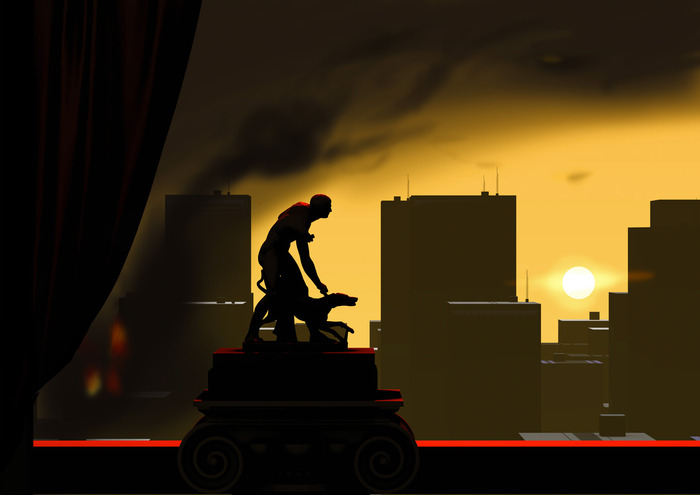 GS: What inspired you to start working on creating video games rather than other forms of media?

Tale Of Tales: We ended up in videogames rather gradually. We both have a background in traditional fine arts, worked in graphic design and switched to the web completely in the mid-nineties.

Our interest in non-linear interactive design grew as technology evolved. We made some pretty sophisticated web sites at the turn of the century. But then the web sort of imploded as a creative environment when it exploded as a social one. We were hooked on interactivity and procedurality and simply switched mediums rather than giving up or going back to more traditional forms (as many of our colleagues did).

Videogames seemed like an extension of all the things we had been doing with art and technology. With the added advantage that there was an audience hungry for new experiences. An audience looking for things to enjoy. 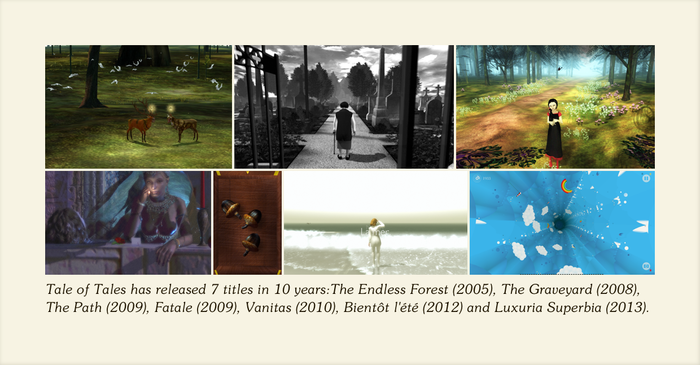 GS: How did Tale of Tales form and how many projects has the team worked on together?

Tale Of Tales: When we switched to videogames, we felt we needed a separate identity. In the beginning, which was before independent development became viable, we set up a company and became "managers". Working in that way didn't suit us at all. And things changed fast as we figured out how to make the games we wanted to make. We found ways to balance the creative work and the programming ourselves. And we find collaborators on each game who contribute all the things we are not able to do well or whom we feel will make the project stronger with their work.

We have released 7 titles so far as Tale of Tales but we've worked on quite a few more. Some were simply never finished, others were research and prototyping projects.

GS:  Is a strong narrative the most important part of video games for you?

Tale Of Tales: No. For us it's all about atmosphere and immersion. If a game allows us to spend some time in its world, we're happy.

GS:  What is Sunset about?

Tale Of Tales: We are creating an environment in which people are stimulated to think about conflict, violence, culture, romance, etc. That is, if we do our job well. But we have no single message, other than perhaps "Isn't it fun to think about these things?”

And, for us, it is definitely a way to think about contemporary issues of racism, sexism, social class, economic imperialism, cultural oppression, and so on. Fiction is wonderful. We can have event take place in the past to think about today. 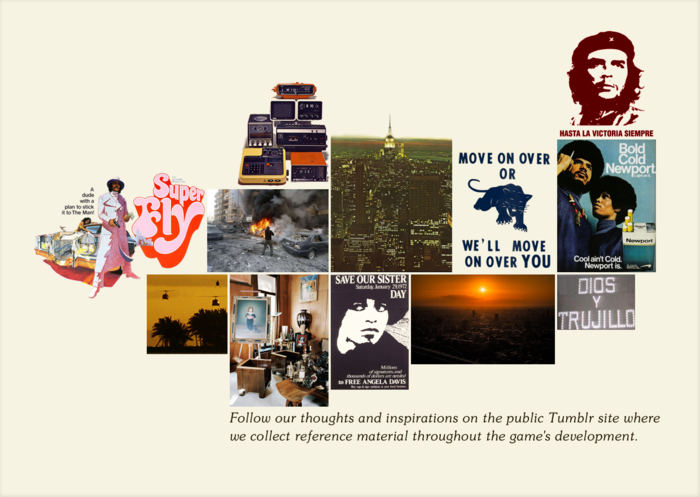 GS:  How did you come up with the idea for Sunset?

Tale Of Tales: In 2005 we had an idea that we prototyped, a love story about a couple living in an apartment where you played a fly on the wall, a voyeur almost. During daytime you would observe in a high-speed blur the things that went on in the apartment and at night while they slept you could roam freely and go through their things to uncover clues of what was going on with them.

We ended up putting that idea aside as we couldn't fully concentrate on it at that time. But the core idea is what eventually would become Sunset. The original idea didn't really have an avatar. You played some undefined ghost-like creature. But later we added a cleaning woman as the avatar, an immigrant even back then.

GS:  The main character seems quite different than most main stream video game characters we see now, where did the idea for her come from?

Tale Of Tales: That was very gradual. When designing Sunset, originally, the avatar, while being a housekeeper, was rather vague as a character. We had, fairly randomly, chosen 1972 as the year in which the game would take place. When we started reading about history, we discovered that that was the time of the Black Panther movement, and Black Power in general. And we were very inspired by Professor Angela Davis, the trial against whom at the time became a symbol for social oppression and racism in the USA.

We wanted our Angela to be from the United States too, so that many players could identify with her on some level, if only because they may think her look is a cliché… but still she challenges expectations of a videogame character. She is a woman with an unconventional world view placed in difficult circumstances. She is in a situation where she’s like a fish out of water, like the player. 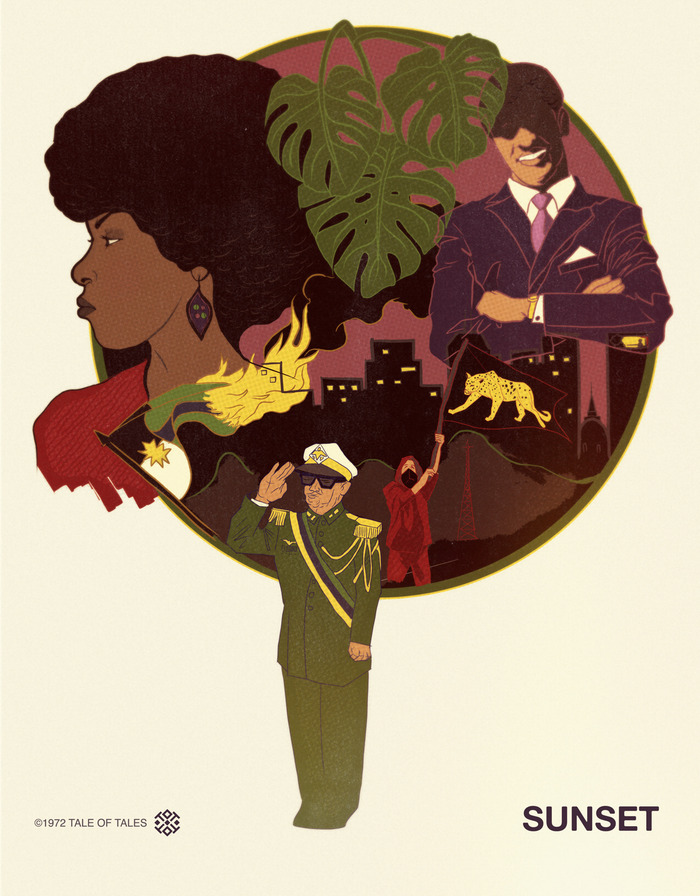 GS: The Kickstarter mentions that the game takes place in the 1970s which were a huge time of change. What moments in history did you draw inspiration from in order to create this games particular narrative?

Tale Of Tales: It's not so much specific events as a general spirit of that era that we are inspired by. There was the civil rights movement on the one hand, but there was also the sort of sophisticated gentleman's lifestyle, in the wake of the sexual revolution, a new sort of hedonism. The apartment in the game for instance is based on a design we found in an issue of Playboy magazine from that era.

For the South American aspect of the setting, we've been looking at a wider historical period. There's been coups and revolutions in that area for over a century. We're especially interested in the 1960s and 1970s when the US government backed many dictators in an effort to combat communism (which is eerily similar to their current effort against terrorism). 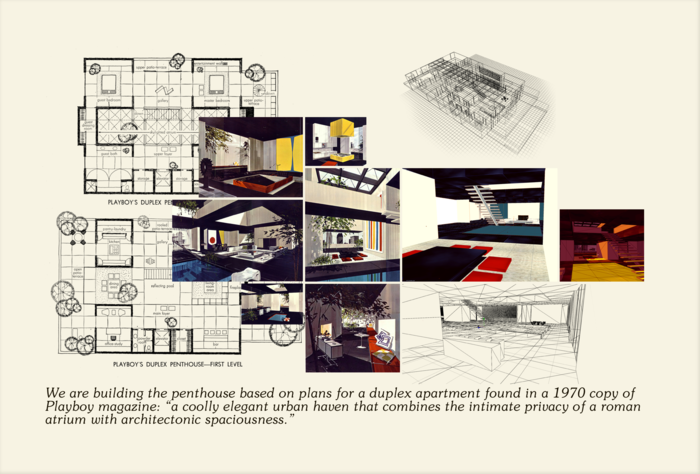 GS:  The game takes place in an apartment that holds many secrets, what sort of things can the players expect to find in Sunset?

Tale Of Tales: The penthouse of Gabriel Ortega is just an unfamiliar place at first, for you and for Angela Burnes, the character you play. You both enter the apartment without knowing much about it or the person who lives there. Together you discover things while snooping around.

As for the sorts of things in the apartment, next to the usual book, magazines and music albums, etc, the apartment is equipped with all sorts of 1970s technical gadgets that we hope to make interactive. And then there's Gabriel Ortega’s strange collection of exotic artifacts and works of art, all very curious items that contrast heavily with the cool modernism of the flat's design.

GS: The relationship between the main character and the unsuspecting bachelor appears to be a key part of the games narrative, how much does the player influence their relationship and the narrative at large?

Tale Of Tales: We're using a very simple mechanic. For several tasks or actions in the apartments there's two ways of performing them. Doing something one way will intensify your relationship, doing it another way will create some distance.

You never meet the owner of the apartment but he does leave notes for you, and you can do things in the apartment that he will notice, interpret and respond to. It's a very playful, minimal way of communicating with a stranger. And you decide whether you keep things neutral or friendly, or whether you go for romance.

The larger narrative cannot be changed. But you do decide to some extent how much you are involved in the events. And given the nature of these events, that makes a big difference.

GS:  Narrative games are a polarizing topic among many in the video game community.  In your own words, could you tell us what you think about narrative games as a whole and what this particular genre adds to the gaming as a form of interactive media?

Tale Of Tales: This depends what you mean by "narrative games". For us videogames are about immersion, a sense of presence, being somewhere else, seeing things through the eyes of another person, etc. Leaning too much toward heavily structured competitive gameplay often stands in the way of that. But so does leaning heavily toward conventional storytelling. Both add an alien element (linearity, causality) to a medium that doesn't necessarily need them to be enjoyable.

In Sunset, the story is there to help players move through the experience. While the themes addressed by the story are important to us, the core of the experience is simply spending time in that apartment, in that world, in the shoes of Angela Burnes, while a war breaks out outside. From there the story is all in your mind.

Thank you Tale of Tales for allowing me to interview you. To find out more information about Sunset check out their Kickstarter, the Tale of Tales Twitter, Facebook and Website.  Sunset should be coming to gamers everywhere March 2015 according to the Steam Store Page. Sunset is a game that looks like it’ll be a fascinating look at a wartime narrative from a smaller scale. For any that are skeptical about the narrative story based game genre, take a look at Sunset it might change your mind.