Another advantage for Playstation 4 buyers? Free to Play and SOE Head to PS4!

Sony's partnership with Free to Play publishers like Sony Online Entertainment is giving players another reason to step up and purchase the PlayStation 4.
by Chad "Chuina" Albritton

In the midst of indiscretion regarding Microsoft's choice for their always online requirement and their roadblock for sharing used games, Sony seems to have another advantage up their magician sleeves: Free to play.

During their E3 Press Conference, Sony announced that, for the first time, the PlayStation 4 would require a $41.99 (a year) PS Plus+ membership to access online games. The reasons for this could be numerous but probably revolve around the idea of cloud gaming. The ability to save games on PlayStation servers and constantly push updates to games and devices means a strong infrastructure, and if you are from the MMO world like myself, you know that costs. (Sony has clarified that PS Plus+ is to be decided by the publisher.)

The messenger of good news arrives with another possible advantage to PlayStation 4 buyers: Not only will one PS Plus+ membership grant you Plus on PS3, Vita, and your new console, but you will also receive two free games a month! Unlike Xbox, we aren't talking about near three year old games either, but brand new experiences like Drive Club and an ever-increasing access to the indie market on the PlayStation Network.

Just a week before E3, Sony Online Entertainment announced their free to play titles move to PlayStation 4 with DC Universe Online and PlanetSide 2. SOE has stated via their E3 live streams that both DCUO and PlanetSide 2 will not require any form of PS Plus+ to play.

Free-to-play games for the PlayStation 4 that won't require you to have a PlayStation Plus subscription are currently confirmed to include DC Universe Online, PlanetSide 2, Blacklight: Retribution and Warframe. (IGN)

Couple this announcement with the possibility of Sony Online Entertainment to have these games ready for launch and you may have one of the best MMOFPSs and best super-hero MMORPGs on the market, ready for you to download as you plug in your PlayStation for the first time. 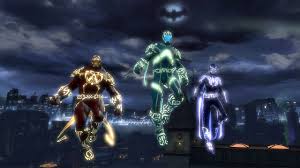 A Lack of Advertisement for F2P?

E3 is, no doubt, the one-stop annual shop (I should be a rapper, eh?) for the worldwide gaming stage. The choice for Sony to not include these free to play titles in their press conference may have been a mistake as Xbox was sure to bring up World of Tanks developer, WarGaming.net.

These free to play developers are bringing a lot of bonuses to the PlayStation 4, but it doesn't seem Sony Computer Entertainment is willing to meet them half way publicly quite yet, at least in the form of advertisement.  Perhaps they are awaiting the perfect time to advertise, or perhaps they are waiting for the appealing nature of free to play to grab the attention of the  market by itself.

It seems silly for Sony Online and Sony Computer Entertainment to share a parent company and not fully capitalize on this experience. Yes, they have worked together on projects like DCUO on the PS3 but the choice not to shove this partnership down the player's throat is quite interesting. Whether or not Sony chooses to do this on the PlayStation 4 or chooses to allow for their free to play titles to shine on their own, there is a strong benefit to releasing these games on the new console.

A HUGE Bonus for Sony Online Entertainment and other F2P Publishers

Sony Online Entertainment is no stranger to pushing the boundaries of online gaming. Starting with Everquest in 1999 and spiraling into one of the largest MMORPG portfolios, the company has always been persistent on change. Of course, not all change brings about benefits as can be seen with their projects such as Star Wars Galaxies and The Agency, but Sony Online Entertainment nonetheless continues their push for the next generation online gaming experience.

Their most recent first party release, PlanetSide 2, is centered around the strategic fun that is involved in a 2,000 player battle. Outfits (Clans) can reach up to 400 plus members with communication discipline and a rigidity that could only  be found in the real life military. The extraordinary situations created in this game and the open world allowing a player to do almost whatever they please, is a first in the world of first person shooters. PC Gamer recently announced it as one of their all time favorite PC shooters, and the awards on PlanetSide 2's shelf keep multiplying.

If Sony Online Entertainment is truly able to deliver this experience to console players on the PS4 and do it with the quality that console players expect, Sony Online Entertainment could see a huge boost in numbers for the game. The same stands for DCUO as it cleans up the interface and prepares for launch on the PlayStation 4. (DCUO on the PlayStation4 has been confirmed by SOE to be playable at SOE Live in Vegas come this August)

The move for SOE is not a lone move either with hit games such as Blacklight Retribution and Warframe heading to the PlayStation 4. These shooters have already captured the PC market and have numerous awards themselves.

Is this an Advantage for Sony? How could it not be!

PlayStation 4 seems to be the more consumer-centered approach this console generation and so far, it seems to be paying off for Sony.

With at least one hundred games promised to launch in the first year and open accessibility for game sharing and online capabilities, PlayStation 4 seems to be the ultimate destination for gamers. Growing this partnership is the mass push for Free to Play games with no PS Plus+ requirement. What benefits do you see for the move from PC to consoles for these games? Do you think Sony should be capitalizing on this experience more? Do you have any fears associated with these moves? Let me know in the comments below!

Communications and Media Studies graduate from Stetson University with a fascination towards virtual escapism.