Shiny Mewtwo is Being Given to Play! Pokemon Trainers

As a thank you for participants in a Play Pokémon! Event, Pokémon announced they would be distributing codes for a shiny Mewtwo.

To qualify for this legendary Pokémon, you must have earned at least one video game Play! Point during the 2016 season, are opted into the Play Pokemon program before July 10, 2016, and registered to receive emails from the Pokemon Trainer Club. 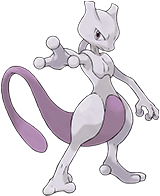 This is first time trainers can get a Mewtwo with the hidden ability Unnerve, which prevents opponents from eating a held berry. This Mewtwo is also holding the Mewtwonite Y Mega Stone which allows it to mega evolve during battle.

Play! Pokémon points are given to trainers who create a Pokémon Trainer Club account and participate in Pokémon leagues. Opportunities still remain for trainers to receive points, if they haven't already. The list of events can be found here.

Pokémon warned that the download codes for shiny Mewtwo will expire on August 21, so make sure to redeem this epic Pokémon before then. Mewtwo can only be redeemed in Pokemon Alpha Ruby, Omega Sapphire, X and Y.