MapleStory's newest class, Zero, is here and it is awesome.
by Synzer

MapleStory just released their second RED update, which includes a new class called Zero. Zero is very unique as it is actually two characters in one, a first for MapleStory. It also starts at level 100 and has its own storyline.

You play as a boy and a girl and because of that you cannot pick gender at character creation. Alpha is the boy and Beta is the girl. The time goddess Rhine created a "child" from her tears to fight against the Black Mage, but the child was split into two by his minions.

You start the game as Alpha and slowly uncover the truth and reunite with Beta. After this, you begin your long journey through the Mirror World.

The Mirror World is separate from the Maple World, but the areas are modeled after the Maple World. You cannot gain experience, items, or basically do anything in the Maple World until you complete the entire Zero story. The story consists of eight chapters and ends at level 180. This will probably take a while, but you can at least party with other Zero players in the process. 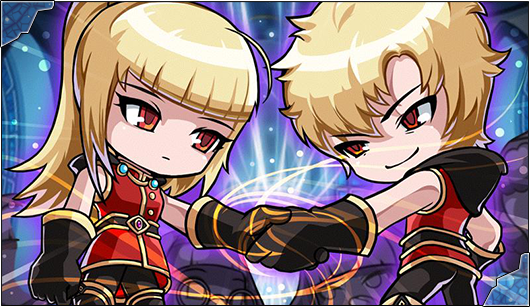 The story is interesting and it is very clear what you must do. I have only completed the first chapter, but the quests do not take a long time and they involve going into dungeons.

Dungeons have multiple stages to them and they are where you will get your quest items. You also get a huge bonus of experience for completing them, as well as time coins. Time coins are used to buy various items for Zero.

Each skill is set for either Alpha or Beta ans using a skill of the opposite character will automatically tag them in. For three seconds after the switch, both characters will attack at the same time. As soon as it is over you can switch back, or keep fighting as that character. This gives players a variety of attacks, as well as strategy of when to use a certain character.

There are plenty of other things in the update, which you can find by reading the patch notes on MapleStory's official website. I have not even started on any of the other content, but this looks like the best addition to MapleStory in a long time. If you are not already playing, now would be a good time to start!

If you have any questions or comments,  let me know in the section below!