NSA Could Be Spying On You While You Play Angry Birds

NSA and GCHQ exploit weaknesses in "leaky" apps, like Angry Birds, to collect information on terrorists.
by Amanda Wallace

The NSA has been under fire in the last six months for using large sweeps of cell phone data to "track terrorists." PRISM and other similar programs ignite people's anger on the subject of their privacy. However, newly published slides from the NSA (as well as its UK counterpart GCHQ) shows that they might be finding a new way to collect data: Angry Birds.

Angry Birds, in this case, is used as an example of what the industry calls "leaky" smartphone applications. In case you haven't read the large terms and conditions document that comes with signing up for an app, these apps are transmitting data over the internet, and it's not terribly secure.

The Guardian sums it up well:

The data pouring onto communication networks from the new generation of iPhone and Android apps, ranges from phone model and screen size to personal details such as age, gender and location. Some apps, the documents state, can share users' most sensitive information such as sexual orientation - one app recorded in the material even sends specific sexual preferences such as whether or not the user may be a swinger.

Documents leaked by Edward Snowden show attempts by the NSA and GCHQ to "piggyback" on this leaked consumer data. The NSA has evidently spent "more than $1 billion in its phone targeting efforts," and believes that cell phones are a common avenue for terrorist communication and planning.

How insecure is your data? Here's an example slide from the NSA presentation entitled "Golden Nugget:" 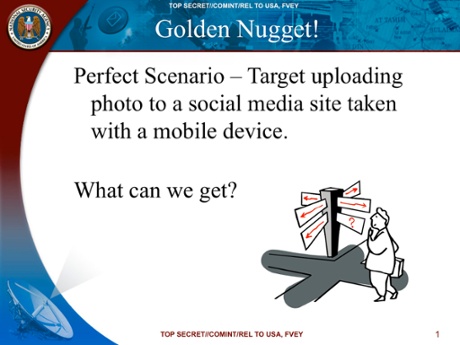 So what can the NSA get? Depending on the application, quite a bit. They can get access to the photo itself, as well as location, "buddy lists," and other metadata. Google Maps queries were also an avenue for data collection, leading to a 2008 document stating "anyone using Google Maps on a smartphone is working in support of a GCHQ system."

What does this have to do with Angry Birds? The GCHQ used the game, which was downloaded 1.7 billion times, as a case study to figure out how leaky such common applications could be.  In 2012, the game company is criticized for its widespread data collection, and the manner in which is transmitted the data to ad companies.

It effectively means that anyone using Google Maps on a smartphone is working in support of a GCHQ system.

Rovio, the maker of Angry Birds, has stated that it had no knowledge of intelligence gathering attempts being made by either the NSA or GCHQ.

Tracking cookies, incredibly common on most sites, are also apparently a focus for these security agencies to use against "valid foreign intelligence targets." This metadata can occasionally include information such as location and other private details.

President Obama spoke earlier this month about restricting the NSA's reach and its collection of metadata, but this latest information goes beyond the bounds of what was known about the NSA's data collection.