Supermassive Games dev hints at a Until Dawn sequel

With how good Until Dawn sold. There is talk about a sequel.
by KaosuDrake

Shortly after its release, PlayStation game Until Dawn became a massive hit with gamers everywhere. Now, hints from Supermassive Games say the adventure might continue in the Until Dawn Sequel. The game's ending suggested that the story of the mountain did not end with the game, even though all or most of the cast died, depending on the choices of the player.

The executive producer of Until Dawn Pete Samuels states in his interview that sales of the game have "surpassed expectations," with 17,472 copies sold in Japan alone. The game has also been featured on 24,200 YouTube channels. 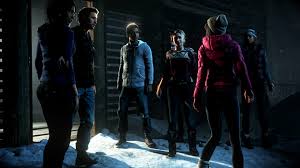 For being a PS4 exclusive this title, could have gone under the radar. Shuhei Yoshida, PS4 president, said that “considering how little marketing the company did for it,” he is “surprised by how well the game had sold”.

"We do talk internally about what Until Dawn 2 could be, as it clearly can’t be a sequel in the traditional sense" -Pete Samuels

Because of the game's ending, it could be hard for the story to continue in a normal horror movie fashion. The sequel will feature a whole new set of characters either in a whole new story, or traveling back up the mountain.

Some people may not like this change in cast. Don't worry - Supermassive Games will bring the creativity and suspense that everyone felt in the first Until Dawn game to the new game. It is hard to say since Until Dawn has only been released for three months, and it is still early to talk about a sequel.

I'm a aspiring video game journalist. I have a YouTube channel KaosuDrake. I will be posting videos every Monday and Thursday. I will probably be streaming if I have time. Anyways that out of the way I like strategy, RPG, and adventure games. If I am playing anything in my spare time if it's free it would be either modded Minecraft on a sever or Smite.