3 Franchises Which Could Be Revived With Virtual Reality

With VR being such a big deal right now, it could very easily revive some gaming franchises that we thought were dead.
by Clayton Reisbeck

When I think about games I want to play in Virtual Reality, I think about games that I feel are more than just a tech demo and are able to show me an experience that I won't be able to find anywhere else. As of right now, there are few titles that are able to give that to me. Granted we are early in the lives of VR headsets, but unless we get some titles that are able to showcase what VR is capable of and how it can tell stories better than what we have available today, VR is going to be tossed in the ditch.

Luckily, there are some franchises that haven't seen any life in a while that I think VR would be able to breathe life into. Here are three franchises I feel could be revived if they were brought into virtual reality. I miss the Metroid Prime series. Samus Aran is one of my favorite video game protagonists of all time. I can't tell you how many times in my youth I ran around a playground pretending to shoot down space pirates with an arm cannon.

It's been a long time since we've had a true Metroid Prime game and I don't think we're going to get one for a while, sadly. This is why I think it's a good fit for VR.

When Nintendo released the Metroid Prime Trilogy on the Wii and updated them for the motion controls, I found that it was the best way to play the games. So with this in mind, all we would need is to have the visuals be translated to a VR headset. Of the titles on this list, this is probably one of the easiest to do. The only issue I foresee is using the morph ball, so something would have to be changed for that. Aside from that, being able to shoot down those space pirates and scan different items in the game would just be a good time in VR.

What is it about horror and VR? While thinking up the franchises for this list, I had many horror titles written down but I had to narrow it down. And at the end of the day, one of my favorite horror games is still Dead Space.

Dead Space is the game that made me realize that horror games were fun. I'm someone who refuses to watch any horror movie and hates the sensation of being scared. But, put a controller in my hand and tell me to play a horror game, and -- though I may have to stop to let my heart stop racing -- I'll work my way through it.

Dead Space is a game that I think would fit perfectly in VR. The slow pace and exploration would translate very well. Being able to actually walk around the Ishimura would be a great experience and the scares would have a great impact. You'd have to change to a first person perspective but I think the whole experience would work well. All the menus actually popping up in your face and getting to see the monsters up close would make for a good deal of fun. All in all, I feel that Dead Space would find a nice home in VR. 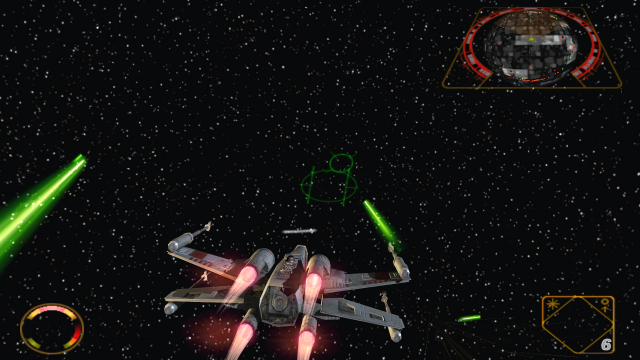 The Star Wars universe is hands down my favorite fictional universe of all time. Ever since I saw Episode IV when I was a kid, I wanted to be at the controls of an X-Wing. I wanted to be that ace pilot that was able to take down the moon-sized space station and save the day.

I wrote about my single experience in VR earlier this year, and in that piece I said the best experience I had was when I was dumped into the waiting room space -- the area HTC Vive puts you in to boot up new programs. In this space, you can have any wallpaper you want; it could be a 360 degree image of any room you want. The wallpaper that my friend had was the cockpit of the Millennium Falcon. When I saw myself standing in the cockpit of the fastest ship in the galaxy, I was overcome with joy. This is why I think that Star Wars: Rogue Squadron would make for an amazing VR game.

The game has everything I would want in a VR title. The mechanics, controls and gameplay would be a perfect fit. I mean it's one thing to be sitting in front of a screen making the trench run on the Death Star but it's another thing to be looking around the cockpit of an X-Wing while making that same run. You could look around and see the whole battle taking place around you while you focus on trying not to hit any of the obstructions that were in that trench. Just thinking about this gets me excited.

Now these three titles aren't the only games I could see being brought to VR with success. I'm sure that there are a plethora of other games that could be successfully done. I just feel that these titles deserve, and would seriously benefit from, a VR rebirth.

Do you agree with these choices? What games would you like to see brought to VR? Let me know in the comments!