9 of the Coolest Alternative Controller configurations

If you thought these games were hard with their original controllers, think again. Alternative gaming methods for the win.
by Joshua Harris

With the evolution of gaming came the ingenuity and innovation of controller technology. However, players have found new, exciting, and strange ways to use controllers that are far from their intended purposes. These nine alternative setups show the genius of the human mind.

YouTube user  WhyBeAre uploaded a video last month of his DJ Hero dual turntable setup to play Overwatch on the PC. It works surprisingly well; he has mapped the left wheel to move forward and backwards while the one on the right controls the aiming. The green button on the right table is assigned for the regular firing, the red button is attached to the alternate fire, and the blue button for the special fire.

Interestingly, the crossfader is perfect for switching up Lucio's alt fire from heal mode to speed mode (and vice versa), but for now the speed mode option will automatically move players forward in addition to this ability. And, finally, the euphoria button activates Lucio's ultimate with an added red glow on the controller itself signaling its use.

At about the 1:30 mark, WhyBeAre shows that the DJ Hero turntable can be used (against bots) and is actually functioning and playable Overwatch matches. Although, it would take extreme dedication to master this setup for PvP play.

Next is "Drum Souls" by YouTube user gbbearzly. As if Dark Souls was not hard enough, he has setup up the Rock Band drum set act as his controller. The red and yellow drums act as the left and right aiming, which would otherwise be used by the right analog stick. The blue pad is used to roll while the green pad is mapped for attacks. To complicate matters, gbbearzly can only move forward with the drum pedal, forcing him to make precise movements with the red and yellow pads either by furiously drumming on to rotate his character extremely fast, or by alternating both to navigate the terrain. The only "normal" buttons used are the menu and select buttons, which are present on the drum set as well. Given how difficult the game usually is, I do not think I could even beat this with a regular controller. Kudos, gbbearzly! 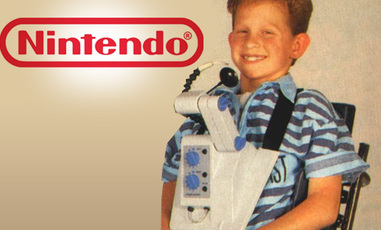 I thought it would be best to showcase one of the more serious alternative controllers because this one deserves the utmost recognition. The only available information on this national treasure seem to come from either the Houston Press or Kotaku.

Dubbed the 'Hands Free,' this controller was strapped to the player's chest and would allow quadriplegic players to use a long black stick with a pad at the end for their tongue, which would effectively act as the D-pad. The A and B buttons were controlled by a straw and would be controlled by a sipping- or blowing-breath action. The Hands Free was released in 1989 and was available to order through the customer service line. Kudos to Nintendo for getting ahead on accessibility for all players.

Prominent Twitch and YouTube gamer Rudeism took on World of Warcraft, reaching level 100 using only a pair of Dance Dance Revolution game mats. The button mapping is absolutely crazy, and I am thankful he uploaded the graphic showing exactly where he had to dance in order to survive. I cannot begin to wrap my head around the amount of patience and memory needed to survive an undertaking like this without losing my mind.

From the brilliant man who reached level 100 in Warcraft, comes the massive undertaking of an age classic, Portal, with a twist. Rudeism, known for his adeptness with alternative controller setup, also defeated GLaDOS using only a Guitar Hero guitar. Using Xpadder, his configuration was set up with the whammy bar in charge of forward and backward movement, the strum bar for looking left and right, and tilting the guitar for looking up and down.

The color coded keys controlled the portal gun itself: red and yellow buttons were mapped to strafe left/right, the blue button to the blue portal, the orange to the orange portal, the start/power/back buttons for picking up objects, and finally the left button on the D-pad for crouching. The game is playable and Rudeism managed to defeat GLaDOS within the time limit, so we know that Portal can be beaten using unconventional methods. Don't tell him about the cake though.

The enigma, known as the Twitch controller, has to be the most difficult setup in beating ANY game. Unlike physical controllers, such as the drum set, guitar, or turntable, the Twitch controller has no physical means by which a player can interact with the game. Keywords were mapped to certain text commands relayed from the Twitch chat to the computer hosting the game, which would in theory would be great if it was a single person playing the game.

But, thousands of people were in charge of coordinating certain commands in order to get through the game, proving to be one of the largest social experiments of all time. They managed to beat Pokemon Red in 16 days and 7 hours, which goes to show that people can cooperate long enough to beat all 8 gym leaders, the elite 4, and make it past the Pokemon champion.

If you have rhythm, you can take on the "For Glory" mode in Super Smash Brothers 4 like YouTuber PJiggles. Because the Wii U allows for the GameCube peripheral adapter, he was able to integrate the bongos from Donkey Konga, and essentially map each of the GameCube's original buttons to the bongos.

If you skip to the 45 second mark, PJiggles showcases the final product of his button mapping. Various actions allow him to use the character's grab ability. Tapping on the edges of the bongos will incur punching, shielding, and jumping. True to spirit, PJiggles takes on "For Glory" mode as Donkey Kong. The downside, however, comes into play in the actual fighting. The character can only face one direction, cannot move, and incurs idle messages during almost every match. I commend PJiggles for having the patience to map the controller and take the bongos out in the Smash ecosystem.

8. Too Epona Too Furious

After picking up the N64 V3 Racing Wheel at a thrift shop, YouTube Gamerdudemat decided that The Legend of Zelda: Ocarina of Time deserved to be played through with the wheel (3:04 is when he starts playing it). Walking around proves to be difficult, but it appears that riding Epona works perfectly with the controller. Stepping on the gas pedal will use her carrots, and the wheel can be used to aim the bow while on horseback as well. Interestingly, it also works perfectly for the fishing mini-game in Lake Hylia.

Another Twitch streamer and YouTuber, PeekingBoo, took on the Dance Dance Revolution controller challenge as well. But, this time, he went all out on playing Undertale on the actual, full-sized machine. The arrows on the left control the direction of the player in both the battle sequences and overworld.

However, the arrows on the right control the actions. The left arrow is used for canceling, the right for the menu, and the bottom for confirm. Given that Undertale is a bullet hell game, PeekingBoo demonstrates just how difficult it is to dodge in the battle sequences. Showing that to survive, absolute coordination is the key to mastering this Dance Dance Revolution and Undertale hybrid.

People enjoy a good challenge, and, by introducing a new method of gameplay, they are able to make a name for themselves in gaming history. One way to do that is through alternative controlling systems, such as the DJ Hero turntable or Dance Dance Revolution dance pads. Seeking other modes of gameplay is not just an ode to developers, it is an exercise in creativity, and it shows the lengths that gamers will go to just to show how dedicated they are to their livelihood. I think we owe these people a round of applause for sticking to their guns and showing us that alternative forms of gameplay are viable and commendable.