Is Now the Time to Be Getting Hyped for Red Dead Redemption 2?

After so many anticipated games coming out in broken states recently, now may not be the time to get hyped for Red Dead Redemption 2.
by Clayton Reisbeck

As we all have heard by now, Red Dead Redemption 2 has been announced by Rockstar Games. I classify Red Dead Redemption as one of the absolute best games to come out on the Xbox 360/PS3, and the best game that Rockstar has put out to date. I've spent countless hours in that game and in the Undead Nightmare DLC that they brought out for it. Knowing this, one would think that I would be ecstatic for this new game, right. Sadly, I can't say that I am.

Now, I would be lying if I was saying that I have no excitement for a new Red Dead game. There is a small bit of excitement I have, but in the recent months, there have been plenty of places to be burned after being hyped. Let's look at a few of the games that have come out recently that were highly anticipated but came out in states that no one wanted them to be in. I think it's safe to say that Batman: Arkham Knight was one of the most anticipated games to come out last year. With Rocksteady returning to the helm after taking a break from the series, there was plenty to be excited for. But, after bugs that seemed to be rampant through the game, a PC port that is still broken with no official intent to be fixed, and a game that, when it did work, as a whole was just okay (in my opinion), Batman: Arkham Knight felt like it was to be the poster child for reasons to not buy into the hype machine of games marketing.

As someone who is a giant Batman fan, I felt extremely burned by this game. I had played Arkham Asylum and Arkham City numerous times and absolutely adored them. Arkham City is hands down my favorite Batman game ever made. When Arkham Knight came around, I was so hyped. I couldn't wait to see how Rocksteady was going to end an amazing series that I had no problem supporting. I even had a copy of the game that didn't have a serious bug problem and I still felt let down by that game (the Batmobile was the worst thing to happen to that game). I still have not finished the story of the game and have no desire to do so. My copy of the game now lives in the floorboard of my car because when I went to trade it in at my local game shop, I was told that they had so many copies already that they couldn't accept any more. 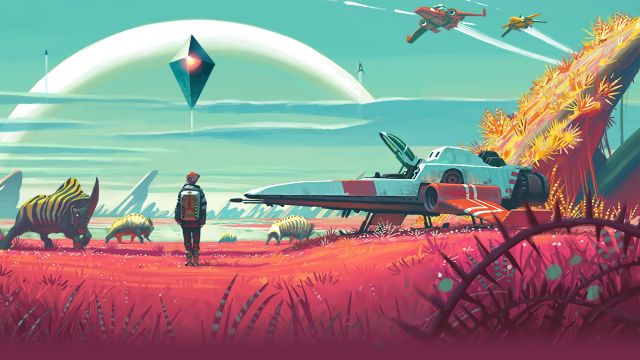 By now, everyone and their mother knows about the issues with No Man's Sky (heck, I've even written about it), but if we're talking about games that exemplify the problems with overhyping a game, it would be foolish not to mention it.

No Man's Sky is easily the most hyped game I have seen in my life. The hype around it made news on numerous occasions (remember the death threats?). If there was ever a game to point to about reserving your excitement, No Man's Sky is the perfect example.

The promises made about that game were huge and honestly unattainable especially for an indie studio who had only made Joe Danger, but the marketing around that game, the interviews with Sean Murray leading up to the game and the evangelists that came from the gaming community built that game up to basically be the second coming of Christ. When the game came out though, we all learned what mistakes the community had made by putting all their eggs in one basket.

Oh Mighty No. 9, where do I start with you? Mighty No. 9 was a game that got funded through Kickstarter after original creator for Mega Man proposed a spiritual successor to the Mega Man series. Promising a game that would feel like the Mega Man games of old, people flocked to throw their money at the Kickstarter. The game was funded in only 2 days. Originally slated for release in April of 2015, the game was delayed on numerous occasions and finally released in June of 2016. The game people received, however, was not what they were expecting. The game had many bugs and other technical issues that seemed to clog the gameplay making for a pretty mediocre experience.

This game is interesting to talk about here, because recently we've seen a fair few spiritual successors to games that are classics. Yooka-Laylee and Bloodstained: Ritual of the Night are two other games that have been funded on Kickstarter that are pretty hyped at the moment. The difference between those games and Mighty No. 9, is that Yooka-Laylee and Bloodstained: Ritual of the Night seem like they are being handled in a way that will live up to the expectations they have set for themselves. Mighty No. 9 falls short because it seems to have been clearly mismanaged. On top of that, people rightly expected a working game and didn't get that. The game is littered with many different issues, from level design to graphical issues. This game shows to not only to reserve your hype, but to also be wary when putting your money behind a game that is being crowd funded.

These are only 3 games out of a growing list that have not lived up to their expectations. Spore, Aliens: Colonial Marines, Fable III, Duke Nukem Forever are other games could easily be talked about here. As gamers, we have to be vigilant about what we spend our hard earned cash on. We can't continue to forget about games that didn't live up to the huge expectations that we give them. If we continue to forget how we've been burned, this industry won't learn from its mistakes and continue to take advantage of us.

While I'm not saying, "you shouldn't trust Rockstar." Of the big game developers today, Rockstar can easily be one of the most trusted. Their games are almost always hits, and usually release without a lot of massive issues (GTA IV and San Andreas PC versions excluded). I'm just saying that as we have over a year until Red Dead Redemption 2 is supposed to be released. I think it's safer to reserve my excitement, for now.