The Delta Episode added a depth of lore to the franchise that was never expected to appear in Pokemon, let alone Pokemon Omega Ruby and Alpha Sapphire.
by Autumn Fish

Pokémon Omega Ruby and Alpha Sapphire have been out for two months now, and anyone who has beaten not only the Elite Four but the Delta Episode as well will agree when I say it is one wild ride. The Delta Episode took the Pokemon franchise above and beyond the expected twists that this kid-friendly series is known for.

We are no longer questioning the moral of capturing Pokemon, but instead, we question the existence of parallel worlds that co-exist in harmony of one another. Now, if you haven't played the Delta Episode, you're probably wondering what I'm talking about; just be warned, there are spoilers as far as the eye can see.

While Nintendo may not be publishing Pokemon directly, they seem to have a lot of sway in the decisions GameFreak sometimes makes. Before recently, the only way to truly piece together the Pokemon timeline was to do a little digging yourself. All of the proof you needed was in the games, so the directors never had to come out with an official statement on the timeline--at least not until Pokemon X and Y.

Scenario writer Toshinobu Matsumiya, who has worked on the series since Pokémon Gold and Silver, officially revealed the timeline for the Pokemon franchise, reading:

... Well, this is rather curious. How can the two games take place at the same time, but be missing a similarity that's so basic and integral to the culture that it completely changes the way you think about Pokémon?

When it comes to timelines, there is no better game franchise to discuss than Zelda. Before The Legend of Zelda: Skyward Sword, there was no Official Zelda Timeline, but there were plenty of timeline theories floating around the internet. It was easy to connect certain games together, as they had obvious ties with one another--be it between items, mounts, or an actual legend about the previous game. The most popular theory at this time was dubbed the Split Timeline theory.

The Split Timeline theory effectively took the ending of Ocarina of Time and split it into an Adult Timeline and a Child Timeline. The connections were obvious, the beginning of The Wind Waker and Majora's Mask easily serve to solidify this theory. However, whenever somebody would send an inquiry to Nintendo about the official Zelda Timeline, they would reply claiming that there was none and that each Zelda title is just another iteration of beloved characters.

This was a hard blow to fans, and just another reason newcomers should avoid the series altogether because "each game is pretty much the same thing repeated over and over".

It wasn't until 2011 that Nintendo acknowledged the direction the series was headed and decided to release the Official Zelda Timeline--and instantly the internet exploded. Nobody could believe it. The Zelda Timeline had officially been revealed, and that is what it turns out to be? It is split three times.

Back in the day, I wrote up an article explaining exactly how it was possible for the timeline to split into three trees instead of just two, but never actually managed to get it approved by my editors as I "had no proof". Well, how else am I supposed to rationalize such an irrational Zelda timeline when Nintendo simply drops it with no real explanation?

Delta Episode and the Pokemon Timeline

The Delta Episode at the end of Pokemon Omega Ruby and Alpha Sapphire was something of a jaw-dropper for some people, and simply a mind-boggler for others.

Matt Pat did a great job of summing it up in one of his latest Game Theory episodes: The Pokemon Multiverse Explains Everything.

In case you would rather read my work than watch one of Matt Pat's videos--you should watch it anyway--then allow me to explain.

Pokemon Omega Ruby and Alpha Sapphire are essentially the same but have slightly altered storylines and different Pokemon available for capture. While it's easily accepted that Pokemon games are canon in the franchise, what are we to make of two games trying to steal the same spotlight? Obviously, these two games cannot possibly occur at the same time and in the same place, otherwise there would be references to the opposite version of each game scattered everywhere, when in truth, there's very little evidence to suggest this. While Pokemon Omega Ruby and Alpha Sapphire did support a lot of what-if statements that directly translated to the opposite version, this was mostly for people playing the games to gain a better grasp of what GameFreak was trying to explain to us.

Pokemon Omega Ruby and Alpha Sapphire are set in different dimensions--that's right, different planes of existence. Schrödinger's cat comes to mind. Instead of imagining the cat is in a super-state and is both alive and dead at the same time, we interpret that the cat is indeed both alive and dead--simply in different dimensions. This is known as the Many Worlds Interpretation. So let's say, upon opening the box, you find the cat dead; in another world, you are opening the same box and the cat is very much alive (and scarring your face). I know this looks complex, but bear with me. 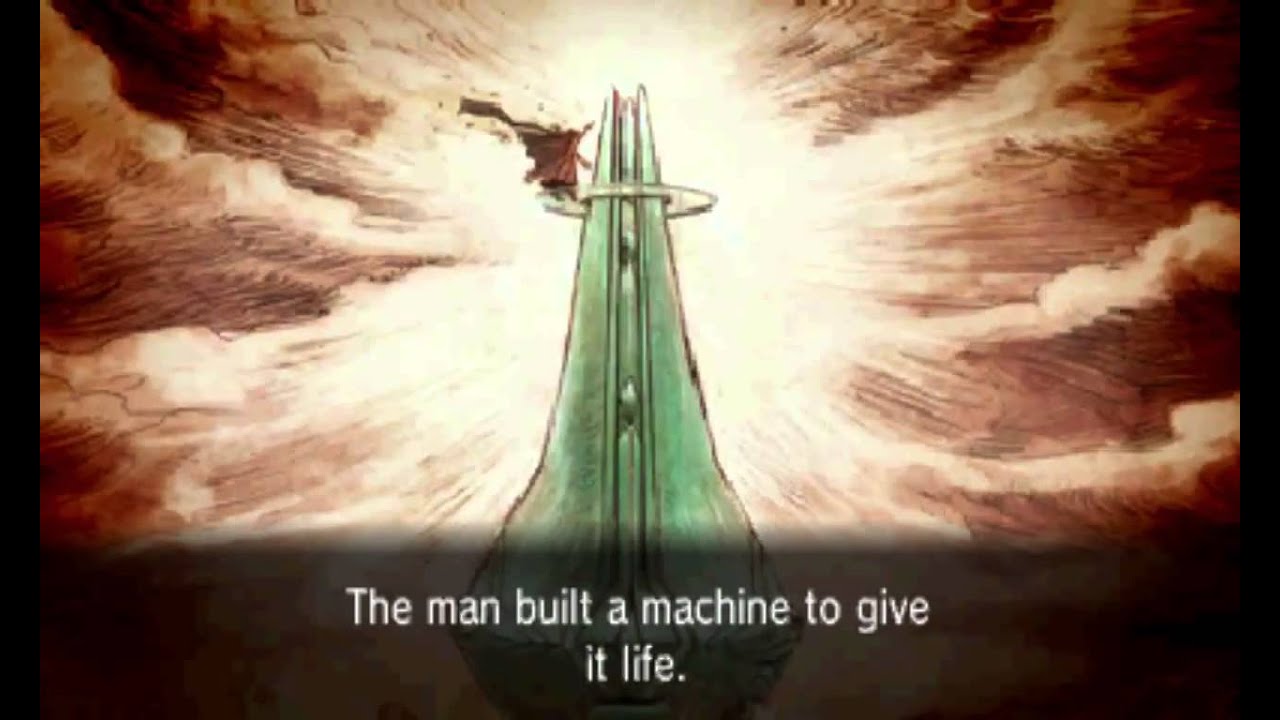 3000 years prior to the events of Pokémon X and Y, there was a trainer named AZ living in the Kalos region with his beloved Pokemon, Floette. To their dismay, a war broke out and Floette was called upon to fight, where they eventually died. Heart-broken, AZ went mad trying to build a machine that would bring Floette back to life... and it worked--but by the time AZ had finally finished the machine, he was so deranged about ending the war that he set the device to power itself on the lives of other Pokémon. Millions of Pokemon were killed--not fainted--to bring back Floette, and the aftermath of the trauma the weapon caused built the rock structures surrounding Geosenge.

Imagine for a moment that this war represents Schrödinger's cat. In Pokemon X and Y, the death weapon was fired off and brought untold destruction to the world of Pokemon. With it, the mystical energies of Mega Evolution are scattered about the world, alowing Pokemon to grow past their bounds of evolution to become stronger than ever before. However, in a world where the death laser was never fired, Mega Evolution would never appear and would be completely unknown to the citizens of the Pokemon world.

This sound way too complicated for a kid-friendly game, doesn't it?

Fast forward to the Delta Episode: in case you're unaware, the Delta Episode is essentially a doomsday plot where you are tasked with saving the Hoenn region from a meteor about the size of the one that killed the Dinosaurs. To do this, all those nifty scientists are planning to open a hole to another dimension through a device called a Link Cable.

Wait... that sounds familiar. Back in the prehistoric ages that pre-date handheld Wi-Fi connections, anyone who wanted to trade Pokemon with their friends had to do so with a device called a Link Cable. After breaking into the space center, Zinnia decides to point out the flaws in these scientist's epic plan. The Link Cable would open a portal to another dimension and the meteor would never be seen again in their reality, true. But what the scientists didn't account for is what can be found on the other side of that portal; which Zinnia quickly pointed out was likely another Hoenn region just like theirs. A Hoenn region "where maybe the evolution of Pokemon took a slightly different path, a world where Mega Evolution is unknown. A world where that war 3000 years ago... never happened. A world where the ultimate weapon was never even built."

A Hoenn region that Pokemon fans experienced 12 years ago.

Putting it All Together!

Pokemon X, Y, Omega Ruby and Alpha Sapphire are not on the same timeline as the previous generations at all. These stories take place in their own dimension, completely seperate from everything prior to Generation 6.

Pokemon X, Y, Omega Ruby, and Alpha Sapphire do not share a timeline with previous Generations.

To break it down further, each individual game represents their own personal dimension. Pokemon X's characters made slightly different choices than Pokemon Y's did. It's even more noticable in Pokemon Omega Ruby and Alpha Sapphire, with Team Magma and Team Aqua's plite. Let's jump back to the Link Cable: the device that they were going to use to shoot the meteor into another dimension--also known as the device used to hook Game Boys together. Even if you had the same copy of a game as your friend, you could still trade Pokemon between the two save files. That means each individual copy of any Pokemon game represents its own unique universe within in the Pokemon Multiverse.

This means that Pokemon fans have been trading Pokemon by opening rifts in time and space ever since Pokemon Red and Blue.

That's not all, though. A scientist goes on to mention that they use the technology quite casually in objects that people use everyday, mentioning the teleportation pannels found throughout the franchise. If you want to hear about anything more this might effect, make sure you check out Matt Pat's video above.

So there you have it. Your version of Pokemon Alpha Sapphire is really your own, personal Pokemon universe to enjoy. Please, go give your brain the much needed break it needs if you managed to read this entire article--I know I had to.