Explore strange planets and find your way to freedom in this charming point-and-click adventure.
by Janette Ceballos

The ever-spreading expanse of space sets the stage for this sci-fi adventure inspired by old-school point-and-click games. Red Dwarf Games puts a twist on the style by introducing an open world mechanic where you can fly through space from planet to planet at your own leisure.

Professor Gagayev, a monkey genius, and his canine assistant Perseus are astronauts. While traveling through an uncharted region of space, a strange anomaly causes their ship to crash on a strange planet. The two must work together to build a new ship, solve problems, and find a way to break the barrier trapping them in the zone.

It’s a quiet game. That’s the first thing you’ll notice once you are able to play. There are a few sound effects, especially when puzzles are solved or items are being interacted with, but for a majority of the game you will be listening to the soundtrack more than anything else.

Ambient music and a hollow, low tonal drone do a wonderful job of creating an atmosphere as strange and unsettling as the worlds you visit. It all works together to set a mood that lets you know you are in a desolate prison. People are trapped here, and it feels that way.

It’s gorgeous. The game has a charming 2D art style of hand-painted environments that remind me of an illustrated children’s book that give it a look of its own. Cute and fluid animations appear when puzzles are solved or when you are idle, especially for Perseus. 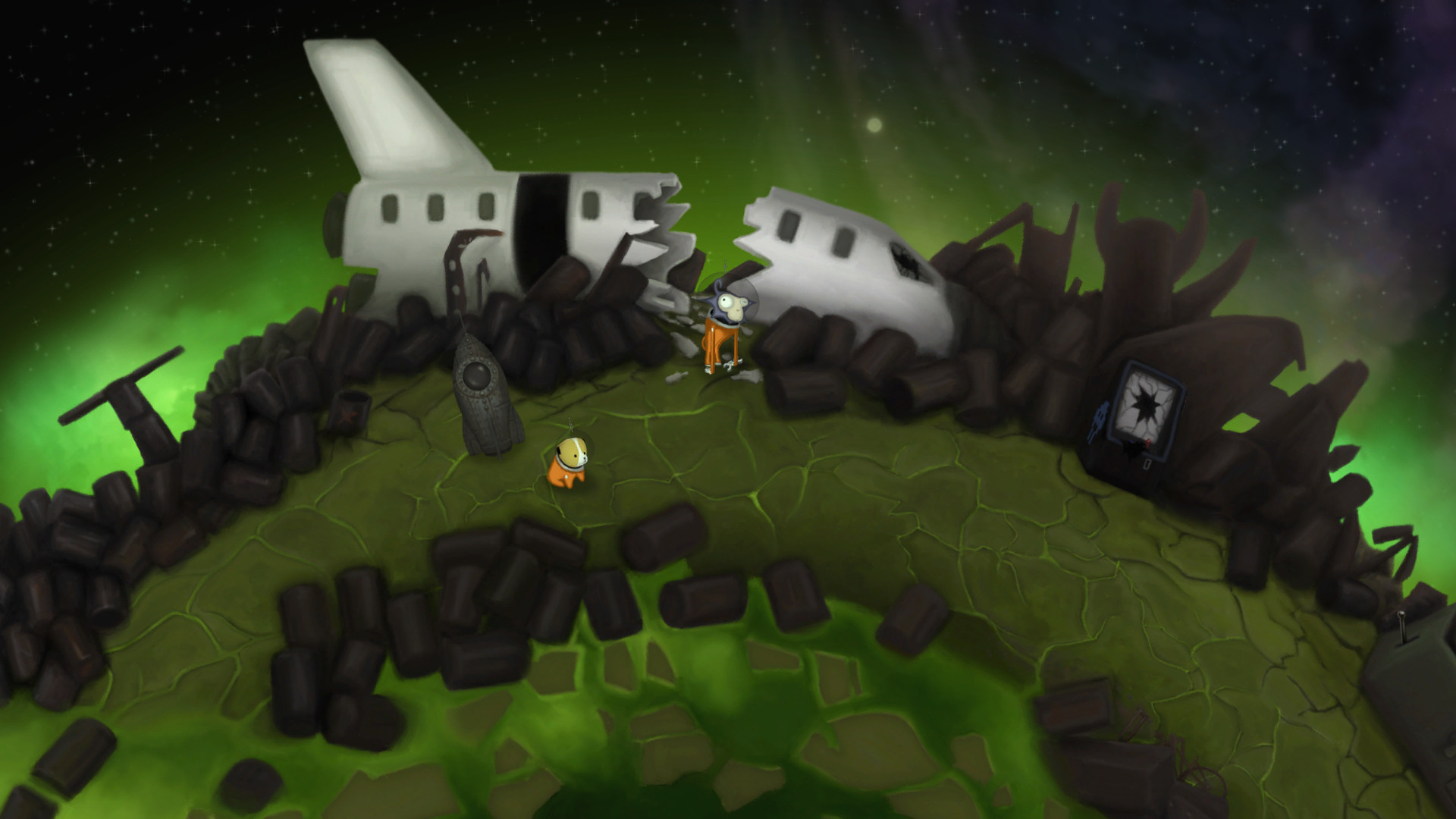 Stars and distant galaxies slowly revolve in the background. One thing to notice is that it’s eerie to see whole abandoned spaceships floating in the sky while you explore the planets on foot. In some, entire hulls have been ripped out. It makes you wonder what happened before you came?

As far as point-and-clicks go, this one is pretty standard. You play as both characters, searching through the seven areas to click around and collect items or interact with other strange creatures. Doing so unlocks certain events that will lead to freedom.

Each character offers different skills. Gagayev can use items you collect while Perseus has a loud bark. The little dog also serves as a translator and can give you hints for items. You can switch between the two very quickly and even get them to not follow each other, mechanics that are necessary for some puzzles. You can also abandon one of them on a planet while you take off in the spaceship.

That being said, there’s no death in the game and no mistakes to be made, just things that don’t work. Some of the puzzles are clever and require a bit of thought. You’ll have to think as odd as this game is to solve some of them. But fair warning: a few of the puzzles are time-based, so you need to be quick or patient depending on the situation. There’s a really neat, if not a bit frustrating, time puzzle later in the game that incorporates the world into the solution.

The Little Things That Make It Shine

For starters, the allusions to space are sweet. It’s cute that a monkey and dog are astronauts, a nod to the first animals in space. It’s also funny that mice get stranded on a moon-like planet. You know, because moons are made of cheese.

One thing I love about the game is the fact that there are no long-winded stories or explanations to bog it down. A lot of the stranded characters don’t speak much, but you just know they have histories you will never know. There’s an old man drinking beer. When you give him a trophy, he tosses you the bottle and holds tightly to the little statue. Something happened, but you will never know what. There’s a secret base. Why was it there? Why is it so abandoned now? You will never know, but it all adds to the eerie stillness of this bubble-trap space. 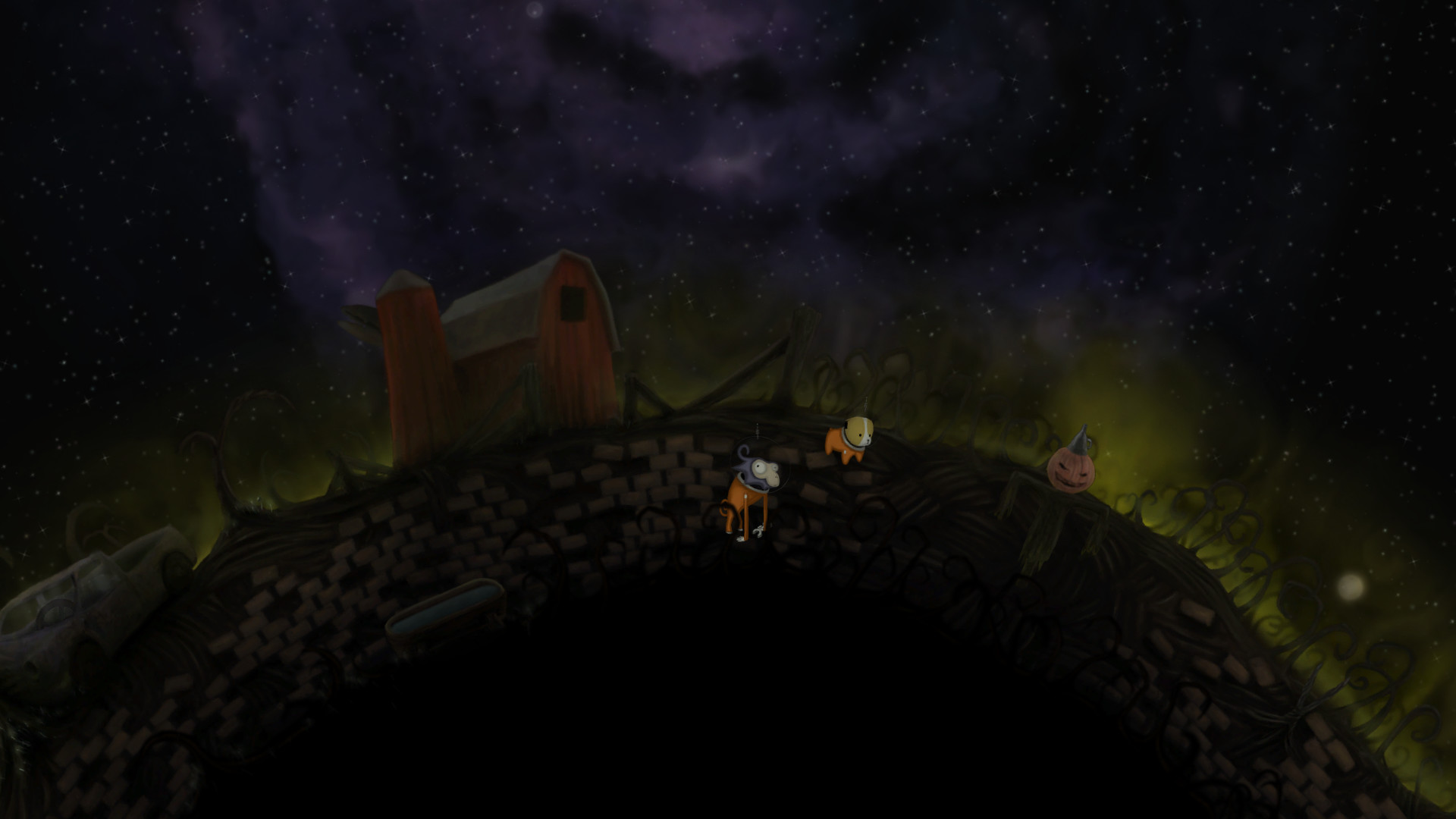 While what it offers is great, I would have loved to see more content within the main game to justify the $15 price tag. It’s a little too short at almost 3-4 hours, so it would have benefited from extra planets and puzzles. Not much is needed, but it would be nice.

Movement is incredibly slow, making it tedious to walk from one side of the planet to the other. The rocket flight is fluid and seems like a natural part of the game rather than a tacked-on addition meant to get you between locations, but it takes so long to get from planet to planet! With the amount of backtracking you need to do in the game, you can see how this can be a problem.

Considering this was the second game from a development team of two people, it is surprisingly well-made! While it doesn’t revolutionize the point-and-click genre, it’s a wonderful callback to the style and offers an overall enjoyable experience. If you love sci-fi, the theme of isolation, and weird animal astronauts, you’ll have a good time with Tales of Cosmos. It is currently available on Steam for $15.

Code provided by developers for review.

Our Rating
8
Explore strange planets and find your way to freedom in this charming point-and-click adventure.
Reviewed On: Steam
What Our Ratings Mean