These are some of the best changes that have been made to the Hoenn region in Pokemon Omega Ruby and Alpha Sapphire!
by Autumn Fish

Pokémon Omega Ruby and Alpha Sapphire were finally released in Europe and PAL regions on Friday. With the entire world having access to these games, fans of the original Ruby and Sapphire and newcomers to Hoenn both get to capture and train Pokémon in the second main-region to receive the 6th Generation's 3D treatment.

Fans of the original game have said that it feels a lot like the Hoenn they loved from Generation III, with a few extra twists. There are many miniscule differences - such as the replacement of trainers around the region - and a few rather large ones, like the Mauville City redesign.

Whether you are an old fan or new, there's plenty of reason to admire the differences and improvements GameFreak has made to Pokémon over the past 12 years.

Before I begin listing off what I believe are the best changes to the Hoenn region, I feel that it's only fair to make two things clear: 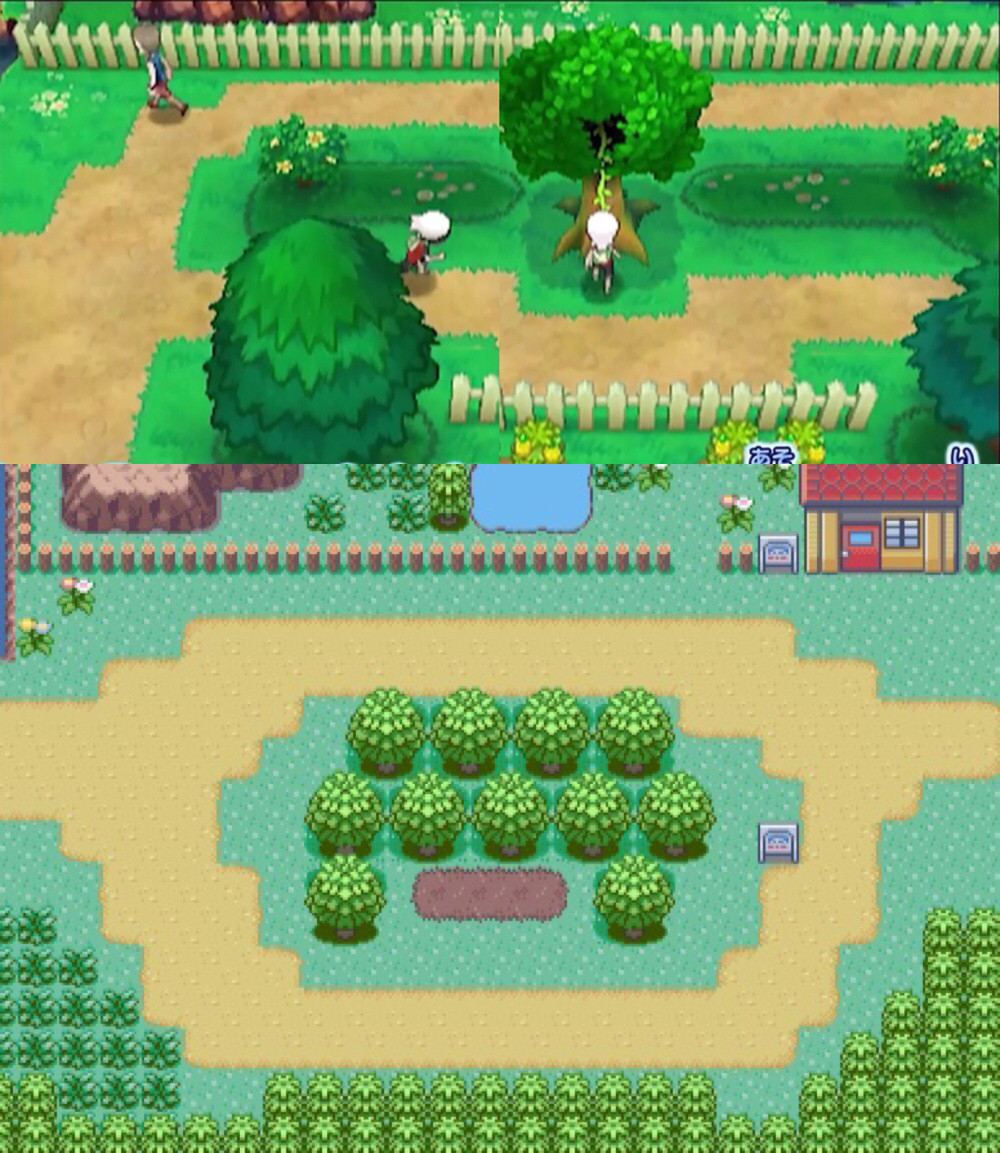 Mirage Island was something I never found in the original Ruby and Sapphire. And other than getting a super-special kind of berry used for contests, it was virtually useless. In these remakes, however, Mirage Spots replace the single, lonely Mirage Island. These Mirage Spots are a series of multiple islands that offer something useful every time.

This time around, Mirage Spots can only be found through Soaring with the Eon Flute, and are easily identifiable with a red star floating above the land-mass. Not including Mirage Spots that are exclusively for catching Legendary Pokémon, there are four different types of spots that can appear in the overworld everyday: Mirage Cave, Mirage Island, Mirage Forest, and Mirage Mountain. Each of these will have an item sitting out in the open, as well as a more useful hidden item - such as the Deep Sea Tooth/Claw or colored shards - waiting every day to be found. When you collect SpotPass data from the BuzzNav, new Mirage Spots begin popping up all over the map for use on that day. There are no hidden items in these locations, but rare Pokémon that aren't found anywhere else in Hoenn appear here. They've added many Pokémon to the different Mirage Spots so people have more opportunities to fill up their Dex.

I really like how they took a small feature from the original games and blew it up to a proportion so large that it stays relevant in the postgame.

The original Mauville City was arguably a small town with a few buildings. While the new Mauville City fits into Pokémon lore perfectly - seeing as Wattson originally said he wanted to completely revamp the city - it is shocking to walk into a place that you thought you knew so well and find that it's so different.

Ever since Generation V, Pokémon games have always had a big city in the region. These big cities seem to offer a nice hub for operations, and they often seem to hold almost everything a trainer might need.

Mauville City was revamped to include the Battle Institute, a Pokémon Massage Spa, A Mirror Store, A Ribbon Shop, A CLOSED Game Corner, A Cafe, a Food Court, Starter Move Tutors, a Bike Shop, a Second Floor Residential District, the O-Power people, 'Special' Pokémon experts, and a miniature Luminous Tower lookalike in the center, among other things. These big cities are a welcome change to the Pokémon multiverse. With more features and new Pokémon being added in every generation, there's no way we could get by without one.

The Battle Resort is an island just south of the Elite Four, where the best trainers go for some hot Pokémon battles. This feature unlocks right after the Delta Episode section of the postgame concludes.

The Battle Resort isn't just great for battles, though. This island is home to Move Tutors, akin to the ones from Pokémon Black 2 and White 2. You spend the BP that you get from the Battle Maison at the top of the hill (or the Battle Institute in Mauville City) to teach your Pokémon moves that they wouldn't be able to learn otherwise. They added a second Day Care Center run by the children of the original Day Care near Mauville. This Day Care is much more convenient in many ways compared to the first one you come across. The island is in a circular shape, allowing you to pedal your bike all the way around; however, it doesn't work perfectly enough to just nudge a coin under your Circle Pad and walk away.

The Day Care lad turns around when you ride in circles around the island, so it's perfectly viable to simply do that all day, and talk to him when you need an egg refill.

While the original plot hasn't changed too much from the originals, the details in the story do greatly differ. With Generation VI, GameFreak is able to incorporate subtle character animations to help breathe more life into the games. The animations, along with the stellar character development that managed to find its way into the remakes have blown me out of the water.

Every major character that you meet grows as a person, and isn't exclusively limited to a short-lived epic-Wally, like in the originals. Your rival, for example, gets a lot more 'screen' time in the remakes, and there are more battles to wage against them. Wally doesn't just battle you at the end of the game and disappear--in fact, he ends up following you all the way to the Battle Resort! Even the evil teams' leaders and admins have character development to speak of. Everyone seems to have a very distinct personality that is unlike anyone else in this game, and it's amazing.

Pokémon feels more alive than ever in Omega Ruby and Alpha Sapphire. If GameFreak keeps making stories of this size and proportion, I can hardly imagine what's next on their list of inconsistencies and surprises.

The PokeNav is a feature that I hardly used at all in the original three games. The only feature I remember from it was Match Call, which allowed you to rematch any trainer that registered your number, so long as they gave you a call first.

Since Generation III, the PokeNav has made it on to the Bottom Screen of the 3DS, and has four excellent apps that really make up the icing on top of a very wonderful, tropical cake.

The AreaNav displays your movements throughout Hoenn in real-time. Tapping on the map allows you to check a variety of things, such as Trainers that want a rematch, Secret Bases you've collected, or even Berries that you've planted.

The DexNav will display an arrangement of every wild Pokémon you can find in your current location. This feature allows you to sneak up on Pokémon, and chain them for good IVs, hidden abilities, hold items, and more. At its roots, it is a strong replacement for the PokeRadar. I've written a guide detailing all the fantastic features and how to use them.

The PlayNav brings back the bottom-screen features from Pokémon X and Y. These include the PSS (Player Search System), Pokémon Amie, and Super Training. This is where you will go if you want to EV train your Pokémon, pet them for a bit, or play with other people, online.

The BuzzNav is the last upgrade to the PokeNav Plus that you receive, and potentially the most useless, but don't make the mistake of thinking it's entirely useless. This will essentially relay news about some of the most trivial things, like what you buy in a shop to what moves you teach your Pokémon via TM. However, after the game has racked up a few SpotPasses, an icon of a Mailbox will appear over your BuzzNav app. Clicking on the Mailbox will unlock all StreetPass and SpotPass rewards you have received since the last time you tapped on it. This will unlock Mirage Spots accross the map, a variety of Secret Bases (assuming the spots aren't all taken), some interesting news on the BuzzFeed from their save games, and the potential to receive the elusive Eon Ticket from somebody that already has it. 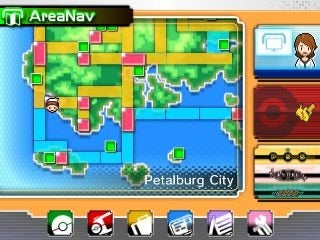 Pokemon Ruby and Sapphire didn't have a bottom screen, so it's interesting to learn what bottom screen features appear in each corner of the game.

While in a Contest, if you tap the Picture icon in the middle of the screen, it will take a screenshot of the top screen. After the Contest is over, it will ask if you would like to save the picture(s) that you took to the SD card.

While Soaring the Skies of Hoenn, the bottom screen will appear simply as a map of Hoenn, so you have a better idea where you're at.

While in Battle, the bottom screen acts as it normally would in a Pokémon game, with the option to Fight, use an item from your Bag, Run, or change Pokémon. They don't give you the option to change the background of your battle screen, like they did in X and Y; instead, weather effects will invade the bottom screen while in effect to remind you what the weather condition of the battlefield is like.

I'm really happy with a lot of the features that made their way into Omega Ruby and Alpha Sapphire.

These games have turned out spectacularly in many ways. They even found a way to get me interested in Contests, which have failed to capture my attention in every game prior.

Omega Ruby and Alpha Sapphire paint Hoenn in a brand new color, adding features that were only wild dreams from a child's heart twelve years ago. This is a huge step forward for the Pokémon games, and I hope to see GameFreak follow some of these practices in the years to come. (I'm cheering for you, DexNav!)