Everyone has their secret gaming wishes. Mine is an Uncharted and Tomb Raider crossover.
by Roy Kaiser

Every gamer has their secret wishes. Maybe you want a certain game to get a sequel, or a character to be introduced in the next game, or maybe you want a reboot of a classic. I am not alone in this. What I really want, is an Uncharted and Tomb Raider crossover. While I’d love a game, I’d be just as happy with a comic or even a book.

Uncharted is one of my favorite game series of all time, and when the Tomb Raider reboot was released earlier this year and was being described by some as having a bit of Uncharted to it, I had to get my hands on it. I did, and I loved it. And that’s when I immediately wanted a crossover.

I could never really see the pre-reboot Lara Croft and Nathan Drake meshing well, but with this new Lara I can definitely see it. Sure, Tomb Raider has a slight more paranormal or supernatural aspect to it, but it’s not like Drake couldn’t be confronted with something like that. I also think the age-difference would be an interesting dynamic – perhaps Drake sees a bit of himself in Lara? I have so many ideas. 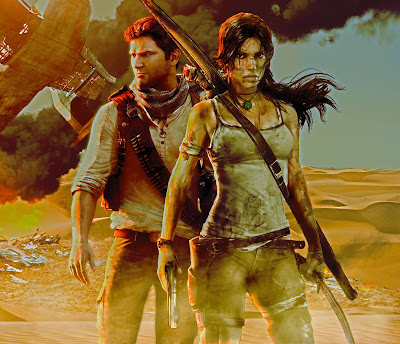 Sure, I know its wishful thinking. I understand the reality of the difficulties, especially since they are published by separate developers and Tomb Raider is a cross-console game, where Uncharted is PlayStation exclusive. Still, a comic would be way easier to do, right? And I know I’m not alone in my desire.

But, as I said, I understand the reality and like to think I’m a pretty realistic person. I may never get my crossover, but I can at least look forward to a Tomb Raider sequel – which was all-but-confirmed with the tie-in comic series announcement – and I am still hoping that Naughty Dog gives us Uncharted 4 when the PlayStation 4 is released.

What do you think? Would you want a crossover between Nathan Drake and Lara Croft?