A highlight of gaming's lesser known horror games. This week: Clock Tower 2: The Struggle Within!
by katlaborde

As we continue our look into the Clock Tower franchise, we hit our first bump in the road. Although both Clock Tower titles for Super Famicom and PlayStation were not perfect games, each featured unique gameplay as well as having interesting story moments. Clock Tower 2: The Struggle Within is not as fortunate as its predecessors.

Released for the PlayStation in 1998, the sequel to Clock Tower has absolutely nothing to do with the story events from the first two games. The gameplay remains the same as the first two titles, but Jennifer and Scissorman are noticeably absent. When released, the game was met with mixed to negative reception with reviewers citing issues with the game's story and gameplay mechanics. 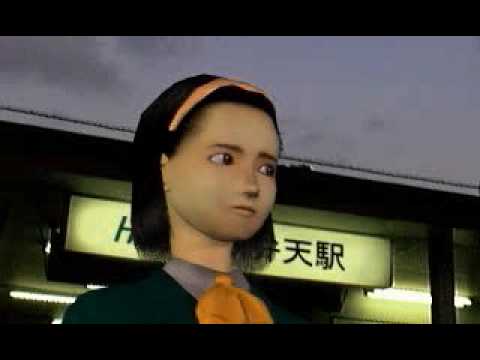 Even Alyssa knows this is going to be bad.

The story introduces us to Alyssa Hale, a young schoolgirl with multiple personality disorder. Alyssa's other personality is that of a cold-blooded male personality known as Bates. Alyssa has just been released from a mental hospital when she arrives at the home of Phillip and Kathryn Tate, her aunt and uncle. Not all is quite right in the Tate household as the Tate's youngest daughter, Stephanie, attempts to stab Alyssa with a knife. Alyssa soon discovers Phillip is keeping a statue sent to him by Alan Hale, Alyssa's father. Similar to the other titles, the statue is the cause of Stephanie's murderous intent.

The prologue is decent, it is certainly better and more exciting than the prologue for Clock Tower (PlayStation). However, after the prologue, the story gets really muddled and a bit silly. I know the other Clock Tower titles have a charming cheesy quality to them, but Clock Tower 2's story is ridiculous. I do not want to delve into the later story, for spoiler reasons, but I will briefly mention what happens after the prologue. 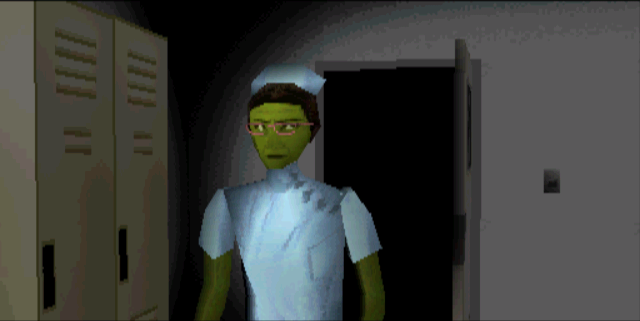 Someone thought this was a good idea.

After the incident at the Tate household, Alyssa wakes up in a hospital. Alyssa is speaking to another person about the incident when a scream is heard. When she goes to investigate it, she finds the hospital has been overrun with zombies. Alright. Yes, the Clock Tower games have had supernatural elements, but the zombies make absolutely no sense. The game's explanation for the zombies is they are a result of a family curse. If it is the same curse which possessed Stephanie, why didn't it turn Stephanie or the other Tate family members into zombies? The game is littered with similar plot holes throughout making it difficult to buy into the game's silly story. 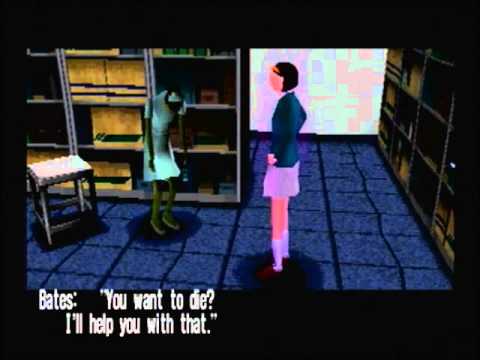 Bates takes over Alyssa or she is just being a jerk.

The gameplay is pretty much similar to the first two games with a few notable additions. In order to perform some specific actions in the game, Alyssa must allow her Bates to take control of her. Although this gameplay aspect is interesting, it is not executed very well. Frustration can occur if you encounter an event without the right personality often resulting in one of the many tacked on endings.

During the hospital level, Alyssa has the ability to shoot the zombies. With the game's point and click gameplay, this mechanic feels incredibly awkward. The mouse moves slowly making it difficult to aim at the target. Perhaps if you could play with a mouse and keyboard, it might be better. However, with a PlayStation controller, it is an absolute nightmare. Another problem with the gameplay is when Alyssa is being pursued. During the prologue, there wasn't much of an issue. However, when the game has zombies and a guy in an Oni mask pursuing Alyssa, running away becomes incredibly redundant. I am assuming the developer was trying to make pursuits more exciting, but with awkward shooting and clunky mouse controls, dealing with pursuits becomes tedious.

Finally, the game has a total of 12 endings, but the majority of them can occur during the prologue. In addition, the only difference between several of them is a snippet of dialogue. Unlike the other titles, the replayability is severely lacking with the sequel. I did not see the point of going back to see what happens if the difference is relatively minor.

Although my perspective on Clock Tower 2 is mostly negative, there are a few good aspects of the game. The prologue is interesting and exciting. I had a problem with Clock Tower's prologue being incredibly dull. The prologue for the sequel is reminiscent of a killer doll movie, like Child's Play, which is a lot more entertaining than talking to random NPCs. In addition, the added gameplay mechanic of switching between Alyssa and Bates is interesting, but is not that well utilized.

Overall, for survival horror fans, I can't recommend this lackluster sequel. Some of the cutscenes are good for a laugh, but watch them on YouTube instead.