Bethesda just released patch 1.03 for Fallout 4 on all systems. Announced in their latest release notes, the update weighs in at 500MB. Surprising visual improvements have been made to the console versions, with little cost in performance. Draw distance settings for geometry and foliage are among these graphical improvements. This is a great addition to the PS4/Xbox One versions of the game, and brings them closer to the look of the PC's higher fade settings.

PC gamers shouldn't feel shunned, as they now have access to a new ambient occlusion setting (HBAO+) as well as new fixes for gameplay, quests, and workshop mode.

Here's the list of new features that have been added to the patch:

Patch 1.03 also fixes some glitches, such as randomly teleporting while aiming a gun and corrupted save files. Now if they could only fix the broken fast travel system.... 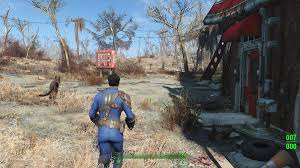 Overall, this seems like a huge win for the console version of Fallout 4. The only downside is freeing up enough memory to download the update.

What does everyone think? What would you like to see patched/fixed in the next update? Let us know in the comments below.