Pale Blue is an innovative 2D scrolling game in the works. Whereas most games, movies, and television productions tend to focus on the protagonists--what's good in the world--Pale Blue takes the view of evil.

They're not afraid to glorify the monstrous qualities of the game's main character, Ellen, as you scroll through a storyline that develops based on the actions you take at certain points.

The developers were generous enough to answer a few questions about the game for us, and I highly recommend you take a look at their extremely detailed, beautifully designed Kickstarter page. 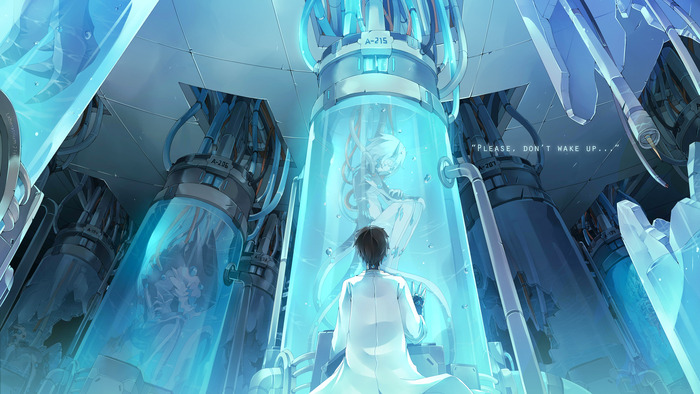 What was the original inspiration for Pale Blue?

Pale Blue concept was inspired by superheroes story, comic, movie, and animation we watched since we're a kid. We've been seeing our favorite superheroes fighting and defeating various kind of monsters, villain, and evil organization day by day, and we admire them. But then as we grow, we began to question a silly thing, like why do those monster and evil organization keep on fighting no matter how many of their own comrades shall die in each attempt to reach their goal?

From that thought, we're striving to tell the superhero story from a different perspective; the perspective of those monsters and evil organizations they fought every day.

The gameplay itself was inspired by the classic Metroidvania game, and also the classic Playstation game, Rampage, which also let players take the role as a giant monster who terrorizes the world. But instead of a simple smashing and wrecking things game, we're going to take an approach that tells the deeper story behind those evil and chaotic acts.

"From that thought, we're striving to tell the superhero story from a different perspective; the perspective of those monsters and evil organizations they fought every day."

The Kickstarter mentions the ability to "semi-free roam" during the game; with that in mind, about how long can users expect the game to take to complete?

The main story itself will take around 7-9 hours to complete.

Interactions with NPCs are designed to move the storyline along in different ways, using the simulator function--can you significantly change the course of the game if the player wants to change the course?

Simulator can only be used to replay the previous stage to improve score (which grant player additional bonus), or find bonus items that players previously missed. But it won't significantly change the story already going on. Although getting some items might reveal some new insight about characters or the universe.

"...We're focused on maximizing the single player experience of this game."

Several other characters similar to Ellen are featured on the page. Can we expect any of them, such as Tammy, to be available for play?

Yes, there'll be 3 playable characters: Ellen, Tammy, and Frei. Each of them has their own specialty and they'll be playable in some stages during the main story.

What's your favorite aspect of the game so far?

Our current favorite aspect of Pale Blue is that you can play as chaotic evil, who demolishes every building and eats every single human you find, or sneak around and only cause necessary damage and casualty. Both will give the character different atmospheres and will lead the player to different routes and endings.

We're so used to stories, movies, video games, and so on, focusing on the hero. In recent times, there's been a slight surge of more "evil-centered" content. What sparked your interest in producing a game in that manner?

It's because there are so many of those superhero stories recently introduced and reintroduced in movies, comics, or games. And our long life curiosity on how "monsters" see us, humans, from their perspective. Those two factors drove us to came up with this idea.

Can we expect any sort of online play, or leaderboards of some sort at some point?

We do have a plan to add some sort of co-op mode into this game (it might be possible to add it into our stretch goals). But for now, we're focused on maximizing the single player experience of this game.

The Kickstarter is set to close on June 19th. If fulfilled, when can we expect the game to be completed?

Our initial plan is to released this game around September 2015.

Any final thoughts or comments for the viewers?

We're inviting you to build this project together and make it comes true :)