Heroes of the Storm NA Spring Regional happening this weekend

All the information you need to know about the HotS NA Spring Championship.
by Kevin Cobban

It's going to be an exciting weekend for Heroes of the Storm fans. Blizzard and ESL are hosting the HotS NA Spring Regional in Los Angeles this Saturday and Sunday, where eight teams will battle for the championship.

But don't go rushing around for information -- GameSkinny has all the event coverage you need, so keep reading for match times, where to watch, who is competing, and what is at stake.

Matches for Group A will start at 12:00 CST on the 27th. The match-ups will be Team Naventic vs. King of Blade Alpha, and Panda Global vs. Tempo Storm, while Group B will be Cloud 9 vs Team Nom, and Team Blaze vs COGnitive Gaming. Each match will be best of three with a double ban system (ban 1-1, pick 1-2-2, ban 1-1, pick 2-2-1). Times for Group B are listed the same time as Group A, so it's safe to assume they will start afterward.

Watch all the matches over at the ESL HotS Twitch channel

Besides prestige, teams are competing for a $100,000 prize pool. First place earns $25,000, and the rest is split among other teams. Here is the complete breakdown:

However, even more exciting than the cash reward is the chance to represent NA at the HotS Spring Global Championship.

The winners of the NA Spring Championship and the runners-up will earn a spot at the Global Championship in Seoul, South Korea, where they will get the chance to compete against the best HotS teams in the world. Plus, the prize pool is raised to $500,000. 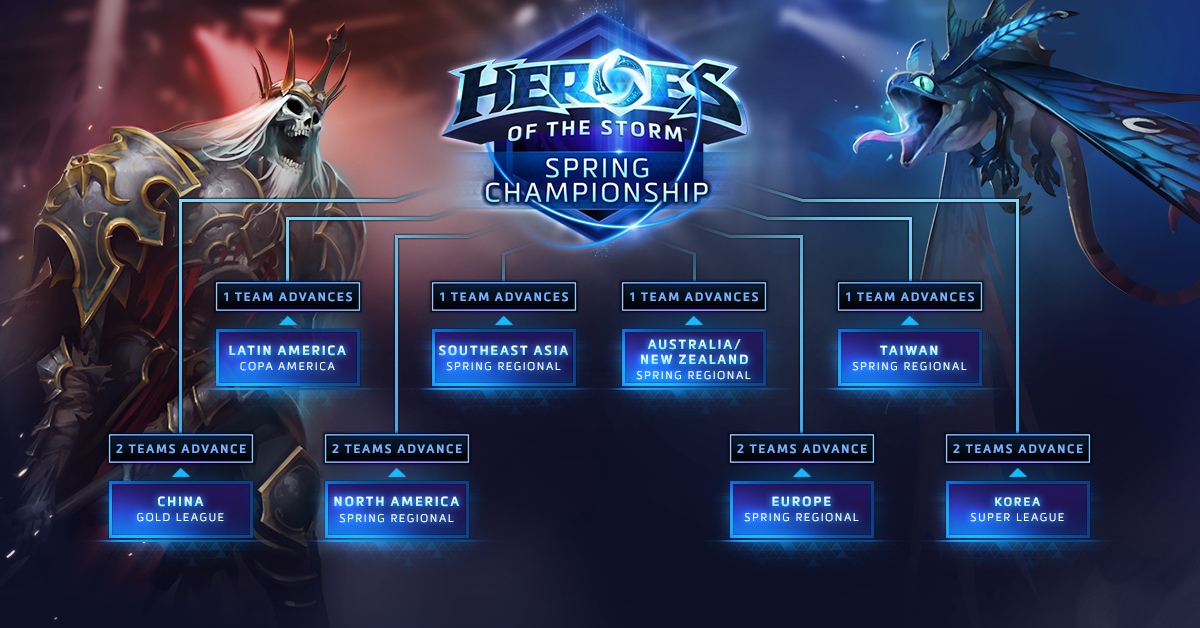 As for pre-game predictions, many think that Team Naventic will be the team to beat. They beat C9 during Heroes Rising back in January and took 1st place in the tournament. But like in any tournament, each team has what it takes to become champions, and we can expect great performances from every team.

Until tomorrow, you can keep up with last minute updates on Blizzard's Twitter @BlizzHeroes.