A brilliant anonymous artist placed a massive "bronze" statue of Pikachu in the middle of a park atop an old broken down fountain to honor Pokemon Go players everywhere.
by Joshua Harris

Residents of the Lower Garden District woke up on August 1st to find something amiss in their neighborhood. Amid the media frenzy spawned by Pokemon Go such as New York Governor Andrew Cuomo calling for restricted access to the game by sex offenders, players clashing with veterans at a memorial park, even the CEO of Niantic's Twitter account being hacked, one anonymous person has taken it upon themselves to create a work of art dedicated to the game that has brought millions of people closer together.

Perched atop the remnants of the old fountain pictured above, a massive stone statue of a Pikachu was assembled overnight as an homage to massive influx of fans during the peak of the Pokemon Go craze. The Poke-monument was not sanctioned by the city, and it is not clear who erected the statue in such a short amount of time. The statue itself is hollow and the base is cement, but the artist put in the time to cultivate a weathered, faux-bronze monument aesthetic. The statue displays a Pikachu with its arms crossed in such a manner that depicts as tough and powerful. The cement base is a massive Poké Ball, a beacon for all wandering trainers in the Lower Garden District. Its presence is a reaffirmation of the joy and the sense of adventure that trainers feel when they set foot outdoors, and hopefully it continues to be an inspiration to the Pokemon community. 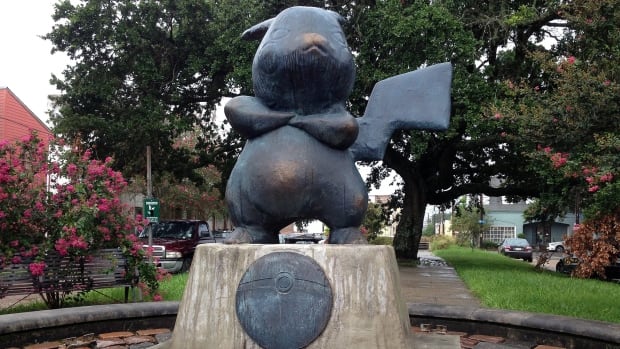