Maxis has posted a first draft of user guidelines for mods for SimCity, and is asking players what they think about them as a prelude to possibly including full modding support. What does this mean for the game's DLC?
by Wokendreamer

SimCity has had a troubled history since its latest incarnation came out.  Even ignoring all the technical issues, whether they be non-functioning servers or patches causing more bugs than they fix, the game is undeniably a different experience from what many people were expecting.  It just might be possible they will gain some ability to build the experience they wanted, however.

Maxis has a post on their official forums detailing what the company calls a first draft of potential user-generated content guidelines.  Apparently they are giving serious consideration to allowing open modding support for the latest SimCity, and they want to hear what the community has to say about the idea.

Aside from getting players to share their thoughts on how to deal with modders who take things too far, Maxis is also looking to hear what the players of their game think actually constitutes going too far.  As the post itself puts it,

It's difficult to determine what makes a 'good' or safe mod and what mods cross the line. Clarifying guidelines for UGC will help players understand where that line is and protect both our UGC and non-UGC community.

I think this forum post also hints at something about as interesting as the mods themselves. 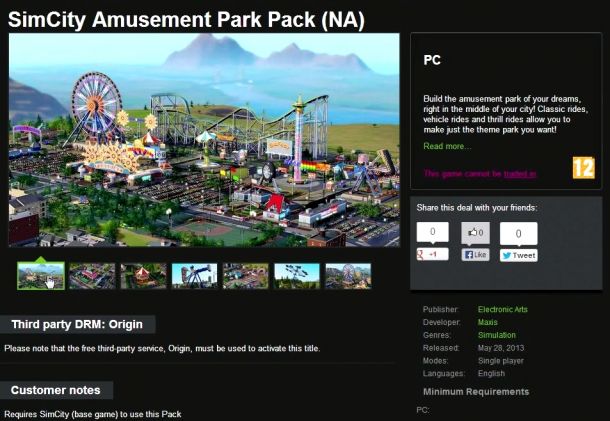 SimCity has already seen some downloadable content available for sale.  Open mod support would enable anyone who wanted to to create their own freely available copies of any cosmetic DLC ever created, and potentially even DLC with extra features.  Underestimating the capabilities of modders is something one really should not do, and one look through some of the mod databases for Skyrim or the custom maps for Starcraft 2 is ample evidence of that.

As exciting as the idea of open modding support is for SimCity, does this mean Maxis and EA have given up the idea of trying to create more DLC for the game?  Will they just make DLC too closely resembling paid-for content against the user-generated content guidelines?

Only time will truly tell, but taking something this potentially direction-changing for granted is not something I can really do.