Fans of the X series will love the new X4 Foundations, but new players will find it incredibly hard to get into.
by Sergey_3847

X4 Foundations, the new single-player space sim from Egosoft, is a game so grand and complex that it would take many hours to explain every single detail of its intricate gameplay mechanics. But let's try at least to cover some of its most distinctive features that set it apart from the rest of the games in the X series.

As before, the universe in X4 Foundations is divided between the main factions represented by various alien species. These can become very helpful when it comes to such activities like trading and mining, but of course, one can also go against these institutions. The choice is all yours and that is the beauty of the X series of video games.

Although factions do play an important role in the game, there is a lot more to discuss, so jump in if you want to know more about the fascinating universe of X4 Foundations.

X Universe Through the Looking Glass 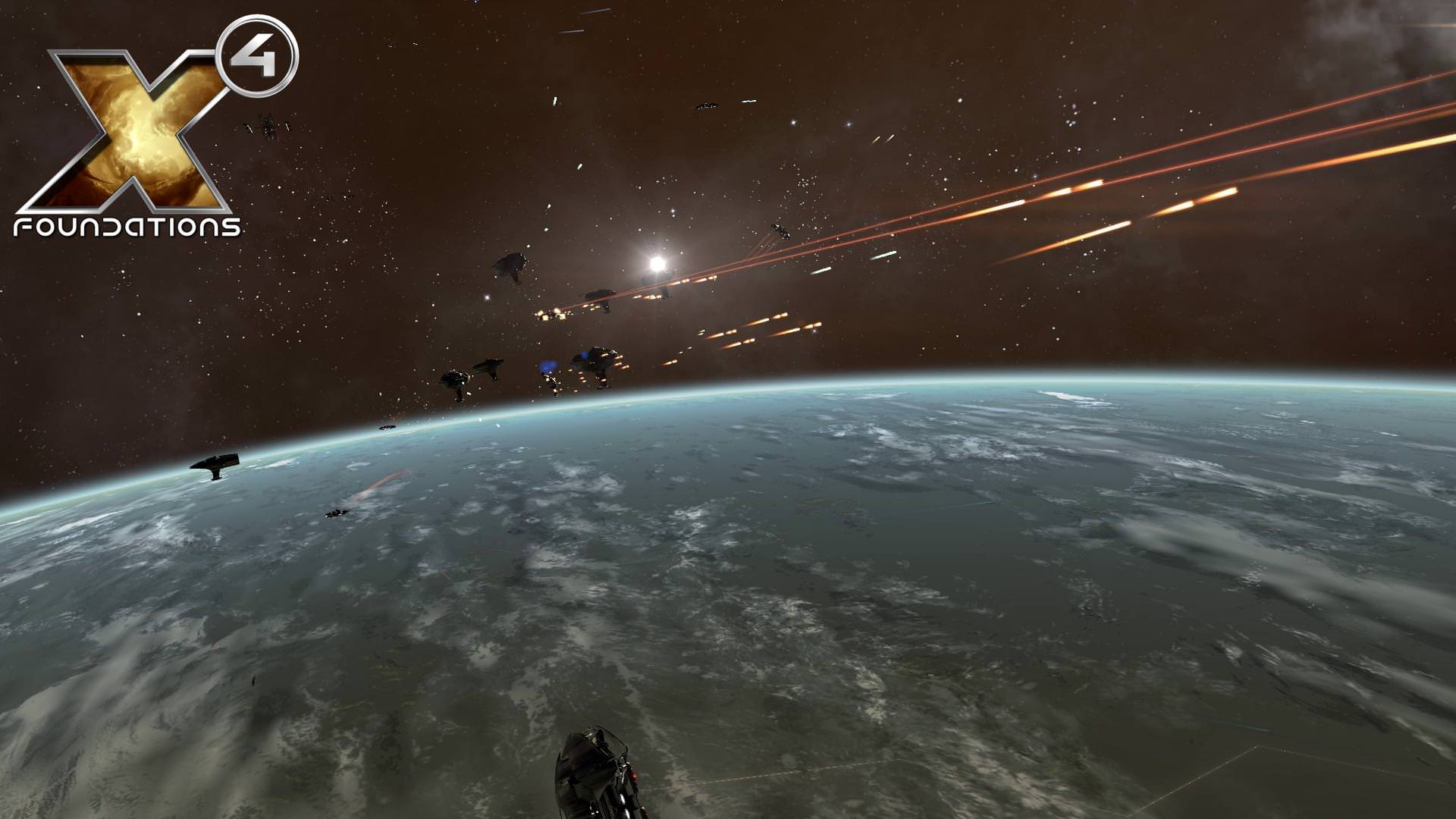 German video game developer Egosoft is a well-established name in the world of space simulators. For the last 20 years it has been developing only one series of games -- the X series.

It has become a worldwide phenomenon due to its incredible attention to detail not only when it comes to piloting a spaceship, but also taking part in the galactic economy and building your own space stations.

X4 Foundations follows suit and incorporates the best elements of the last few games, especially X3. But if you never played the previous games, then it may take some time before you really get the grip of all its mechanics.

The story of the game also doesn't exist in a vacuum but continues after the events that took place in X-Rebirth and is affected by the events from the previous parts of the series as well. So it's really hard to put the story into a more or less clear perspective unless you want to read the extensive lore of the game in the official wiki.

The AI in X4 has also been improved and the factions act in a non-linear fashion, meaning that every time you start a new game, it will develop in its own unique way. This means that the replayabaility of X4 is really high. 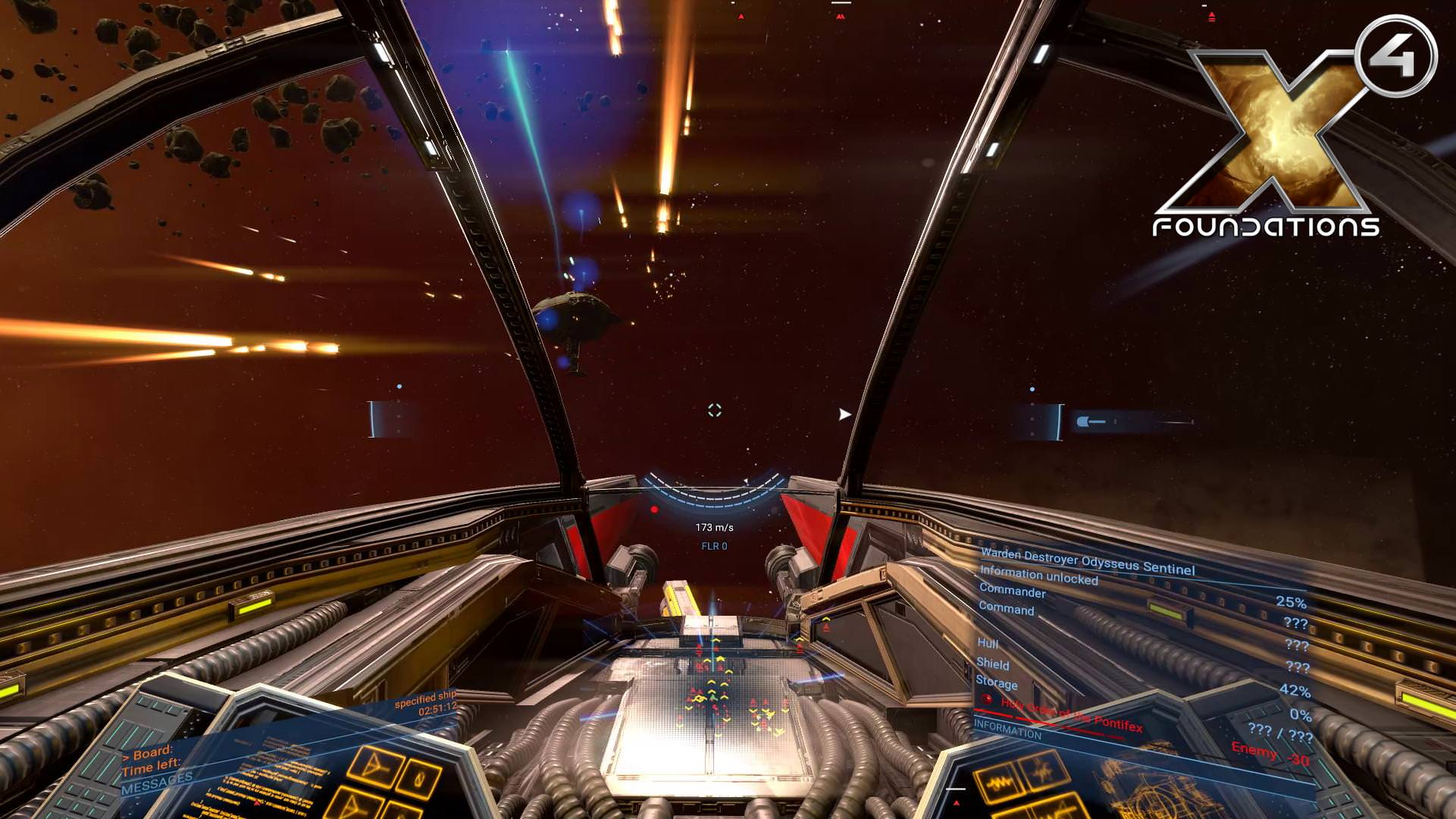 There are numerous gameplay mechanics in X4 Foundations, and it would be impossible to cover them all in one review. But here are a few of the main points that have been implemented in X4.

Of course, the main tool of any X player is their spaceship. Egosoft offers four types of ships in the game: small, medium, large, and extra large. The latter two serve as carriers and destroyers. But you can be efficient in combat using small or medium vessel just as well, if it's properly upgraded.

You can pilot a ship on your own or set it to one of the automatic travel modes. In any case, the best way is to hire a pilot and just do something else instead. This is really a neat feature, which makes you feel like a real boss giving orders left and right.

Ships can be upgraded with weapons of various types starting from simple lasers and finishing with heavy turrets. The upgrades and repairs are available at any Wharf or Shipyard. All you're left to do is get some money to be able to afford the payments.

In X4 it is now also possible to apply unique paint jobs to your ships, which is a brand new feature available to all Egosoft forum users.

One of the biggest differences players will see in X4 is the ability to build space stations using separate modules. Players can also choose which modules they want to use, and thus create completely unique stations in terms of design and infrastructure.

However, a few things must be done before the station comes into being. One must first buy a plot in space, acquire necessary blueprints, and even pay taxes to the faction-owner of that area of space. So it can get rather hectic out there, if you don't follow the rules of the galactic empire.

Trading is unsurprisingly one of the most important aspects of X4. Here you can trade wares at stations that produce and sell them. You can see the changes in pricing and other trading movements through the map menu, which can be viewed in both 2D and 3D perspectives.

It is also possible to influence the prices of certain wares by intercepting signals coming from trading ships and destroying them. The changes in pricing will be affected immediately, and by creating scarcity on the market your own trading missions will prosper.

Auto-trading is another option in the game, which allows players to send special trading ships to do the job for you. But usually, this kind of activity can go wrong in many different ways, so it is better to control everything manually, unless you don't care much about this aspect of the game.

You can also create a mining conglomerate, which is a new mechanic that allows players to diversify the economy of their empire. There is a special mining type of ships, which can be acquired, upgraded and repaired if needed be. 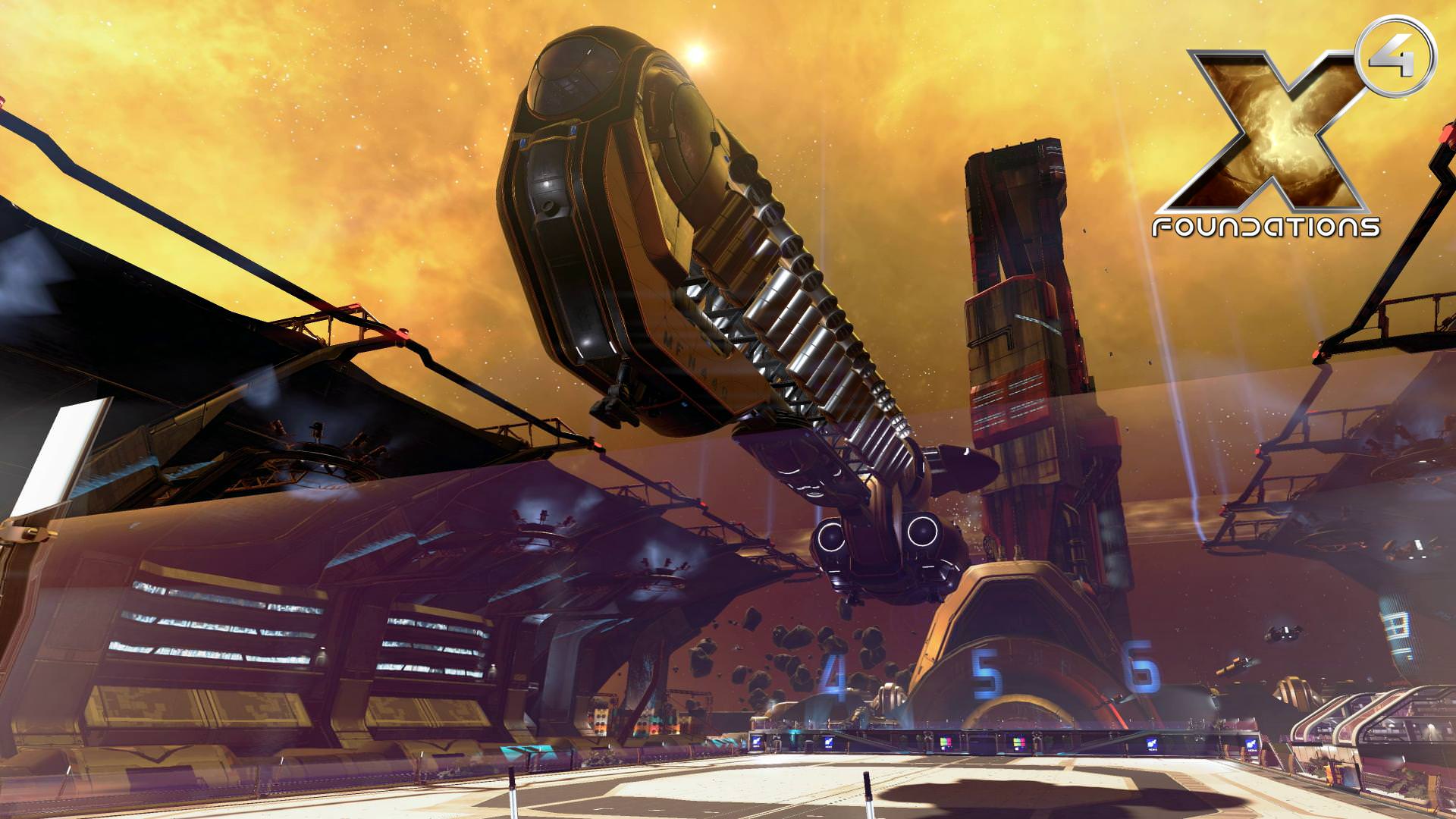 X4 Foundations does look great on the surface, but right now it is still in a rather raw state. This is actually completely understandable, as the game of this scale is hard to complete in just a few years.

Look at the games like Star Citizen or any other ambitious space sim that is basically in a state of eternal development that never stops. X4 devs definitely created a good foundation for their new game, but it still needs a lot of work.

One of the biggest issues for any PC player is the ability to feel comfortable with the controls using just a keyboard and a mouse. But the game offers you to use gamepad from the very beginning, which is a bit suspicious.

It is just really uncomfortable to use the default tools to play X4 and you really need to purchase a gamepad, if you want to play without constantly looking at what keys you need to press.

X4 is more of a space sandbox at this point, which can appeal to a number of players and completely retract players who want a solid single-player campaign. There is main story in the game, but it's really short and just plain underwhelming.

In the end everything boils down to simple grinding and farming resources. Obviously, people who are used to this type of gameplay will find it engaging, but new players will see it as just plain boring.

Combat needs some serious re-balancing, as right now you can intercept and board the biggest ships in the game using the S-class combat ships, which are the smallest.

Of course, your vessel needs to be upgraded to be able to do this, but giant ships can't hit you with their turrets anyway, which makes them an easy target.

These are just a few issues that need to be addressed. Economics and NPCs also need to be improved. But the biggest obstacle for new players will be the game's menu, which is almost intimidating when you look at it for the first time.

If you treat it as a trading simulator, then it has a great potential, but the current system is unbalanced, especially when it comes to auto-trading. It needs better configuration, which should serve players' needs and not surprise them with a market crash in the middle of the game.

If you treat it as a combat simulator, then you're in a slightly better position. Combat can look really good, but there isn't much action happening in this single-player game. Lots of other online space sims offer a much better combat experience these days.

Lastly, X4 simply needs to be better, and fortunately there are plenty of mods already that fix a ton of issues. But we all know what the great number of mods means for any game -- that it is raw and unfinished.

X4 Foundations is undoubtedly a very interesting game. But it's 2018 and the competition is so huge that the long-running X series is not at the forefront of things anymore, but is barely catching up.

[Note: A copy of X4 Foundations was provided by Egosoft for the purpose of this review.]

Our Rating
6
Fans of the X series will love the new X4 Foundations, but new players will find it incredibly hard to get into.
Reviewed On: PC
What Our Ratings Mean