Sublevel Zero Redux isn't a bad game as much as it's a disappointing one. A roguelike with uninteresting mechanics, SZR ultimately crashes into the ceiling it hopes to shatter.
by Jonathan Moore

When I first hopped into the cockpit of Sublevel Zero Redux, a painfully faithful port of Sigtrap Games’ 2015 PC space shooter, I thought, “Yep, this definitely feels like Descent.”

At its core, the most disappointing thing about Sublevel’s debut on next generation consoles – both the PlayStation 4 and the Xbox One – is that the game commits nearly all the same sins as the original PC version, while still teasing us with a true successor to Descent. Sure, there’ve been a few tweaks and updates for consoles here and there. But overall, the game still suffers from the same handicaps it did when it originally released on Steam.

A visually appealing voxel-based roguelike, Sublevel Zero Redux at first breathes life into the increasingly tired FPS scene by recalling bits and pixels of the genre’s halcyon days -- but it ultimately leaves the genre once again gasping for air through repetitive, rote gameplay that only becomes less and less fun the longer you play it.

But first, before we talk (more) about what doesn’t work, let’s look at what Sublevel Zero Redux gets right.

Like Descent before it, the zero-G flying in Sublevel Zero Redux is fluid, yet tight and responsive. It’ll definitely take you a few minutes to acclimate yourself to the controls, since a standard controller just isn’t the best option for this type of 3D movement (I prefer a mouse and keyboard for more precise control). And while whipping a space ship around in a true 360 degrees can be discombobulating at times, when you do finally get the hang of it, it’s one of the most satisfying parts of Sublevel Zero Redux.

Sure, there’ve been a few tweaks and updates for consoles here and there. But overall, the game still suffers from the same handicaps it did when it originally released on Steam.

Whipping through underground trenches is a blast, and flitting through tight corridors with a trove of infernal, angry machines on your tail will instantly give you an adrenaline rush. Flipping around to snatch loot, ammo, and ship upgrades is easy, too, while flying through explosions and zeroing in on your targets gets easier the more you play.

It really is a testament in attention to design that Sigtrap so faithfully recreated the feel of Descent and its groundbreaking ease of movement. If I could rate Sublevel Zero Redux on its flying mechanic alone, the game would be a stellar representation of upper echelon space navigation. Sadly, I can’t – and its other hiccups just get in the way.

Just like in the original, loot is a big deal in Sublevel Zero Redux. It’s everywhere, and it’s the primary method by which you upgrade and craft modifications for your ship -- whether that be a new, shiny hull, a blisteringly accurate chaingun, or a plasma laser.

On the surface, loot is an invariable staple of roguelikes and their progression systems: you play the game, you get loot, you die, you upgrade your ship, and you start again with bigger and better gear, making you fiercer and deadlier.

However, the problem with the loot system in Sublevel is twofold:

So ... maybe that very last part is a little bit of hyperbole. Perhaps the loot is helpful. But it takes so god-awfully long to get any gear that provides any type of discernable difference in combat that there’s little the procedurally generated world can do to ameliorate that feeling of grindy repetition.

And when the only thing bringing you back to Sublevel’s corridors is the loot – because there’s no gripping story or unique conceit to continually pique your interests – that’s a problem. Don’t get me wrong: I understand games like Rogue Legacy and FTL use loot progression systems to keep players coming back. But they have more going for them than the loot. 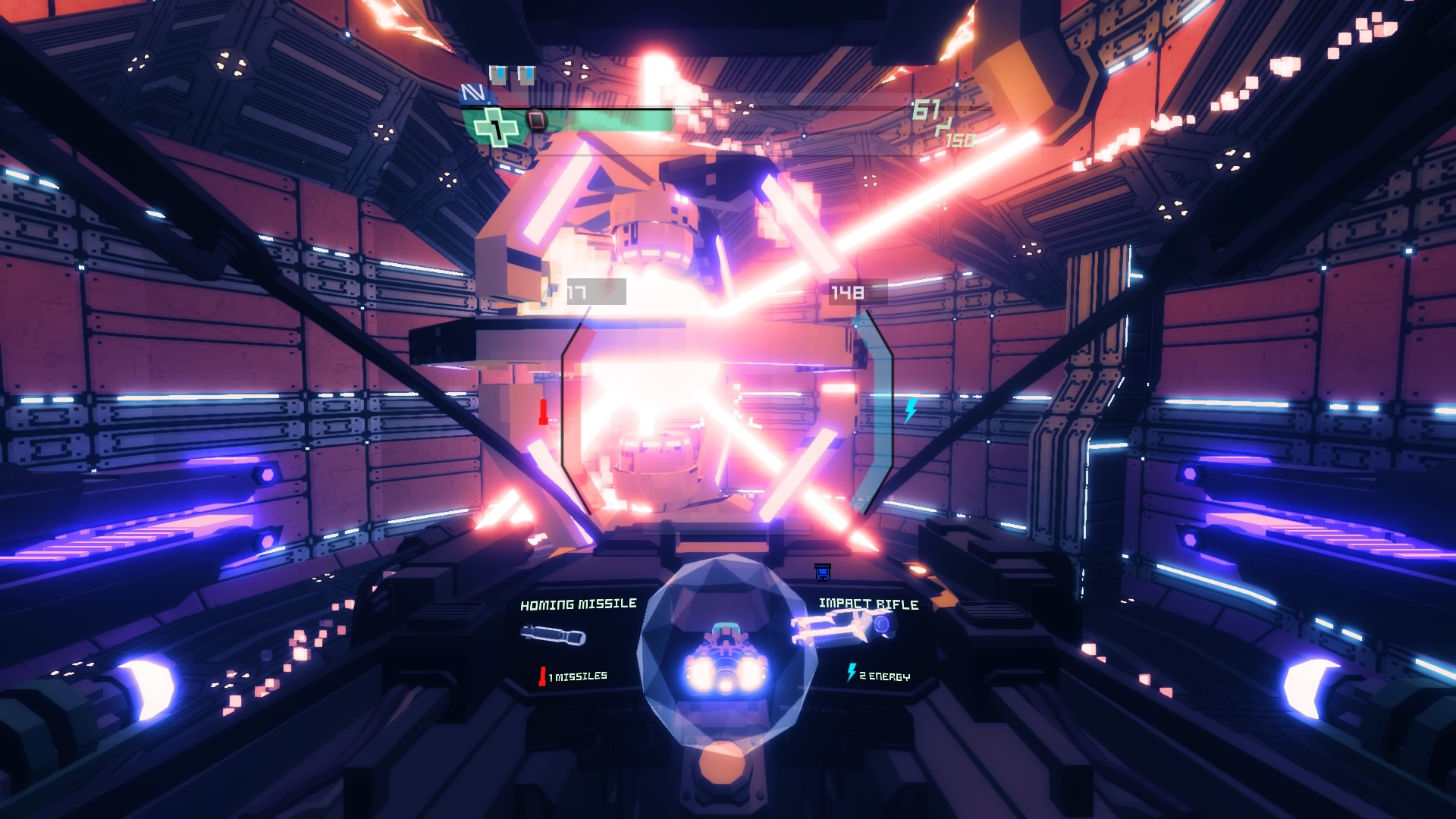 They have (more intriguing) stories. They have interesting and gripping conceits. They have more robust and engaging combat. The list could go on...

In fact, having played the original Sublevel Zero on the PC, it’s profoundly disappointing that the loot system doesn’t make the game as enjoyable as it could or should – and just like the original, Sublevel Zero Redux is just plain boring after a while. When you’re picking up the same things over and over again, and new loot doesn’t stand out from the hundreds of pieces you’ve just picked up, it’s a slog to upgrade your ship to the eviscerator the game wants you to be.

Even the crafting system, which appears unique and full of potential on the surface, doesn’t do much to advance the gameplay. Even it feels locked into the vicious cycle of spawn-grind-die-repeat, because it doesn’t offer any interesting way to circumvent the loot-loop paradigm. Invariably, you won’t craft any piece of gear that’s exponentially more powerful than anything you’ll find scattered across any one of Sublevel’s maps.

And that’s not only a shame, it’s a lost opportunity to make a truly unique system shine. 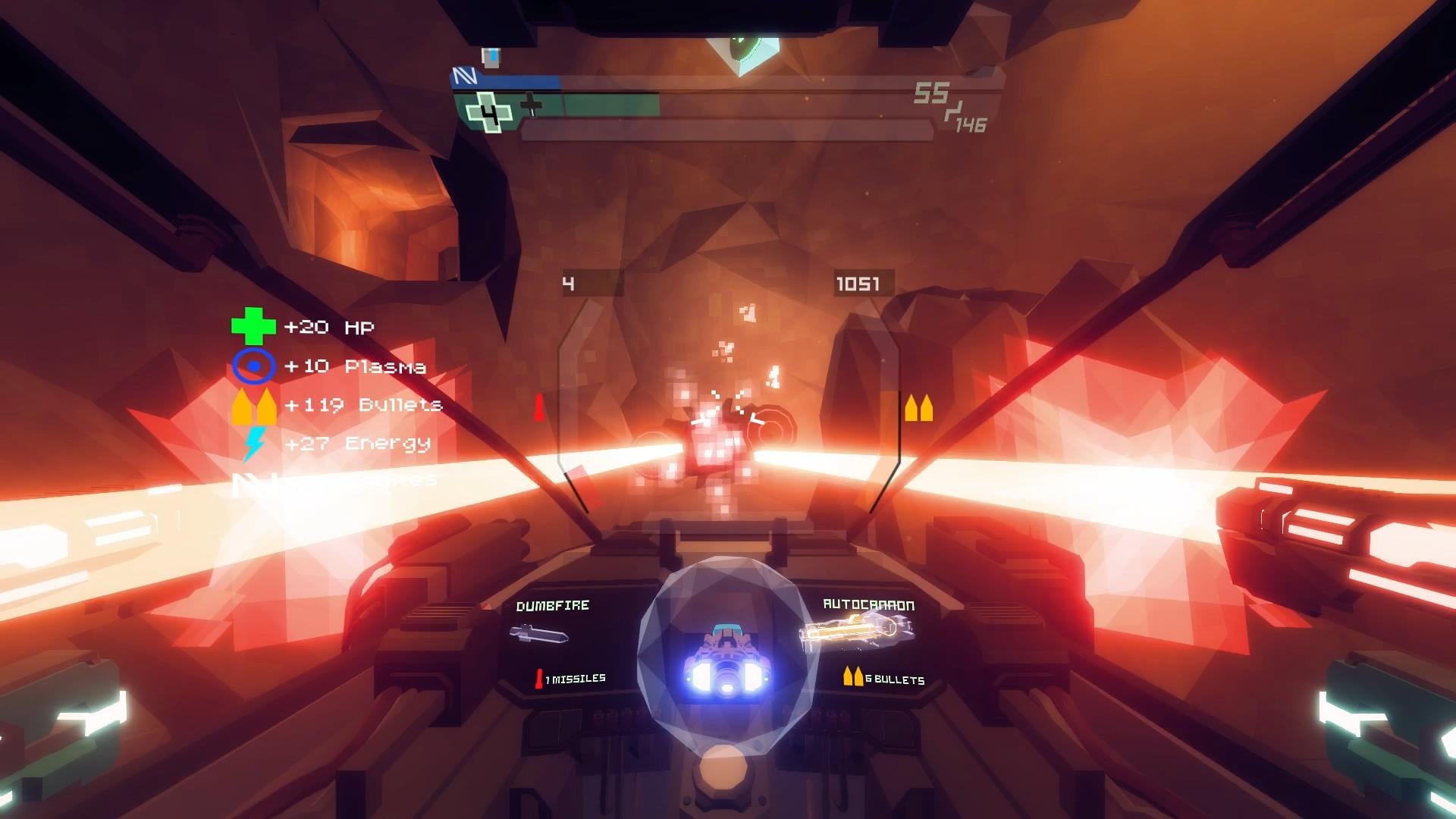 One of the very best things about Descent was that the combat often became fast and frenetic, even in tight corridors. Sure, there were stealth elements scattered throughout Descent's levels, instances where you were required to slowly creep through doors and peek at the enemies inside before entering. But in Sublevel Zero Redux, you’ll feel like you’re sneaking more than you’re ace-blasting enemies in a zero-G dogfight.

This is partly because of the game’s procedurally generated maps. Die in one playthrough and you’re taken back to the beginning of the game – except all the levels have changed. It’s the hallmark of the roguelike. But here it hurts the pointed vision Sublevel Zero Redux chases after: being like Descent.

On top of that, Descent wasn’t centered on loot, but instead used loot as a single component to enhance its core point system, which drove players to continually chase after their own scores on a per-level basis. And its combat mechanic reflected that because interchanges between your ship and the belligerent bots chasing you through stages (or strategically positioned inside Descent’s labyrinthine maps) just felt more dangerous because they’d take you head on -- more often than not.

In Sublevel Zero Redux, it feels like bots are (more often than not) hiding from you. This leads to a stealthier, more deliberate combat that just feels weird when you’re piloting a lightning fast, armed-to-the-teeth ship in zero-G space.

I could more easily forgive it if this were the exception, but unfortunately, it’s the rule – and that’s disappointing.

Sublevel Zero Redux is a next-gen port of an OK game. It’s not broken by any means, but it also doesn’t bring a lot to the table in terms of replayability. Like most roguelikes, it’s a difficult game to get through, but not necessarily because of its difficulty. Instead, it’s arduous to get through because there’s really no end game to be had. Starting over again and again after each permadeath quickly turns into a nightmarish Groundhog Day you’ll never be able to escape -- unless that's your brand of masochism.

If you enjoy roguelikes, you may find something you like here. Sublevel Zero Redux isn’t the worst game you could buy. It’s an OK buy – but really, that’s why it’s so disappointing.

Even with 70 new rooms, new enemies, and new mechanics like teleportation, Sublevel Zero Redux could have been so much more.

Note: A copy of Sublevel Zero Redux was provided by the developer for review.

Our Rating
6
Sublevel Zero Redux isn't a bad game as much as it's a disappointing one. A roguelike with uninteresting mechanics, SZR ultimately crashes into the ceiling it hopes to shatter.
Reviewed On: Playstation 4
What Our Ratings Mean