Despite some original ideas and a wealth of content, CastleStorm chokes on it's own ambition by lacking the follow through necessary to truly stand out. It is an incredibly boring yet unique game.
by Elijah Beahm

The following review is for the PS Vita/PS3 versions of the CastleStorm.

I love hybrid games. They always have something new to offer even if they don't always hit their mark. Warhammer 40k: Space Marine brought brawling mechanics and sensibilities to third person shooters; Sanctum is arguably one of the better shooter/tower defense games on th emarket; and Natural Selection 2's FPS/RTS asymmetry actually got people to follow orders in a multiplayer game so that's something in of itself. So why is it I can't help but feel my brow tense at the very thought of picking up CastleStorm again? 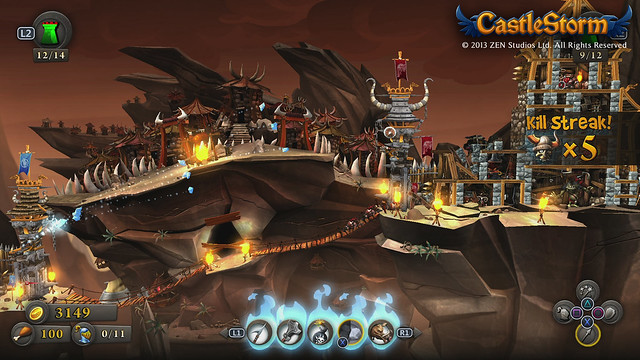 CastleStorm is definitely a strange game to describe. Imagine Angry Birds combined with MOBA elements and a vague sense of RTS gameplay all done on a 2.5D plane. Despite throwing all these clashing elements being forced in one package, the actual execution is above average. There's a clear sense of design to make everything fit together, and it works well enough for most of the game's first campaign. However, by the time your first campaign is done, you start to see the problems.

Your primary means of playing the game firing your ballista, using different infantry and castle destroying projectiles. Ammo ranges from spears to sheep that fart rainbows, but you can only use five of the nine ammo available, so there's some strategic planning to it. Unfortunately you'll never really feel that much need to experiment since the explosive apple and stone that splits into three stones are the most powerful ammo types for castle destruction. Everything else does barely any damage to castles until you unlock a new room for your castle that increases ammo recharge speed for faster firing.

There's no deep strategy to running your army other than build orders. Handling soldiers is simply a matter of selecting five different troop types, putting a room for each in your castle, and then earning enough of the auto-generating food supply to spawn them.

Picking off infantry is fun at first, but you come to realize that precise headshots are more tedious than rewarding when trying to pull them off on either PS3 or PS Vita. What's more annoying is the delay between telling your troops to duck and your actual shots fired. I could hit X and O simultaneously and I still had a 50/50 chance of shooting one of my own men in the back of the head. Yet despite their eagerness to stand up for the slaughter, they put almost no effort at trying to fight back until a fifth of their healthbars were gone.

There's no deep strategy to running your army other than build orders.

Handling soldiers is simply a matter of selecting five different troop types, putting a room for each in your castle, and then earning enough of the auto-generating food supply to spawn them. Here is where one of the game's key problems lies though. You'll initially start off with just regular soldiers and archers, and can upgrade them as you progress through the game. However, despite getting my regular soldiers past level 4 status, they still died due to the very small incremental increases in their stats. If I had known I'd be getting stone golems and knights down the road, I would have just saved my money and invested in the only slightly more costly but far more effective units.

The game doesn't give any indication what new mechanics and twists it has next until they happen, and then forces you to grind to be able to actually use them. What's worst of all is that once you finally have them all, much like the ammo types, there are only a very few that are worth using, and at least one pair of choices that are redundant.Archers, knights, and golems are incredibly powerful and far more worth the cost than any other infantry unit.

There's no to make real strategic decisions other than using magic spells to protect or health them briefly, so they just wander back and forth across the single battle lane. The only aspect that does give flexibility is the magic system, with several useful spells that can change your playstyle. However they all have long charging timers and to cut down on the timers you need to, you guessed it, grind to get better versions through stat upgrades. 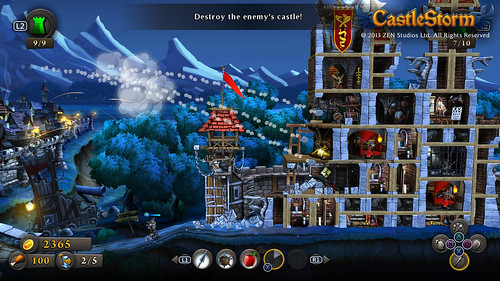 Angry Birds Vikings By Any Other Name

Despite being a single purchase $10 game ($15 for the Complete Edition), CastleStorm has the sensibilities of a free to play mobile game. The excessive grinding, the incredibly light depth of strategy, and gameplay that hardly seems to need a controller to work all scream "this was meant for an iPad". Now that's not inherently a bad thing; I've played games made for both commercial and F2P mobile release before that worked quite well. Except those titles would adjust themselves depending on the platform. Not everyone wants to replay missions to grind themselves into a decent state of play twice across two campaigns (four if you have all the downloadable content). That's not replay value, that's padding the game's length.

It also doesn't do the game any favors that its downloadable content campaigns both start off with tedious brawler missions. By tedious, I don't just mean drawn out and unnecessary considering how bland playing as a hero character for longer than ten seconds is. No, Zen Studios thought it would be a great idea to just throw tons of enemies in massive numbers with faster attack speeds coming from all directions at you for the opening missions of each DLC campaign. I couldn't even get into the third campaign because of how sheerly difficult it was to survive.

I want to be very forthcoming in this respect: it was such a pointless grind I could not finish portions of the single player after completing the game's initial campaign offering. There was literally no forseeable investment other than further unlocks to continue replaying the same missions over and over again to get more upgrades, with no variations other than what powers I brought to the table while dealing with severely dull gameplay. You can't import the gold you've earned to different campaigns unless it's unspent, even though some infantry units are little more than reskins. This means every time you start at the bottom of the barrel and have to climb your way back to the top just to go back to ground zero again. I'll give you three guesses who the main villain of the game is.

There are some additional single-player options such as one-off skirmishes and survival modes based on campaign missions, but they're still just the same thing with a slight retooling, and show just how much the game expects you to grind. You could be level 1 but by a second wave of enemies will see level 8 opponents. You can't upgrade mid-battle, so this means you're locked in until you lose if you want to earn gold from these battles. Instead of making me want to get one more improvement for my units every time, it was demoralizing looking at just how hard I had to work to stack up against the game's AI.

As if this weren't bad enough, multiplayer is ANOTHER grind that ignores all the upgrades you've made in single-player. You can do split-screen multiplayer and online multiplayer, ranging from one versus one matches to two versus two. If you at least carried progress over for each faction that would be something, but that is not included. Possibly the worst sin of all though is that there isn't even cross save functionality between Vita and PS3 despite it being a cross-buy game.

This is sadly the case with CastleStorm. I'd love for it to be my "weird little indie game" of the year. It has all the right building blocks to be an amazing game. Somehow Zen manages to bash those ideas so repetitiously over your head though that it dulls your very sense of enjoyment and novelty, leaving nothing but boredom.

Yes, you read that right. You have to do EVERYTHING AGAIN on PS3/PS Vita after you beat it all on the platform you started with. You can't even import your customizable castles. You effectively have eight same-y campaigns with similar factions doing similar objectives with similar powers in-GAH! This game. Needs. Variety. Also it's soundtrack could do with more than the four songs I kept hearing end on end, looping without any pause. It's a perfectly good concept and one I'd love to see expanded upon, but the execution here is incredibly single-minded. It's like no one thought that it should still have more to show than a single new idea.

No that's not Barbie hanging over the game's logo.

A Spear to Royal Keep

I understand that developing new modes of play for a unique style of gameplay is difficult in many cases, but that doesn't change the fact that making a game monotone is bad for its longevity. Why do you think Wildstar has platforming? Why did several Final Fantasy games feature off-beat side quests and fully fleshed mini-games? Why is Watch_Dogs including a robot spider mayhem mode? Because now and then you need a breather. If you can't get that breather in a game, you will leave it, and by that point the chances of you coming back to it begin to decrease drastically.

This is sadly the case with CastleStorm. I'd love for it to be my "weird little indie game" of the year. It has all the right building blocks to be an amazing game. Somehow Zen manages to bash those ideas so repetitiously over your head though that it dulls your very sense of enjoyment and novelty, leaving nothing but boredom. It's a waste of a good concept by handled poorly by a developer of games I've otherwise enjoyed. I don't know what happened, if it was just a bad call by the lead designer or if it just wasn't in the budget, but this game lacks life despite its wide range of content. If you can handle the constantly repeating mission types and ideas, you'll be able to find something in this title. Everyone else is better off looking elsewhere.

Our Rating
6
Despite some original ideas and a wealth of content, CastleStorm chokes on it's own ambition by lacking the follow through necessary to truly stand out. It is an incredibly boring yet unique game.