Need to Feel In Charge for Once? Try Plague Inc.

You may be suffering from symptoms present in Plague Inc. and it just may be the beginnings of a pandemic--Beware!
by MirandaCB

Strategy isn't my middle name, but that doesn't mean I don’t enjoy them. I found Plague Inc. today from Ndemic Creations and I’m currently playing it as I write.

What It’s All About

The premise of Plague Inc. is to exterminate the world with a pathogen, beginning with bacteria. You choose a country to infect first, then use DNA points to evolve your little bacterial buddy. The way you evolve your plague determines how fast it spreads, where and how it can thrive, the symptoms it possesses and the lethality of it.

Gradually the country you've chosen becomes overrun with red dots, or “Infected.” As the infection spreads, you pop red bubbles with the bio-hazard symbol that indicate where the bacteria has spread. The orange bubbles that come up are DNA points you can snag for evolution. Eventually countries begin developing and spreading cures, which are indicated by the blue beaker bubbles that you need to destroy to keep your plague going.

Periodically tips pop up either to direct you in the game or to give news updates. The news headlines are sometimes silly, but eventually start expanding on how countries are dealing with your disease. Countries can either shut down borders and airports to prevent the continuous spread once the disease hits a certain danger level. 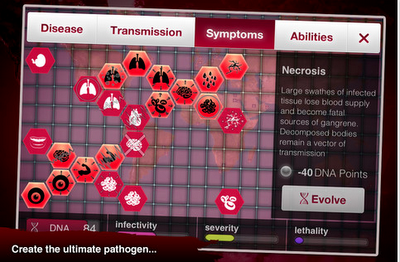 The game is free, but there are several opportunities for in-game purchases. You may also upgrade for $1.06, which I may actually do. The full game allows you to fast-forward and speed up your progress, and unlocks other plague customizations. Any other in-game purchases after that are up to you, but I’ll admit that they are a bit excessive.

Plague Inc. is extremely morbid but has that thrill of being all-powerful and in control. However, if you’re playing the free version, you’re liking going to get frustrated with attempting to unlock the pathogens above bacteria, like virus or fungus, unless you outright buy them. You may also get frustrated with how tenacious the countries developing cures tend to be.

If you enjoy strategy and omnipotent power, you’ll enjoy this infection simulation—I highly recommend it.  It’s available for Android and iOS and can be purchased at the Google Play Store or the App Store here.

Our Rating
8
You may be suffering from symptoms present in Plague Inc. and it just may be the beginnings of a pandemic--Beware!