With the recent revelations that the NSA has been spying on all the things, Google has taken steps to combat it.
by The Ian M

The tech monolith, Google, has encrypted its internal network in a thus far successful attempt to foil the NSA's data surveillance.

According to slides leaked by the Washington Post, the NSA and GCHQ joint program, known as MUSCULAR, tapped into the internal networks of Yahoo! and Google, intercepting traffic between data centers. The slides indicated that information captured by the taps regularly reached the daily intelligence briefings the NSA provided to President Barack Obama.

MUSCULAR was apparently the 15th largest source of intelligence information for those briefings, so this is quite the blow by Google.

The NSA was revealed to have "intimate" knowledge of how these internal networks work which may have been obtained either through an employee of the companies or through extensive reverse engineering. 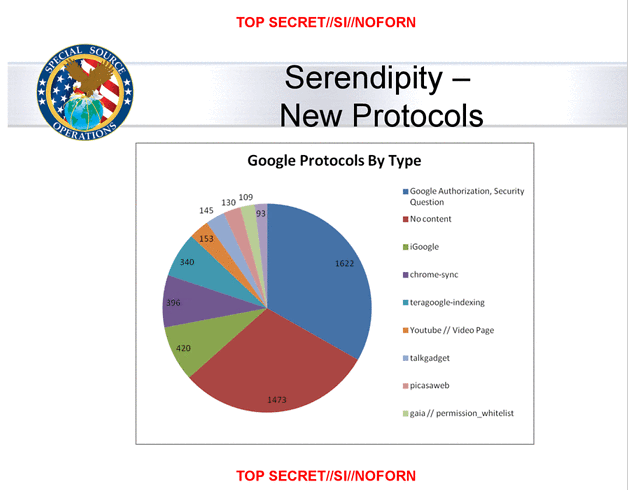 This slide shows the percentages of information that was captured from each Google service, ranging from YouTube pages to account security questions.

A set of NSA tools known as Serendipity enabled the NSA to track individual Google accounts as they accessed the following Google services:

On the Yahoo! side of this creepy surveillance coin, the NSA had access to entire user mailboxes, messenger protocol, and advertising tracker.

"I now join [Downey] in issuing a giant Fuck You to the people who made these slides," Hearn wrote. "I am not an American, I am a Brit, but it's no different—GCHQ turns out to be even worse than the NSA... The traffic shown in the slides is now all encrypted and the work the NSA/GCHQ staff did on understanding it, ruined."

Google has not revealed how it is encrypting its internal traffic, which is probably a smart move on their part. Yahoo! has not spoken on how, or if it plans to, deal with the intrusion but they hopefully will have a similar plan.

In the mean time, I wonder if the NSA has its fingers in gaming services like Steam, and Origin?