Dead Years Wants to Revive Creativity In a Decaying Genre

Zombie survival games and a canine companion sounds like a match made in heaven. For this Kickstarter game.
by Angelina Bonilla

Zombies have become a massive part of our culture, and nowhere is this clearer than in video games. With the repeating tropes of the genre as a whole, any breath of fresh air is more than welcome, which is why a game like Zerobyte Studios's Dead Years is a nice summer breeze in this clichéd zombie apocalypse game ridden wasteland.

What is Dead Years about?  According to the Dead Years Press Release,

“Dead Years takes place in an open-world environment where urban and natural landscapes raise as the omen of the disappearing human rule. In this captivating adventure, you are bound to explore and understand this new world, where a daunting race of enraged zombies, as well as a sneaky pack of hungry wild beasts, unite in their flaming desire to devour you. However, you are not completely alone! By your side, a faithful friend – your dog—will help you fight back, survive and adapt. Your relentless will to live, your wit, agility, strength, and even your creativity, are the only guarantee for you both to survive. The dog is more than just a part of the team; he has the ability to develop survival and combat strategies, learn new skills and provide useful information. You evolve as a team, but also have the skills to act independently or in group. Together, you move forward hoping to understand and adapt in the era of the undead.” 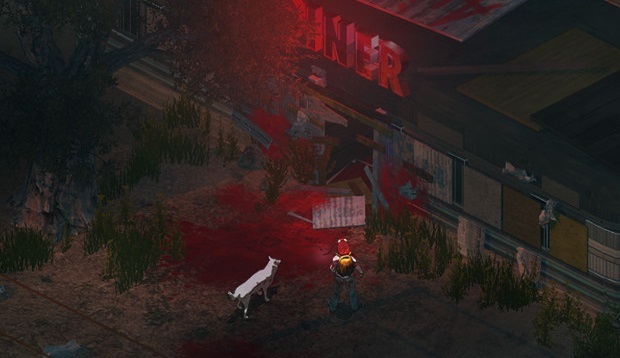 The game looks innovative and tries to separate itself from the rest of the zombie survival genre of games as much as possible with its crafting system, top down point of view, RPG traits, furry companion, as well as many other elements.

From what we see in the trailer, the game appears to be a haunting tale of the overall demise of human kind in a zombie apocalypse. The eerie thing about it is the fact that your character is completely alone with their dog and no one else to help.

The game looks like one where the player could become easily immersed in its world, even lost in, if you’re not careful.

It is worth noting that there is a fear in most gamers’ hearts about the dog’s seemingly inevitable demise, which is a common fear when it comes to modern zombie media.  While we don’t know how it will end, with what can be perceived so far, the game looks like it will make an impact—it is just a matter of the gaming community to determine how big of an impact it will make.

At the moment, the project has not been fully funded yet by their Kickstarter campaign, but it has a release date set for October 2014 on PC, Mac and Linux.

Update 4/26/2014: The Kickstarter has been temporarily closed until they can finish for the demo.