It was 1992. Bill Clinton was still smoking moist cigars and the country was on the rise after the end of The Gulf War. One evening, my 6 year old mind was shattered by my older male babysitter.

He asked me: "Do you want to see something cool"?

It was at that point he sat me down in a chair next to him as he played Wolfenstein 3D. Before I knew what was happening, I was watching in shock/horror/joy as animated Nazis and their guard dogs were getting blown away. I also got to be the unnamed protagonist and do my share of pixelated killing. I vaguely remember having nightmares of red squares of blood that wouldn't wash off my hands.

That night I was forever changed -- I learned I was a gamer. 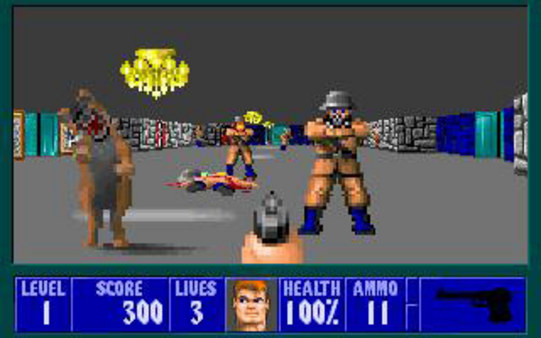 Video games have changed drastically in the last 24 years for the better. Stories are richer. Graphics are hyper-realistic and game physics are accelerating the quality of the the gaming experience. But while all of this is great for the industry, there is still part of me that wants that "moment of awe" again when I play a game for the first time. Unfortunately, that hasn't happened in a while.

For me, I prefer to go backwards and play retro games with a set of adult eyes. That's where emulators have helped supplement my gaming needs the last few years.

Emulators are programs that allow a personal computer or video game console to emulate another video game console. I use a few programs on my PC to play old Sega, NES and Arcade games. This has lead to many enjoyable hours reliving my childhood and finally beating games that had me rage quitting as a pre-teen before I knew how to curse (ex. Earthworm Jim).

Call me old fashioned, but there is just something special about playing Super Mario Kart for SNES or Mortal Kombat for SEGA with your friends while drinking cold beer that makes it more enjoyable... maybe it's the buzz.

So how can you get in on the emulator action?

If you want to break out your old issues of Nintendo Power and play some classics, you can get yourself an emulator at Zophar's Domain. For games, I go to Cool Rom and get specific titles. But there are other sites where games can be found.

Word of Warning: Due to the popularity of emulators, many have been impersonated by malware. Most of these malicious emulators are for video game consoles like the Xbox 360, Xbox One, Nintendo 3DS, etc. Generally such emulators make nearly impossible claims such as being able to run Xbox One and Xbox 360 games on one program. Just stay smart and you shouldn't have any issues.