In a Galaxy, Far Far Away: The Star Wars X-Wing Miniatures Game

Control your favorite Imperial and Rebel ships in a battle for the galaxy in the Star Wars: X-Wing Miniatures game.
by Amanda Wallace

Miniatures games can seem daunting at first. With the myriad of pieces, the precision of play, and the amount of money one can sink into them, they seem like a fringe market.

Fantasy Flight, one of the best board game developers right now, has made a game that transcends the title of miniatures. With simplified board-game like gameplay, a readily recognizable property, and high-quality pieces, it's sure to appeal to miniatures players as well as more casual gamers.

X-Wing is, at its heart, a 2-player game. One side plays the Rebels and the other side represents the Empire. Based on the incredibly popular Star Wars franchise, it's the second game of its type (the first being a Star Trek miniatures game) that Fantasy Flight has released.

The starter pack for X-Wing contains all the pieces you'll need to start a simple two player game - two TIE Fighters and one X-Wing. Play is balanced through a point system, so despite the fact the X-Wing is seemingly outgunned, it still has the capacity to win. You choose between a variety of pilots from the series, and everything you need to know about your character is printed on a disk below you miniature as well as a card.

The simplified gameplay is really where X-Wing shines. Your movement is dictated by a small spinner: 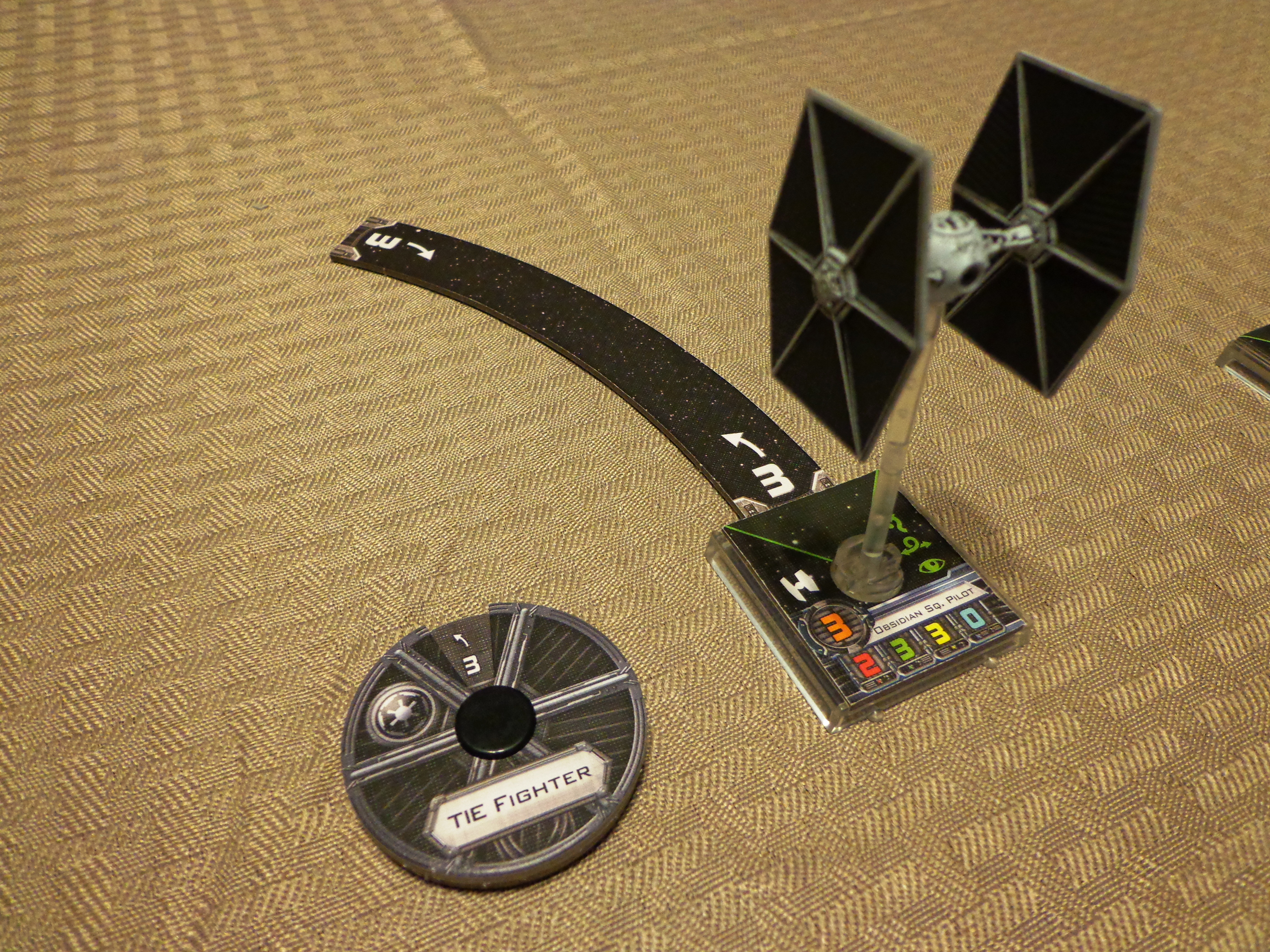 ... And sloping game pieces like the one in front of the TIE fighter. These game pieces are easy to understand and create a simple measurement system. I've seen hardcore gamers as well as people who never play successfully navigate X-Wing.

The quality of the pieces is really another perk for the X-Wing game. While the miniatures world certainly has higher quality figures, X-Wing's pieces are well made and lovely. The Millenium Falcon, one of the expansion pieces, has moving parts on it and the fine detail is fantastic for a miniatures amateur like myself. 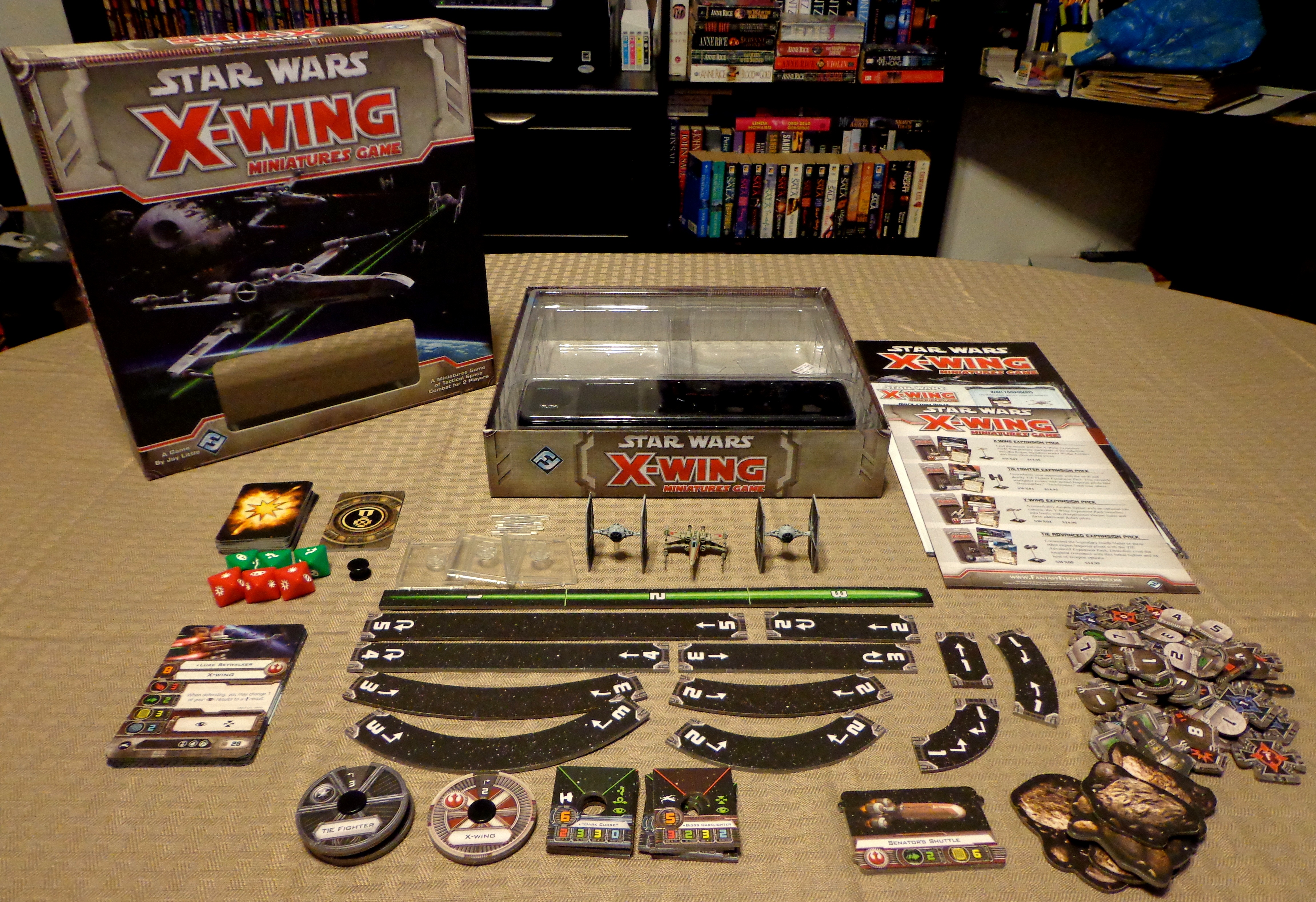 The downside of X-Wing is that it's a two-player game. While some people have scaled the game up for more players (and it certainly does scale well), to do so you will need another core set. Expansions are well done and include more of the recognizable ships like the Millenium Falcon and Slave One (Boba Fett's ship). These expansions are fairly reasonably priced, and allow you to spend as much or as little money as you desire. Also, it's hard to put the pieces back into the original box, and for my set, I had to purchase a tackle box to re-package it.

The game is quite fantastic, and if you're looking for a great game to add to your board game collection, I could not recommend it more. This game is easily playable by amateurs and enthusiasts alike.

You can buy the core set and other expansions from Amazon.

Our Rating
9
Control your favorite Imperial and Rebel ships in a battle for the galaxy in the Star Wars: X-Wing Miniatures game.