Kenji Eno's final game in the Laura trilogy is easily the weirdest yet.
by katlaborde

If you've read my article on D, you're likely expecting D2 to be follow-up to the events of the first game. However, D2 has nothing to do with the original except for Laura, starring in a different role of course, and umm...well maybe its too early to spoil the other similarity.

Originally, D2 was set to be a direct sequel to D. The planned sequel was set to debut on Panasonic's M2 console which was their successor to the 3DO. The M2 was cancelled shortly before its release by developer Matsushita who did not want to compete with Sony's PlayStation or Nintendo's N64 console. According to Eno, D2 was over 50% complete upon cancellation.

A short trailer was released for D2 featuring a pregnant Laura on an airplane, getting attacked by a supernatural force. During the attack, Laura's baby is taken from her womb and sent back in time. The game's protagonist would have, of course, been Laura's baby, conveniently aged to a teenage through SUPERNATURAL forces. However, after the cancellation, Eno decided to scrap the project entirely and develop a new version of D2 for Sega's Dreamcast. The trailer can be found below:

Although it would have been interesting to see Eno's original vision for D2, we were still treated to a weirdly entertaining journey through the Canadian wilderness. First though, I will be mentioning some of the more adult themes present in the game. So, better safe than sorry!

[Some of the content in this article is NSFW!]

Once again, as in the case with Enemy Zero, Eno draws a lot of inspiration from film. In this particular instance, its John Carpenter's The Thing, so knowing that, you can be assured there is a lot of snow and aliens in this game. As D2's story is somewhat convoluted, I'm going to give an overall general plot synopsis instead of an entire overview as I did with the first two games. And to think he got TSA pre-check.

Similar to the original story for D2, the game opens with Laura on an airplane except no kid this time.  She is having a conversation with a fellow passenger named David, albeit an incredibly one-sided conversation as Laura does not speak throughout the game. Suddenly, another passenger, a creepy old guy wearing dark robes starts chanting "Shadow the Final Destroyer". Maybe it's just an odd reaction to having to endure a toddler kicking the back of his seat for the last hour. Or maybe its' evil....

It's evil. As if the plane ride couldn't get any worse, a group of terrorists attempt to seize control of the flight. Thankfully, David is a FBI agent and manages to take some of them down. Despite his attempts, a meteorite strikes the plane, sending it crashing down into the snowy fields of Canada. Great.

Laura, surviving the flight, awakens in a small shack with Kimberly Fox, another survivor of the flight. Kim tells Laura that she has been taking care of her for two days even though the accident was ten days ago. Of course, Laura can't remember what happened during those first eight days. Their conversation is interrupted when a former survivor now turned tentacle monster breaks into the shack. 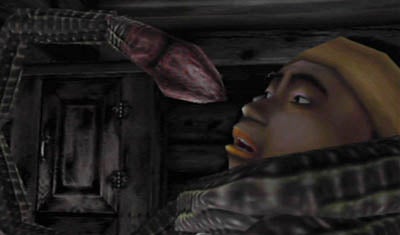 I don't remember this ever happening to Kurt Russell...

Kimberly is attacked by the monster in that so disturbingly weird fetish sort of Eno way. I'm sure you can tell by the picture what happens to poor Kim. Parker, another crash survivor, enters and manages to drive the monster away, but instead Kim just treats him with overwhelming hostility. You save someone from a monster face violation and that's the thanks you get.

The rest of the game has Laura exploring the wilderness to search for help as she encounters a whole lot more weirdness on the way. There are a ton of cutscenes in D2 which is a bit unusual since the other games in the series were pretty light on the story. Instead of being subtle, letting the player figure out the story as they go along, Eno goes full Kojima filling the game with long cutscenes packed with exposition.

Interestingly enough, even with all that exposition, the game will drop certain story elements. For instance, there are countless cutscenes with Kimberly yammering on and on about some drug called "Linda" of which she happens to have an addiction. Although, Laura does inevitably destroy the plant used to make the drug, that's all that really comes of it. You never really find out what Linda is or why it's so prominent in the story. The side plot just kind of fades into nothingness.

Also, another issue I had with the story is Laura's inability to talk. I know Eno has kept her tight-lipped for the other games, but with so much story in D2, its awkward watching one character carry an entire scene while Laura just makes gestures. This is especially aggravating with the character of Kimberly as her character is incredibly irritating.

The gameplay of D2 is drastically different than the other entries in the series. Gone are the FMV clue searching and Doom-esque first-person shooter sequences, instead D2 plays more like a RPG. 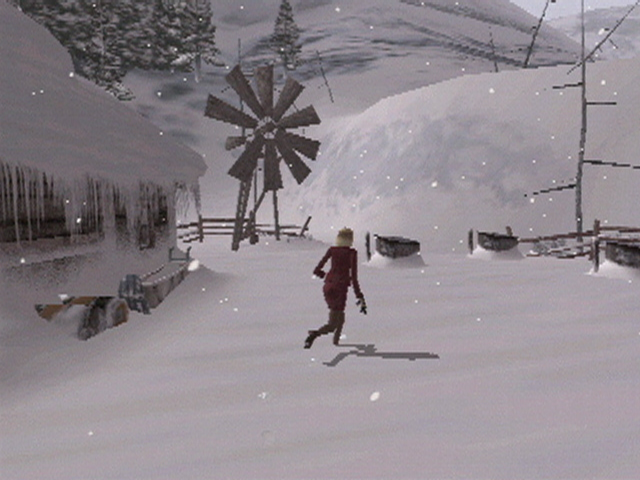 You spend A LOT of time in the snow.

Each section of the game features several large areas for Laura to explore. During exploration, the player can control Laura in a third-person perspective. When a random battle occurs à la Final Fantasy, the game enters a first-person perspective where only Laura's gun can be aimed at the enemy. During these sequences, Laura must defeat the enemies, using a variety of different weapons, and consume meats when her health is low. Depending on the difficulty and number of enemies defeated during battle, Laura will gain experience points which can be used to increase her health.

In order to keep Laura alive, the player must make sure to have an ample supply of meats. Meats, yes its' meats not meat, is gained through hunting. During exploration, Laura can equip her hunting rifle to shoot various animals for sustenance. Other than gaining experience through battles, this is the only other gameplay aspect that can be done during exploration. Therefore, without the addition of side quests or even collectibles, the majority of the environment is dead and completely unworthy of exploration.

Finally, Laura is also given a camera for the player to take pictures during gameplay. Additionally, the photos can be viewed via the Dreamcast VMU if so desired.

Although D2 does have flaws, it was pretty impressive in terms of graphics and story when it was released in 2000. For the most part, I enjoyed the bizarre tale weaved by Eno despite being too reminiscent of The Thing at times.

D2 is actually one of the very few games I have played that I actually found unnerving. The game has a lot of disturbing moments. For example, boss encounters are usually humans turned into tentacle alien creatures, only retaining odd fragmented thoughts of their former self. Its kind of unnerving to hear a child's grandfather call out for their grandchild as Laura sprays their deformed body with machine gun bullets. Yes it's weird, but there is something generally disturbing about it all.

If you can't play D2, watch a playthrough of it. I recommend supergreatfriend's awesome LP. It is definitely a bizarre experience, one in which you will likely never forget.