The Artizens Combat Playtest is Underway

Kickstarter indie hit Artizens is making way towards release with a playable pre-alpha build of the game.
by vegna871

Kickstarter has funded some fabulous looking games, but few have been as great looking and as ambitious as Artizens. The dev team at Artizens Inc. have been hard at work trying to get the game in the hands of the people. Just a few days ago they released a combat playtest, which I've put a little time into and had some great fun with.

A while back I wrote a piece on what Artizens is, which you can read here. A simple explanation is that it's a 2-D monster hunting game with a lot of customization. You are in control of a character with a series of weapons that gets to fight big, powerful monsters for a living. It's not a new genre, but it hasn't been done in 2-D before to my recollection. The biggest innovation of the game it that it will allow you to draw your own character and equipment, allowing for near limitless character customization.  You will be able to make your character look like whatever you want, and then add any of a large series of modifications to your gear to make your abilities fit your style.

How the playtest runs

The playtest is about the simplest possible version of the game.  It is mainly there so the team can test how their servers work with multiple people playing on them, though it does give a very small taste of what combat is like. There are 7 servers to play on, 6 of which support up to 4 players.  There is also one larger server that can house up to 20 people. One of the four man servers is the Dev server, where the developers will occasionally play to see how the game works for themselves and test player feedback.

Essentially, the playtest currently has you playing as a sword and shield wielding blank slate character, affectionately named Reggie. You fight against the Trittentrat, the odd scorpion-like monster pictured further up in the article. The area available is a forest area, with a small amount of platforming available throughout six or seven side-scrolling screens. Character customization is largely unavailable unless you know how to mess with the game's art assets, but the playtest isn't focused on this aspect of the game, which is something the actual alpha should remedy.

The combat feels nice, despite the current limitation to one type of weapon. You can block with the shield, but many of the monster's attacks are unblockable, and the ones that are blockable still deal chip damage. The sword has a single three hit combo that you aim with the mouse, allowing you to pinpoint where you want your attack to hit. The closer you focus towards the monster's center of mass, the more parts of the monster you hit and the more damage you deal. It's also extremely challenging, Trittentrat has little trouble killing you in two or three hits.

And there are a few small bugs

As with any early build of a game, there are a few bugs that need to be worked out. The music will occasionally cut out, which can usually be fixed by going to a different screen and coming back. The biggest bug is that dealing a killing blow to Trittentrat while he is jumping glitches him out and keeps him from dying or being hit, which basically ruins play on that server until the devs reset it. There is also the matter of Trittentrat being completely unable to hit you when you stand on his back. This may have been intended as a feature, but it makes the fight with him incredibly easy. A weak attack that can still hit you while you are on his back would allow this to stay a feature without it being a free pass to a win. 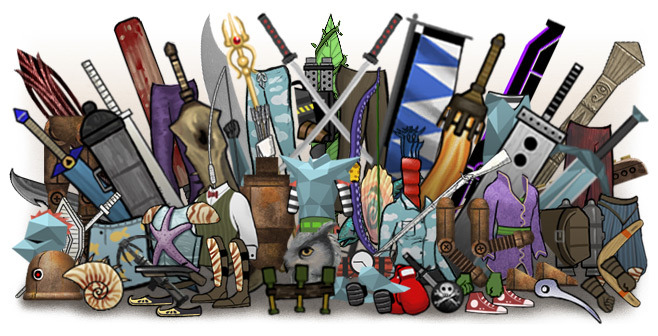 Despite the bugs and the limitations, the playtest is really fun for a pre-alpha build of the game.  It has me really hopeful with what we'll have when we get a more compete build of the game with more weapons and customization options. The customization is where the heart of the game is going to come in, but all in all it seems to have some pretty good gameplay to back it up. The combat is great, although the shield needs a serious buff, and the design and style are wonderful. All in all, I'm really excited to see where the game goes from here.