Square Enix shows off new trailer and box are for World of Final Fantasy at PAX West 2016.
by Glitchieetv

World of Final Fantasy debuted at PAX West 2016 with a new trailer. Featuring characters such as Squall, Tidus and Cloud, the chibi styled game is set to release October 25, 2016 on PlayStation 4 and PlayStation Vita. The new trailer shows off a brand new cut scene showing how Enna Kros guided twins Reynn and Lann to Grymoire. Along with the new trailer, the game's box art was revealed.

The game revolves around the siblings as they journey through the world of Grymoire, tame and ride various beasts and battle against monsters, while encountering other Final Fantasy series characters like Lightning and Aries -- the game is seeping with lore. Players start in the town of Cornelia, which is from Final Fantasy 1. Leaked images also show that Snow Villiers, from the Final Fantasy 13 series, is set to join the cast of World of Final Fantasy. 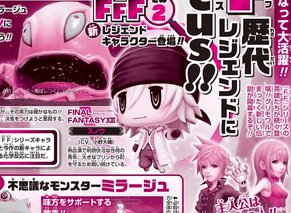 What do you think of the Final Fantasy spin-off?