Crisis Core is an amazing game that is sadly confined to the PSP.
by Dalton White I

Final Fantasy VII is one of the most well-recieved and beloved video games for many gamers; however, Crisis Core: Final Fantasy VII takes place before FF VII and sets the stage of Midgar in a dramatic and amazing way.

Crisis Core is a prequel to FF VII and follows the story of Zack Fair, an aspiring member of SOLDIER. Crisis Core follows Zack as he rises through the ranks of SOLDIER, as his dream is to become the highest rank: First Class. The game features a bunch of new characters such as Angeal, Zack’s teacher, and the heart throb of Midgar: Genesis. Naturally there is plenty of fanservice as Zack meets multiple characters from FF VII like Aerith, Sephiroth and a few others. Aerith in particular has a very special connection to Zack, and her portrayal in Crisis Core is probably the best characterization of Aerith I have ever experienced. The story has its share of colorful characters and plot twists that both fans of FF VII and people new to the series can enjoy.

As a PSP game, Crisis Core pushes the system to the limit with its cutscenes and graphics. Zack travels all over Gaia over the course of Crisis Core and each location has its own style and types of enemies. The cutscenes are gorgeous, something that could easily be replicated and still be impressive on consoles. 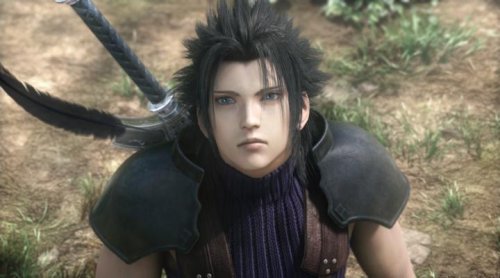 The music of Crisis Core features some amazing tunes that really pump you up as you fight, in both boss encounters and random battles. Naturally there are multiple re-makes of classic FF VII themes that fit with the theme of Crisis Core, but also keep their original nostalgic essences.

Crisis Core’s battle system is action-based, quick-paced and simple enough to appeal to experienced and new gamers. It also features a Slot-system called the DMW that allows Zack to perform special moves that can come in handy in random and boss battles. As Zack meets new characters he gains different special attacks, some that offer support and boost his stats while others can deal some epic attacks.

Crisis Core also follows the lore of FF VII with Zack obtaining material for different magic spells, physical attacks and stat boosts. This gives players the freedom to use any style they prefer. One of the most cinematic and spectacular parts of Crisis Core’s gameplay is the summons, as it would not be much of a Final Fantasy game without them. The Summons in Crisis Core are visual marvels that are as strong and powerful as they are gorgeous to watch.

Over the course of the story, Zack has multiple SHINRA missions to complete. These missions can unlock rare materia and even unlock special hidden super attacks. This game goes the extra mile for unique style and replayability.

Crisis Core is an amazing addition, as both a prequel to FF VII and as a FF game in general. It is a shame that it is exclusive to the classic PSP. With the upcoming remake of FF VII and with the fact that Square has already ported another of my favorite PSP games to consoles, Kingdom Hearts: Birth By Sleep, it would be a great idea to remake this game for the PS4.

Anyone agree or disagree with the idea? Leave a comment and tell me what you think.