The last bit of the Nintendo Switch's 3rd party support offers 2 enjoyable RE outings, though not without their quarks.
by Joseph Ocasio

In January, Resident Evil 7 kicked the year off strong and brought the series back to its roots with a hardcore survival horror experience that ended up being one the best games of the year. Now, Nintendo Switch owners get to enjoy the complete side story of Revelations with Resident Evil Revelations 1 & 2, two titles praised for bringing the series back to basics after the polarizing Resident Evil 6. It's fitting the latest version of these 2 games makes its home on Nintendo's latest console, as the original Revelations started life on Nintendo's other handheld system, the 3DS, back in 2012. It also marks Revelations 2's debut on a Nintendo system, since Capcom decided to not port it to the Wii U. The end results are two solid ports of games that manage to find a perfect balance between old school RE goodness and the newer action focus.

Taking place between the events of Resident Evil 4 and 6, Revelations 1 & 2 has you playing as several different characters from the franchise. Revelations 1 has you primarily taking control of Jill Valentine as she and her new partner Parker Luciani are in search of Chris Redfield, who was last seen on an abandoned ship, the Queen Zenobia. Along the way, you'll have to deal with a new group of bio-terrorists who are out for world domination, and, of course, it's up to the soldiers of the BSAA to put a stop to them.

Revelations 2, meanwhile, has you playing as Clair Redfield (Chris's sister) as she and her young friend, Moira Burton, are kidnapped and forced to survive numerous Saw-inspired traps and trails on a deserted Island, while Moira's Dad, Barry Burton, tries to find them and simultaneously take care of the young girl he finds.

Both stories follow similar plot-lines and themes from past games, such as evil corporations attempting to use bio-tech for world domination and isolating protagonists from the outside world to add tension, but there's just enough new here that it doesn't feel like a complete retread. Both games seem to be aware of the convoluted timeline of the Resident Evil franchise and even have with it, with many corny one-liners and tongue-and-cheek dialogue. Despite a few references here and there, you can go into both games without playing past installments, though series fans will enjoy the various throwbacks  to past games. Just don't go in expecting the same kind of intensity as RE7. 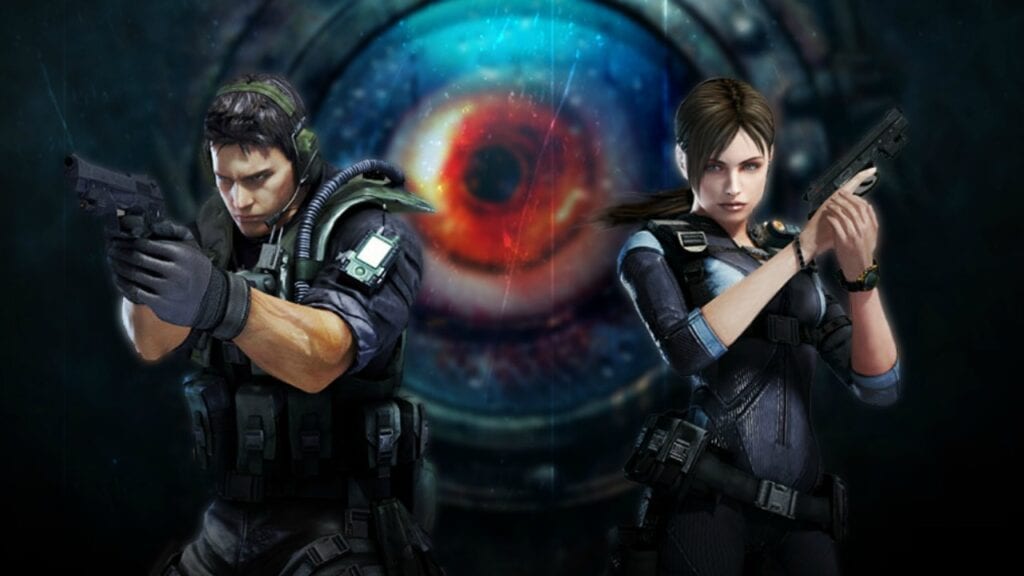 Both Revelations titles follow a familiar structure to previous games. The big difference it that each game separates the dozen or so areas you visit into acts and episodes. Each has you exploring and trying to survive various areas to get to the exit and find the next one. Both games are linear affairs, but you'll do a good amount of backtracking through each area to look for keys and other items. Along the way, you'll be upgrading your weapons and solving simple puzzles to break up the action as well. Neither title is mold-breaking, but the formula is utilized well, so doesn't need much changing here.

Each game can be completed in about 6-8 hours, but there's a fair amount of replay value for each. From unlocking additional guns, costumes, and higher difficulty settings, each game has a decent amount reasons to got back and give them another shot. Along with the main campaigns, you'll get access to a fun, if basic, raid mode that you can play online that also unlocks new features for each of the campaigns. Both games also support coach co-op, though you still can't play either story mode online. One new feature exclusive to the Switch versions is motion controls. They're not quite on the same level as RE 4 on the Wii, but they're competent alternative control schemes, should you choose to play with them. The other new addition is Amiibo support that allows you to obtain various upgrades more quickly or gives you more points you can use to upgrade your skills. But that's about it. Don't worry about which Amiibo, as you can use any of them. The lack of any additional and meaningful features is a bit disappointing, and you'll probably find less of a reason to re-visit these games, if you've already completed them on other platforms.

Both Revelations games control as well as any other competent third-person action game that's been released over the past 10 years. Aiming is mostly solid, and the controls work well across both games. Ammo can be sparse at times, though more so in the sequel, so you'll have to use it wisely. But enemies don't make that easy. With their constant movements, it makes it difficult to get a good lock on them and makes those life saving head shots much harder. Despite this, enemy encounters never feel unfair, so the game is balanced well.

Revelations 1 introduces a scanner that allows you to search the environments for ammo and other items, as well as analyze enemies so they can be dispatched easier. That being said, it's far too easy to over-abuse the system and you'll be finding ammo and health at such frequent rate that the sense of tension and dread that the series is known for is practically non-existent. This puts the original Revelations a bit on the easy side, but it still holds up as a fun action game.

The only thing that that doesn't hold up is the awful dodge mechanic. You press up, just as an enemy is attacking, but the window to do so is so small that it's almost useless to pull off. It's awkward, to say the least, and feels more like an annoyance that anything else. Revelations 2 is a bit more of what you expect from Resident Evil. The game is more scarce with its items, creating a more intense and challenging experience than with its predecessor. Enemies are most re-used throughout, though. From zombie dogs to the standard enemies you'll fight often, they all just come off as generic. Yet the encounters you have are still just as entertaining and tense, thanks to smart combat design, especially in the boss battles. These fights are, in general, much more creative and interesting, involving interesting creatures as well, like what you'd expect from past games. The inclusion of an ally (Moira) that has her own ability is a much better function than just using a scanner as well. Changing between characters adds another layer of strategy and tension to the mix, as you'll have to switch your tactics on the dime or suffer the consequences. Also, the dodge mechanic actually works!

While the graphics won't blow you away, both Revelations games hold up strong in the art department. The ship from the first game might grow a bit repetitive, but it does a nice job of keeping itself distinct from areas within the RE canon. The best survival horror games make the worlds you visit act as characters in themselves, and the Queen Zenobia does just that, as does the island in Revelations 2. 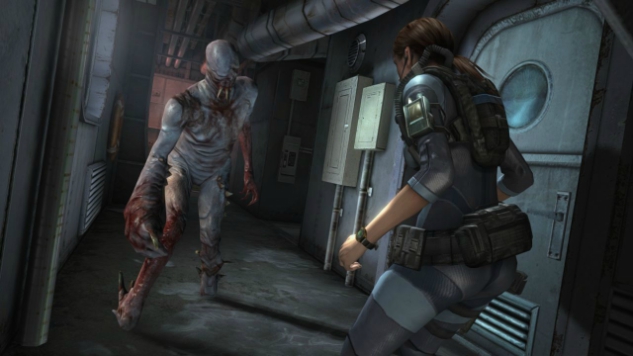 In terms of performance, both run at 1080p docked and 720p in handheld. However, only Revelations 1 runs at 60FPS, where as the sequel now runs at an unlocked frame-rate. It's understandable, given that it's more technically demanding, but it would of been nice to cap it to 30, when jumping form game to game. There were some frame-rate slow downs in the second installment that weren't there in other versions, and you'll need to be prepared to face load times as long as a minute when loading up a level in Revelations 2. It's not too frequent, but it's definitely noticeable. While the music isn't anything to write home about, the sound effects pack a punch, and the voice acting matches the overall atmosphere and setting.

If you've already played both games, there isn't much here to recommend. Though they work a bit better for portable play, you wouldn't be missing much if you just bought both games for $20 at the bargain bin at any store. That being said, if you never played them, they're worth checking out. This sub-series of Resident Evil may not be perfect, but it still manages to do a good job in combining the old style of play with the new.

Our Rating
8
The last bit of the Nintendo Switch's 3rd party support offers 2 enjoyable RE outings, though not without their quarks.
Reviewed On: Nintendo Switch
What Our Ratings Mean