TT Games are rumored to be developing a game inspired by Minecraft.
by Ford James

Rumors have started circulating about a licensed Lego video game titled Lego Worlds, which is supposedly in development by TT Games and Warner Bros..

The rumor started over on the Eurobricks forum with one user, mikaelsol, posting the picture below asking ‘What is Lego Worlds?’ and that he found the image on the back of the instruction manual for set 60097, which is a traditional city square. 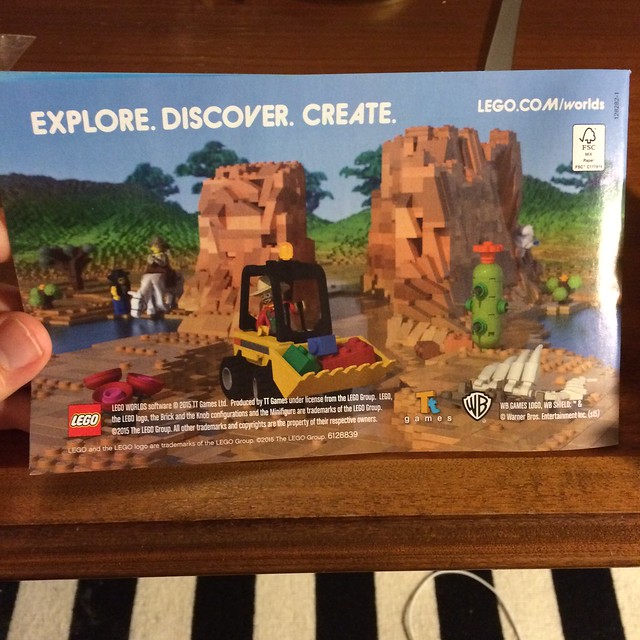 As you can see, there is no indication as to the release date of Lego Worlds nor is there anything saying which platform it’ll be available on. There is still no official word from TT Games, Warner Bros., or Lego about the game and the link featured in the image (http://lego.com/worlds) throws up a ‘Page Not Found’ error when we visited.

The promotional image also features the tagline "Explore. Discover. Create." These words happen embody the three core fundamentals of Minecraft. It looks like it’s starting to come full circle as Minecraft was heavily influenced by Lego bricks, which are now taking inspiration from Minecraft!

There’s no doubt Lego Worlds will sell though, as the Lego name has been milked across multiple licenses and franchises such as Star Wars, Marvel, Harry Potter and Lord of the Rings to name a few. They’re not slowing down either, with Lego Jurassic World confirmed to be in development by TT Games, the same supposed company behind Lego Worlds.

Warner Bros. also recently announced Lego Dimensions, the latest in the recent trend of ‘toys-to-life’ video games, similar to Disney Infinity and Skylanders. Lego games combined have sold over 100 million units so far, so keep your eyes peeled for more news on Lego Worlds as it surfaces.