Jonathan Blow's critically acclaimed platformer takes Super Mario Bros' format and flips it on its head, spins it around, then flips it right-side up again and swears it was all just a bad dream. Much like Super Meat Boy, the Mario/princess paradigm in Braid is made evident immediately upon entering the first world. 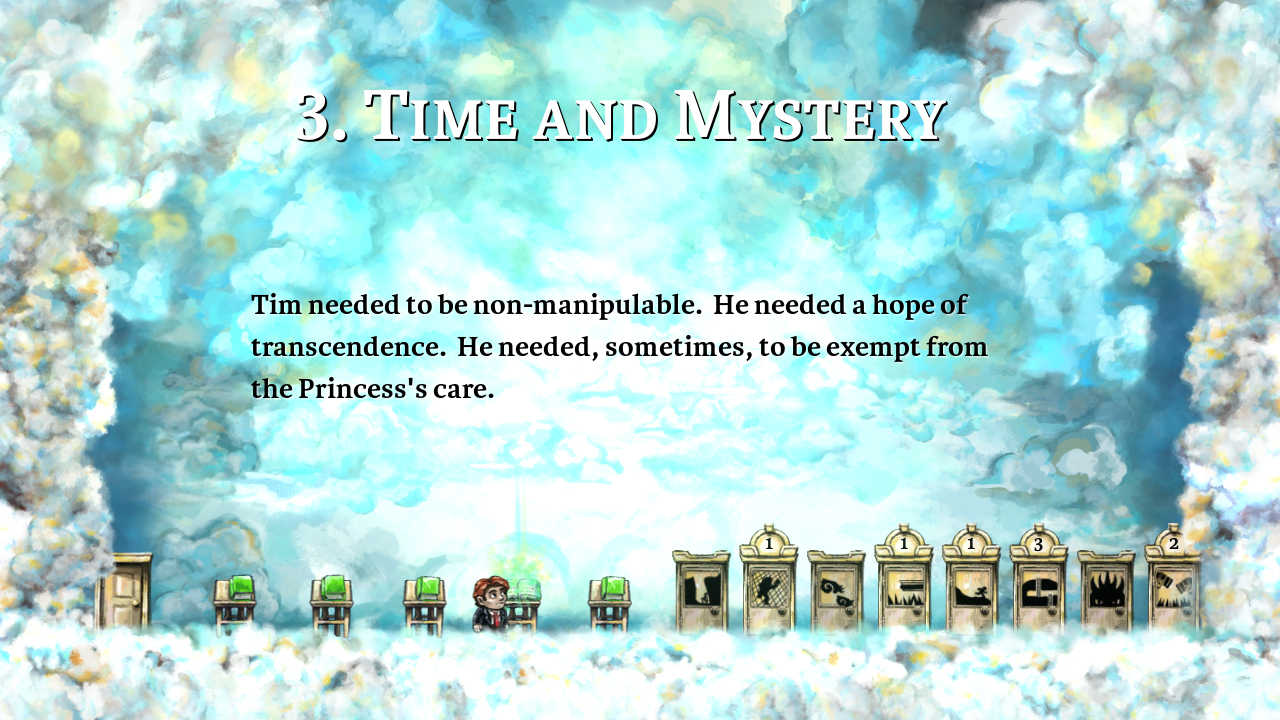 However, as the player progresses through the game, the ambiguity of Tim's quest becomes increasingly peculiar and even disturbing. The first oddity lies in the missing World 1; the first world available to the player is labeled World 2, giving us reason to believe that we are being told Tim's story out of order. This is the first flaw in the game's narrative -- a flaw intentionally created by a manipulated perspective.

The second oddity is presented by Toad's apparent replacement. With each level's end, Tim is greeted by a dinosaur who tells him that the princess is in another castle. However, this message is delivered with increasing confusion. By the final available level, the dinosaur admits that he has never actually met the princess and even asks Tim if he's certain of her reality. This solidifies any speculative doubts the player might have developed for Tim's perspective. The game started with a very concrete fact: the princess had been snatched by a horrible and evil monster. Now, Tim's credibility has been nearly obliterated. That is, until we enter the last level of World 1. 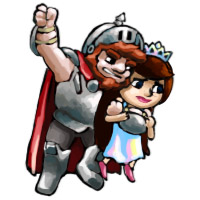 Here, we finally are given a second perspective on our story, courtesy of none other than the princess. Upon entering the final level (prior to the epilogue), we see a burly knight climbing down a rope, clutching the princess. As they fall, the princess seems to escape the knight's clutches and calls for help as the knight beckons her back down, growling like the horrible, evil beast he is. Tim and the princess then run away from an impending doom, the princess throwing switches to aid Tim as they flee. Finally, they both are about to reach each other when--everything stops. The game hints at reversing time. As the player does so, we see the events of moments ago transpire in retrograde.

Only now it tells a very different story. The switches thrown by the princess seem to be used against Tim, keeping him away. Dropped chandeliers, closing barricades--all seem to now be working against our hero. Finally, the princess reaches the knight, still beckoning her to come down. Obedient to the retrogression, the princess obliges the knight, and together the two climb away from the evil Tim, both looking far happier than we remember. This, of course, is the princess's side of the story.

Is the knight the monster? Is Tim? Is the princess even real? Does the entire game serve as a symbolic reminder of the Manhattan Project? Gamers and critics are still pondering the meaning of this game today and will most likely continue to do so for a very long time. But for all the ambiguity and mystery surrounding this game, there is one certainty: no doubt, Braid will stand as a great allegorical milestone in gaming history.