1 of 9
Next
by Marc Anthony

Aftr a long way, the Nintendo Switch has finally been revealed during the Nintendo Switch Presentation -- with a confirmed release date of March 3, 2017. Along with the announcement of its technology, specs, and features, Nintendo has also announced some upcoming titles to the new console in the future.

This list just scratches the surface of the 80 games currently in development, according to Nintendo conference.

Revving up this list is the announcement of the new Mario Kart 8 Deluxe. The deluxe version of Mario Kart 8 will still feature all tracks and characters from its Wii U predecessor, but will add DLC tracks and characters as well -- such as King Boo, Inkling Boy and Girl, Dry Bones, and Bowser Jr. There are also new tracks including Urchin Underpass and the new battle stadium for balloon battle and Bob-Omb blast.

The game will feature a new item mechanic that allows players to hold to items at once and sees the return of the feather and boo items. In addition to the item mechanic, there is also a smart steering feature that will allow easy control for new players.

(Luigi can't wait that long for it.)

Splatoon 2 has been announced to hit the Switch as the sequel to (you guessed it) Splatoon. The sequel is expected to be available this summer, packed with new weapons, fashion options, new arenas and more.

The Splatoon Stage presentation also introduced the "Splat Duelies" and the super jump mechanic. These duel wielded weapons not only can shoot ink from each hand, but also propel you at a high rate of speed to outmaneuver opponents. The super jump allows you to instantaneously jump to a teammate after viewing the map and pressing the button assigned to that specific member.

The game can be played on the Joycon and Switch Pro controllers, with gyro aiming controls for play in addition to online and local multiplayer capabilities. Splatoon 2 can be played on a television screen as well as the Switch's handheld mode.

Splatoon 2 plans to continue continue the in-game events player got in the first game.

A new title has emerged from the presentation with Nintendo Switch's ARMS.

DISCLAIMER  *Nintendo Switch does not have arms or is packaged with arms. I promise.*

ARMS is a play on boxing games with an obvious and significant twist -- elongated arms when fighting. Using targeting functions and allowing punches to hit an opponent, ARMS allows motion controls with the Joycon in both hands, where each controller acts independently of the other to create physical movement in the game.

ARMS has been announced with a projected release this Spring. It will be playable on split screen, online multiplayer, and Switch vs. Switch.

Everyone's favorite Blue hedgehog, Sonic, has returned to his roots with the new Sonic Mania.

Sonic Mania brings Sonic the Hedgehog back to his 2D pixelated adventure with new zones and classic stages, along with his two friends and playable characters Tails "Miles" Prowler and Knuckles the Echidna. Sonic Mania also features a new drop dash feature in Sonic's new game celebrating his past roots.

Sonic Mania is expected to release in the Spring.

Not much can be said concerning the upcoming RPG Xenoblade Chronicles 2, except that it follows an all-new hero in a new world on a quest for Elysium.

The past Xenoblade Chronicles was an open world sandbox RPG, split into specific areas for exploration along with missions and side quests with a real-time battling system -- one that's hopefully making a return to its sequel in a more advanced format with updated battle systems, and new characters to learn about and develop.

Check out the trailer above to get a better look at the sequel, set to release this year.

Mario returns to an open world sandbox much like Super Mario 64 and Super Mario Sunshine, traveling to several new worlds populated by forest life, desert lions, and the most obscene of all...people!

Introducing a personified hat mechanic into the game, Mario can now throw his hat or climb on it in order to overcome obstacles. But this the feature is only available on Switch according to Koizumi. 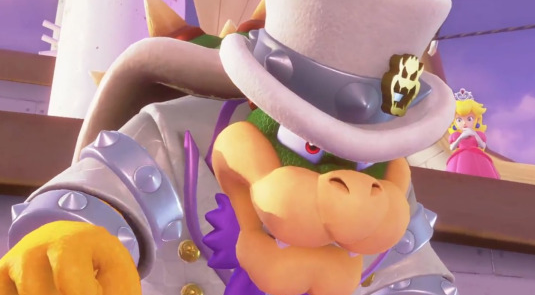 Be ready to break up the most awkward wedding of all between Bowser and Princess Peach when Super Mario Odyssey releases this holiday of 2017.

The Legend of Zelda: Breath of the Wild

The Legend of Zelda: Breath of the Wild has been announced for the Nintendo Switch. The trailer speaks for itself as fans await its arrival.

This is Nintendo's 18th installment of The Legend of Zelda franchise, following Link once more in his adventures across the ruined kingdom of Hyrule. Link will travel across the land and discover new destinations, lands, and shrines while fighting enemies, hunting game, and gathering for ingredients to sustain himself on his adventures.

In this installment, Link will also need the assistance of particular gear, outfits, and weapons that allow specific perks, skills, and special effects dependent on the task at hand. For example, specific outfits can make Link more stealthy and quick. And he'll have to wear different clothes dependent on weather; bundling up for cold weather areas as opposed to clothes better suited for the desert.

All weapons, food, and clothing must be obtained through playing the game by crafting and discovering these specific items while strategizing against new enemies with unique design and attack patterns.

In addition the game will allow amiibo support for several Legend of Zelda pieces, such as Wolf Link from Twilight Princess.

The incredibly beautiful sandbox world is being released on March 3, 2017 alongside the Nintendo Switch.

The Nintendo Switch Presentation 2017 saw the announcement of the Switch and its upcoming and developing games that will be released in the future. The presentation is shown in full to incite opinion and conversation.

Other confirmed releases to be released on the Switch so far include:

Which games are you most excited for? Any you're disappointed not to see in this list? Let me know down in the comments!