Have real-life wizarding duels with Maguss Wand. Donate to the Kickstarter today!
by Andrea Koenig

It may be too late for some of us to receive our acceptance letter to Hogwarts but that doesn't mean we're Muggles, does it? Joystiq and Engadget have teamed up to combine smart phones, engineering, and plastic wands to enable Harry Potter fans to hold real-life wizard duels with their friends. Magic and dueling will soon be available with Maguss.

While there is no official release date just yet, fellow Potterheads can donate to the official Kickstarter to get the development going with their $66,191 goal. There will also be additional locked monetary stretch goals to improve the device and program.

It sounds great, looks great, but down to the core of the wand, what's it about? Well, according to the development team behind Maguss: "Prepare to be spellbound!" 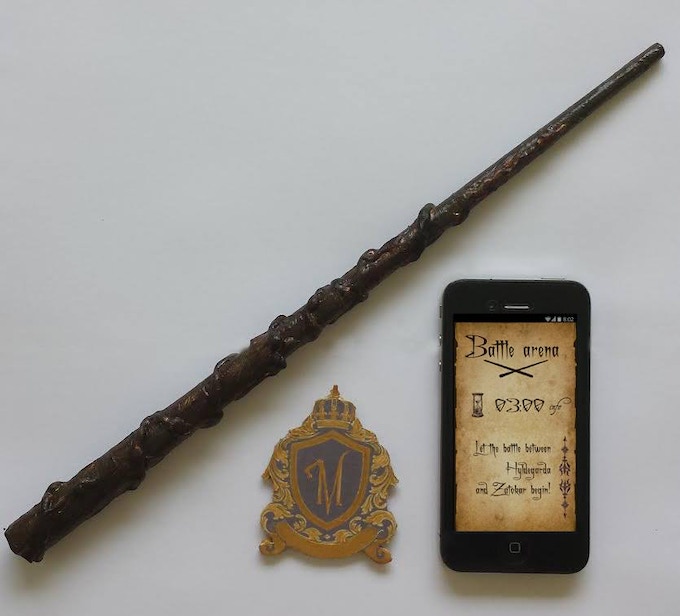 Every package comes with three things: your wand, your receiver, and the app. The wand uses an IR LED and motion sensor to know when the wand is being used and pass on the spell to the receiver. The receiver is a coat of arms you attach to yourself and it helps pass the signal to your app. Finally, the app consists of a "Battle Mode" to either challenge someone to a duel or be notified when someone has challenged you. There are sound effects and also a section for spells and spell tracking.

The standard package comes with these three things, Maguss website access, and a small package of spells, but more spells can be obtained via leveling up or joining "factions" of the game.

A Luxury (Premium) package that includes everything in the standard package. In addition, it also lets you reserve a specific character name, and receive a special VIP access badge that displays on the website and app.

There are also plans for Bulk Package discounts and personalized packages.

Regardless of package or game mode, players will be part of a rank system. The outcome of battles reward you with points based on your level. At Level 10 you can join factions. Level names change by increment up until level 41 at Grand Wizard.

The game is based on a war between factions. When players reach Level 10, they will be able to choose to join either side. Each side has special powers and an exclusive community.

At the moment, there are only plans for two game modes: Practice and Simple. Practice just requires you to not wear your receiver and stand a distance away from it to attack it. Simple, allows face-to-face or online battles that must be accepted before the duel can begin. The Simple Game Mode will be especially useful for clubs or friends who are LARP players

With a $120,000 stretch goal, players will receive a Complex Game Mode. Players will control the four basic elements, battle each other, level up, and amping up specific spell attributes to personalize their power.

Additional stretch goals bring in special features, like a professional graphic designer to redesign the app, a more complex rank system, and lastly the feature to activate GPS tracking with an interactive map so you can meet up and duel wizards in your area.

This project is being developed and managed from Denmark by Founder Ondrej Tokarr and his team. According to their schedule, there's still time to pledge, but the donation period ends on September 13 with plans to develop and ship out Maguss packages in the month to come after that.

So before time runs out, make a pledge to the Kickstarter. No time-turners necessary.