Dogmeat, your companion in Fallout 4, has been confirmed to be unable to die.
by Ford James

Ever since the Fallout 4 trailer was released to the public just over a week ago, there's been speculation about whether the dog, who has now been confirmed a companion, can die or not. We tend to get strangely attached to dogs in video games; killing other humans and monsters is a fact of life for gamers now but when it comes to dogs, we simply can't take it.

Todd Howard, the Executive Producer at Bethesda, has come out and confirmed that Dogmeat cannot die. Huge news for us dog lovers, however some clarification is still needed. Is he completely invincible or could he still die in a cutscene/scripted event? Jim Sterling put it quite well, vocalizing what could be the very thoughts of Todd Howard, aka Satan himself, if this is true. 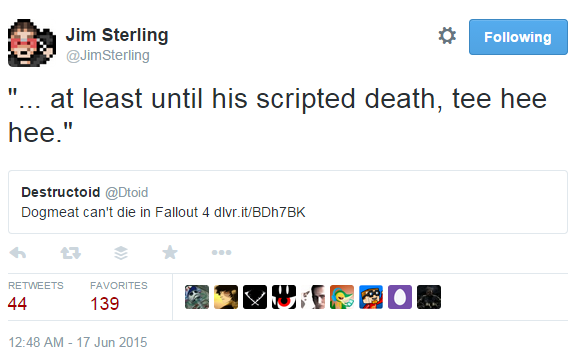 There's also not been any confirmation yet on whether Dogmeat is the German Shepherd's fixed name or if we'll be able to change it ourselves. The latter is likely true due to the dog simply being called 'Dog' early on in the trailer, however we're yet to hear for certain.

Fallout 4 releases on November 10th for PC, PS4 and Xbox One.