Halloween costumes don't have to be limited to the real world this year. The Fatal Frame franchise is turning its efforts away from the risqué alternative character costumes of the past. Players can now unlock Princess Zelda and Zero Suit Samus attire as a bonus to their horror experience in Fatal Frame: Maiden of Black Water.

Nintendo released a short gameplay video with each of the girls moving around in their alternative costumes, as seen above. Miu Hinasaki struts her regal stuff in Zelda garb while Yuri Kozukata can be seen exploring Mt. Hikami as Samus. It is unclear whether or not these costumes are character exclusive based on the images and video.

Heels I don't get, but this is a fashion confidence boost I can appreciate.

The exact method to unlocking these costumes hasn't been officially released, leaving fans wondering if the outfits are found in-game, as the series has done in the past. The word "unlockable" most likely indicates the fans won't have to download the costumes separate from the game in the Nintendo eShop. While there's no word on Fatal Frame amiibo support, there's a small possibility that players unlock the outfits through their amiibos, as seen in Super Mario Maker. There has been no news on additional outfits, Nintendo-based or otherwise.

From Exploitation to Inspiring

This new type of fan service turns away from the bikini costumes of previous Fatal Frame games. Fatal Frame: Oracle of the Sodden Raven generated plenty of news buzz not for its scares, but for its questionably sexy content. The bonus outfits were by no means a game requirement, but the mere option set some players back. 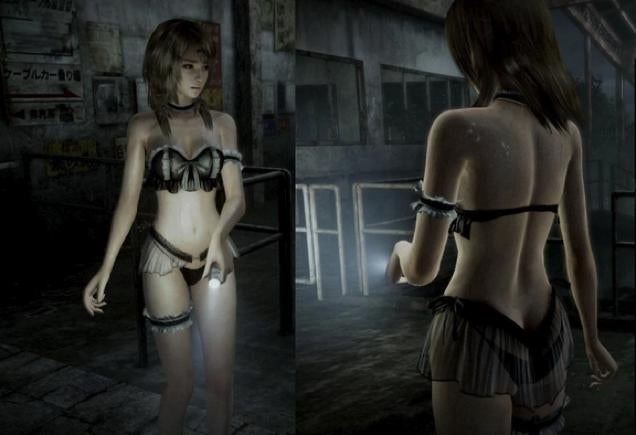 In comparison, Nintendo's new costumes follow a recent pattern of the company to expand the appeal of a handful of less popular games by utilizing unrelated but iconic franchises. The change may have been encouraged in part by the bad publicity gained in pursuit of the former sex-appeal method for Fatal Frame.

Princess of Hyrule, intergalatic bounty hunter, or neither?

Capturing ghost shots in swimwear certainly seems odd, but Zelda's royal dress at least provides some extra skin protection. Admittedly, I wouldn't want to be caught running for my life in either option. The added benefit of playing at legendary princess status simply doesn't come with underwear alone, though.

Some fans would argue that the Samus attire possesses its own sex appeal, given the skin-tight body suit. I say battle-ready armor shouldn't be compared to Victoria's Secret newest lingerie line. Samus' outfit is made for comfortable, free movement. I desire nothing less when visiting infamous Japanese horror locations during the witching hour. Which I obviously do frequently, so I would know.

Whether or not the new costumes ultimately take away from the player's frantic jump scares or add some fun to gameplay is up to the individual fan to decide.

The game itself launches on October 22nd. The title will be a digital exclusive for the Wii U in North America and can be purchased for $50 through Nintendo's eShop. For those wary of commitment, there's also a free downloadable trial version that includes the prologue and first two chapters of the game. Europe will have a limited retail release.

So who's up for some horror cosplay action? Are there any Nintendo characters you would like to see referenced in Fatal Frame? Share any and all opinions in the comments below!