Why Woodie is the best Don't Starve character

Woodie is life. Woodie is part beaver.
by Andrea Koenig

I've had my fair share of issues adapting to the world of Don't Starve and its multiplayer setup because I'd always manage to die before I could form a technique.

That all changed when a session as Woodie came into the picture. Woodie is a lumberjack with his talking axe Lucy. According to his character information, he has a "terrible secret," of being a Were-Beaver.

The best thing I found is that Woodie is a pretty good early on character. Whether he's a human or a beaver, he's fast and efficient at looting through an area. Players just need to have a plan or lose him to insanity. 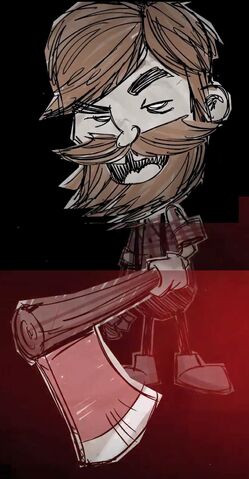 So the first thing you notice is his companion fire axe, Lucy, that talks to him. She is part of your inventory at start, has no durability meter, and swings faster than a normal axe.

That's a huge plus for starting out, especially if you pair him with others in Don't Starve Together, like Wickerbottom who doesn't need a science machine and can get you a backpack early on to load up on tons of logs.

Lucy can only be destroyed if using her to attack a Nightmare Throne, so go wild. If dropped, she'll freak out if someone else picks her up. If you happen to lose her during a rampage in Were-Beaver mode, she will show up on the map.

Very convenient A+ companion. Get yourself a Chester and you're invincible.

The second thing you notice is the added "Log Meter" to the hub. You will need to keep this up like other meters by eating logs and sticks. Lucy reminds you if it gets too low from chopping too much, and you can watch it deplete on full moons.

This may sound like an extra hassle, but it's not if you manage it right. Eat 2 logs per tree you chop, and you'll likely be fine. That also means you need to look for fully grown trees to get a surplus pile going.

Your other option is just to chop until Lucy tells you to "chew on a twig or something." That's if you really want to hear her squeaky clarinet voice that much.

This is a blessing and a curse. You're nearly invincible, but you put your sanity on the line.

Were-Beaver Woodie can chop, destroy, fight, dig, and mine. Use him to clear areas of trees or stumps, fight difficult enemies to get special loot drops, and stock up on supplies.

As for the sanity issue, the primary solution is to plan. You have 3 options to plan for, so make sure you know which route you're taking:

Make sure you have wood nearby and several helpful sanity items in your inventory for when you change back. Stock up if you know a full moon is approaching. 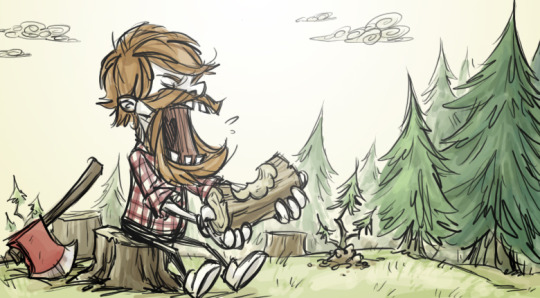 So you get in-game and find out this guy has a permanent talking axe, a simple additional hub meter, and a super cool nearly invincible alternate form. What about all of this makes him so great?

All of the above.

Wood items are a constantly needed source.Yes, Woodie eats some of the supply, but having fast chopping skills with an almost invincible talking fire axe helps. Think about it:

The power of the beaver is yours

All of this can be unleashed and used in a variety of different ways. Whether you're new to Don't Starve or know your way around surviving the wilderness, Woodie is definitely a character that no one should overlook.

Have a character you think is better? Let's duke it out in the comments.