The 3 Biggest Differences Between Paladins and Overwatch

Paladins and Overwatch are pretty similiar games, but what features make them different?
by Clayton Reisbeck

This has been one of the harder pieces for me to write. As someone who absolutely adores Overwatch, moving to Paladins was a bit of a struggle. I've played countless matches and spent hours on hours playing Overwatch. I am firmly rooted in the mechanics of how Overwatch plays.

I mention all of this to let you know I am biased.

Moving to Paladins to research this article felt like a step down for me. It's not because the two games are exactly the same, however, because they aren't. Paladins has some very big differences that make it feel just different enough to be its own game. Let's take a look at some of those now.

1. You are locked into one hero for the game.

Unlike Overwatch where your team composition changes each time a new obstacle is presented, Paladins locks you into one hero for the entire game.

Before starting the game, you are sent to a character select screen. Only one of each hero can be selected per team. After selecting your hero you can customize parts of your hero's outfit with whatever skins you may have unlocked or purchase.

Once the game starts though, you are locked into that hero. Because of this, your team can feel a little overrun if the other team picks heroes that are all more powerful than your team's heroes.

As someone who came from Overwatch to this game, this felt a little upsetting. Seeing a hero who was clearly blowing my entire team away without being able to turn around and swap to that hero's counter made for a bit of a frustrating game at times.

For someone who comes from a MOBA background though, this may be right up your alley. In a MOBA, all the players are locked to a single hero or champion and you must rely on different factors to overcome the enemy team. Seeing as a MOBA developer created this, I can understand why this was their way to go about character selection and design. There are times in a game of Overwatch when the team needs someone to switch off the hero they're playing to take care of a problem that the other team has presented. If that person isn't able to play the counter to that problem, the team can be in trouble. Paladins removes this counterplay entirely by locking you to that one hero.

To help with turning a fight in your favor when your team's composition isn't cutting it, Paladins employs different builds that buff your character while you play. The first of these builds is presented in the form of cards that are unlocked in the game's loot chests or bought with in-game currency. These cards are tied to specific characters and give them different boosts to various aspects of how they play. It could be something as simple as cooldown reduction, or effects like adding life steal to your attacks.

On top of your card sets that you take into battle, there is an in-game shop that allows you to buy different boost that are immediately applied to your character. The boosts are divided into four different categories; defense, offense, mobility and health. You are only allowed to purchase one skill from each of these categories, but each skill has an upgrade path that strengthens those boosts as you play.

Item builds have never been something I personally liked; it's what drove me away from games like League of Legends and SMITE. I didn't like having to learn about all of these items or what order I needed to upgrade my abilities. I just wanted to get into a game and play. If this is something that never bothered you though, this may be right up your alley. 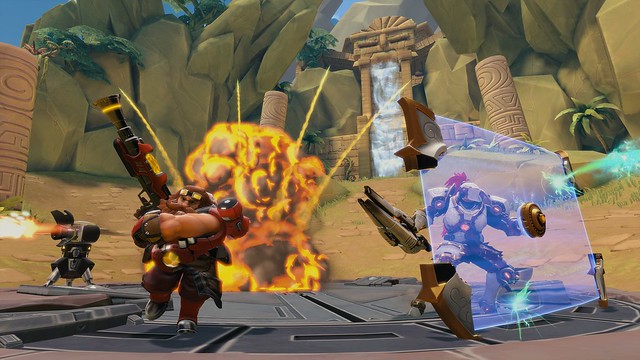 Perhaps the biggest difference between Paladins and Overwatch is that Paladins is free to play. There's a certain common knowledge about free to play games that most gamers should recognize when they play them, however. Free to play games often lock certain parts of the game behind paywalls or timers that can make for a challenging experience, and Paladins does the former.

For example, you only have access to 8 characters (9 if you link your Twitch account with your Paladins account) and have to buy all the others with either the in-game gold that you earn through playing, or their crystal premium currency. You do have the option to pay $19.99 which gives you access to all current and future characters, however, along with some other bonuses. 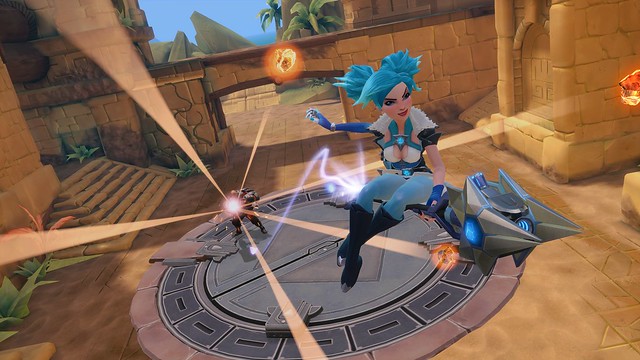 This whole monetization model should feel familiar to most MOBA players. If this is something you are willing to deal with, Paladins should pose no problem to you. If you prefer having everything the game is going to offer by paying one price, Overwatch is probably going to be more your speed.

To give credit where credit is due, Paladins does feel like you could play the game without putting any money into it and still have a great experience. The issue I take with it is that the second you want to do anything more with the game, you're probably going to have to shell out some cash. Even if you decide that you want to spend that $19.99 for all the characters, the moment you want to customize the look of any of the characters, you'll have to spend some money.

I will say that Overwatch isn't much better, however. Even though I spent $60 for the Origins edition of the game, if I want to unlock all of the cosmetics, I will either have to play for years or shell out some money. The reason I still lean towards Overwatch in this case is that all I have to spend my money on is cosmetics and nothing else. 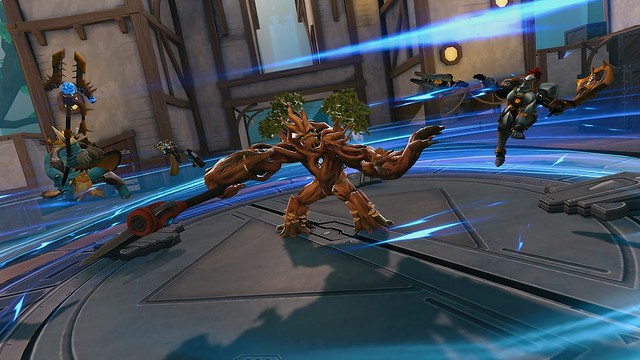 If you were to sit me down and tell me I had to choose between Overwatch and Paladins to play for the rest of my life, I'll choose Overwatch every time. I just prefer its gameplay and design as a whole. That's not to say Paladins is a bad game - it isn't. I won't deny that I had some fun while playing. I just found myself consistently thinking I'd rather be playing Overwatch all while I was playing Paladins. I think this has to do with what games I prefer to play as a whole.

Paladins feels more like the MOBA shooter that Overwatch was classified as when it first came out. This comes as no surprise to me, as the developers behind Paladins also created SMITE. If this kind of gameplay and mechanics are more your speed, you're probably going to love the game. If you prefer a more team-based game, Overwatch is definitely going to be the game for you.

Which game do you prefer? Let me know in the comments!