Teeny Titans 2 might be short in stature but it packs a substantial punch for a mobile game.
by Steven Oz

It's not often that a mobile game catches my attention. When I do play, I usually play simple match-3 games or time-based city building games.

You play as one of the Teen Titans (Robin, Raven, Cyborg, Starfire, or Beast Boy) trying to uncover the mystery of who is trying to put the Teeny Titans Figure Company out of business. It is your job to battle various characters from the DC universe and discover the truth.

It's a simple-enough story that guides you along without burdening you with heavy story content, which is good for a mobile game because you'll most likely want to jump in a just play the game right away.

For a mobile game, the gameplay in Teeny Titans 2 is done very well. It provides all the elegance of a turn-based game with an adventure that spans the scope of famous locations in the DC Universe.

The turn-based battles are a fun way to showcase the various Teeny Titans for sale in game. If you have never played the original game, there is a slight learning curve, but the game eases you into it with a simple tutorial section. Battling your Teeny Titans is a fun mix of beating your opponent to the attack and managing resources that pop on your screen. 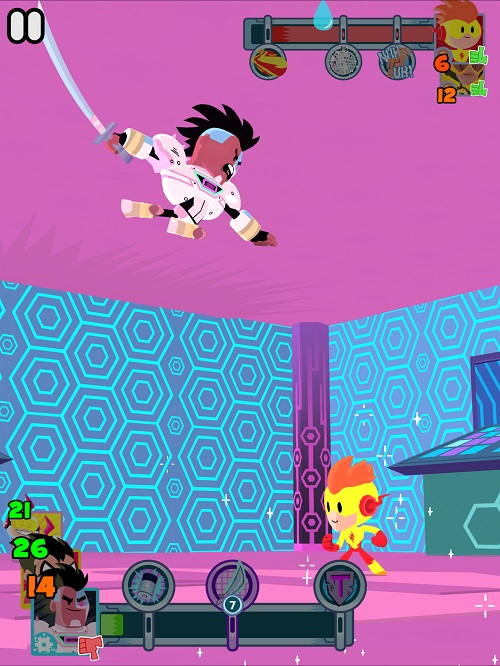 You can bring up to three figures in to your party from your total party of six. Each of these figures has their own power to choose from as the battle bar meter races forward. As you use your powers, it drains the meter and certain powers have to charge up before you can use them.

Some of your powers are also buffs for your characters, and these can raise your attack power, defense, or health. The cool thing about the game is your opponent is doing the same thing. So, you have to watch your opponent's battle bar to make sure they are not charging up to attack.

Each figure also can be modded with Mod Chips. These mods have varying abilities that can be added to your figures. Some offer health benefits and others can slow down the opponent's battle bar.

The adventure part of the game is fun but could be more refined. All you really do is tap and swipe to move your character around. As you venture into this world, it has night and day cycles, which bring up new challenges and shops.  There are numerous side quests that can give you new characters and mod chips.

The only problem is a few of these quests don't show you where to go. You get lost in the each of the locations. While that can sometimes be good, most of the time, it can be quite boring just going to each character on the map trying to find out if they are the one you need.

Overall, Teen Titans Go! Figure is an impressive game. It fleshes out the Teen Titans Go! universe while providing a silly story about collecting. While there are some minor problems with the adventure, it does not impeded the extremely well-done turn-based battles and great visuals.

I was compelled to move forward and find out what happenstance was unfurled in this land.

You can download the game now for $3.99 on the services listed below on the Apple App Store, Google Play, or Amazon.

[Note: A review code was provided by the publisher.]

Our Rating
8
Teeny Titans 2 might be short in stature but it packs a substantial punch for a mobile game.