Get ready for the release of Tales of Symphonia Chronicles in early 2014.
by Courtney Gamache

Today Namco Bandai has announced that on February 28th, Tales of Symphonia Chronicles will be available in Europe and Australia. Although the game released earlier this month in Japan, it's currently unknown when the game will be available for the US, but it's foreseen to be in 2014.

What is Tales of Symphonia?

Not to spoil the game for anyone, but Tales of Symphonia is rich in characters and game plot. You'll be able to enjoy this game with family and friends alike. The graphics are family friendly and not too intensive or violent. Tales of Symphonia was once released on the GameCube and then on the PS2. In addition, there has also been a manga and anime spin-off to enjoy with the game. All in all, a great game to enjoy that also has eleven installments.

When looking at the game, I can't help but feel a Final Fantasy fighting style about it. This game will definitely be on my list for the end of the holiday season. 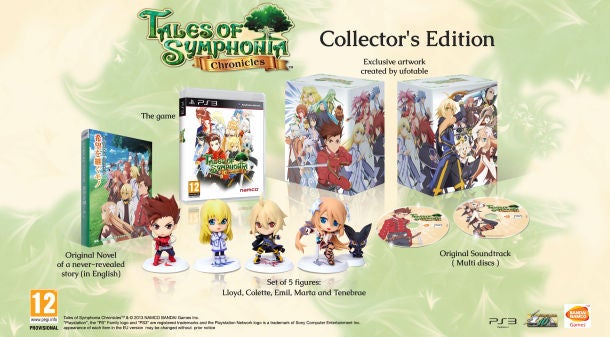 To celebrate Tales of Symphonia Chronicles, there will be 10,000 copies of the collector's edition available throughout Europe and Australia. Featured within the edition are 5 action figurines, a paperback novel, a multi-disk soundtrack, and the game. Definitely something to look forward to for any Tales of Symphonia fan right after the holiday season.

Do you plan on getting Tales of Symphonia Chronicles?

An online college student studying Business Administration and International Business at SNHU. I play a lot of different games, but I prefer management ones, including Minecraft, RollerCoaster Tycoon, Borderlands, and Assassin's Creed.