Tattletail is basically what you get when you cross Five Nights at Freddy’s theming, Slender’s gameplay, and an 80s VHS aesthetic with complete and utter tedium.
by SirBrodacious

The game is $5 and an indie-game, so I didn’t have too high of expectations going in, in fact I was pretty impressed when I launched the game! The game looks great and while the 80s look isn’t original, it fits the theming nicely. 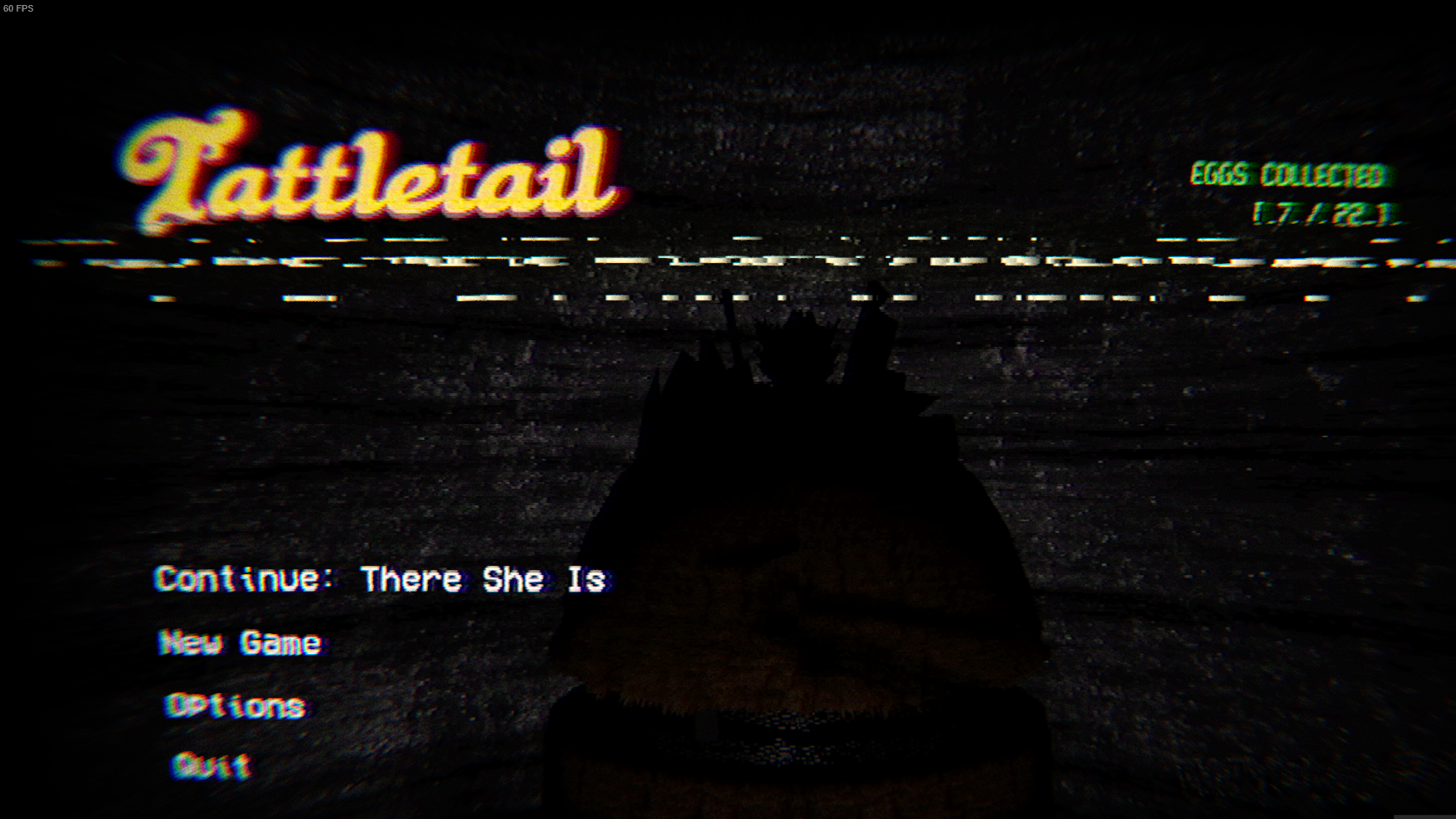 It’s when I took my first step that I realized this was going to be a “fun” experience. By that I mean making fun of it in my video was genuinely quite fun, but the gameplay was rather terrible. The first thing I noticed was that your character sounds like he’s walking around wearing heavy duty combat boots, which, though hilarious, destroys any amount of immersion I could have had sneaking around. This may have been fine if the game wasn’t a horror game, but it is a horror game and if you aren’t immersed in a horror game, well it isn’t going to be scary.

You see, the main mechanic is noise based stealth. Shaking your flashlight (which charges it), sprinting, or neglecting your Tattletail’s needs all cause noise. Of course, when sprinting is just as loud as “silent” walking, I found myself laughing more at the mechanic’s absurdity than being horrified by it.

The main gameplay to Tattletail involves three mechanics; hiding from Mama, who is the game’s antagonist, keeping Tattletail’s needs filled, and completing fetch quests. Every single one of them get’s tiresome very quickly.

Now let’s talk about the stealth. Have you ever played Slender: The Eight Pages? 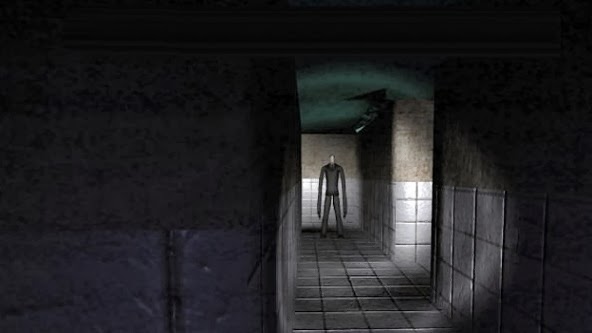 The gist of the game is that you’ve got a creature following you around that can teleport to random locations, and if you look at him, you die. In the game you must collect eight pages, with Slender Man, the creature chasing you, getting faster and generally more aggressive as you go. This is basically exactly how Mama behaves, except Mama is significantly less threatening.

For a starter, Mama does not move unless she can see hear you and looking at her only kills your flashlight. Another thing that irritates me is that she doesn’t get any more aggressive or dangerous after the second night. The only time you get a challenge is in day 4, during which you are forced to search for candles that are hidden in vases. I personally only found it mildly challenging, and that is because the game doesn’t tell you where the flipping candles are, so I spent about 15 minutes wandering until I randomly found an intractable vase.

Through the game, I only died only twice, once in what appears to be a bug, as when I looked through my footage I found no indication that Mama was nearby, but I’m fine with one weird death. The thing is, I only died once more, and that was because I intentionally ran straight at Mama to kill myself, and I had to do this twice as the first time failed and she just teleported away. Very scary.

The second main mechanic is that you must take care of your Tattletail, feeding it, brushing it, and charging it. The thing is, this makes for a tense situation only once or twice as the game rarely sets up a proper scenario to make full use of this mechanic. Most of time, it simply bored and annoyed me as I had to go and fill up all the bars before doing anything. While doing this, I was under no threat at all, meaning it was simply a chore I had to do before I could maybe have some fun.

Now for the giant festering elephant in the room, the one that everyone somehow manages to ignore; fetch quests. The entire game, save for three small missions on day 2, is comprised of nothing but fetch quests. The only variety is three “survive this long” missions that all happen consecutively on day 2, and that’s it. The first task in the game is a fetch quest, open your Christmas present early, and the final task is a fetch quest, find the candles. The only variety in these little tasks is that the location of the items becomes more vague toward the end. Now, theoretically this could be a strong core mechanic, however, because Mama is about as intelligent and threatening as a bag of chips, I’m more likely to tell die of sheer boredom.

The game performs adequately, I was able to run a solid 60FPS throughout and the game never crashed. This is a Unity Engine game, and I have the suspicion that the developer used the default movement script, as movement feels a little stiff, but besides that the game didn’t perform poorly. The game also looks pretty good, though I’m not a fan of the bloom used on the final day, as it appeared very blurry. The lighting effects however were quite nice and the furbies weren’t poorly animated. 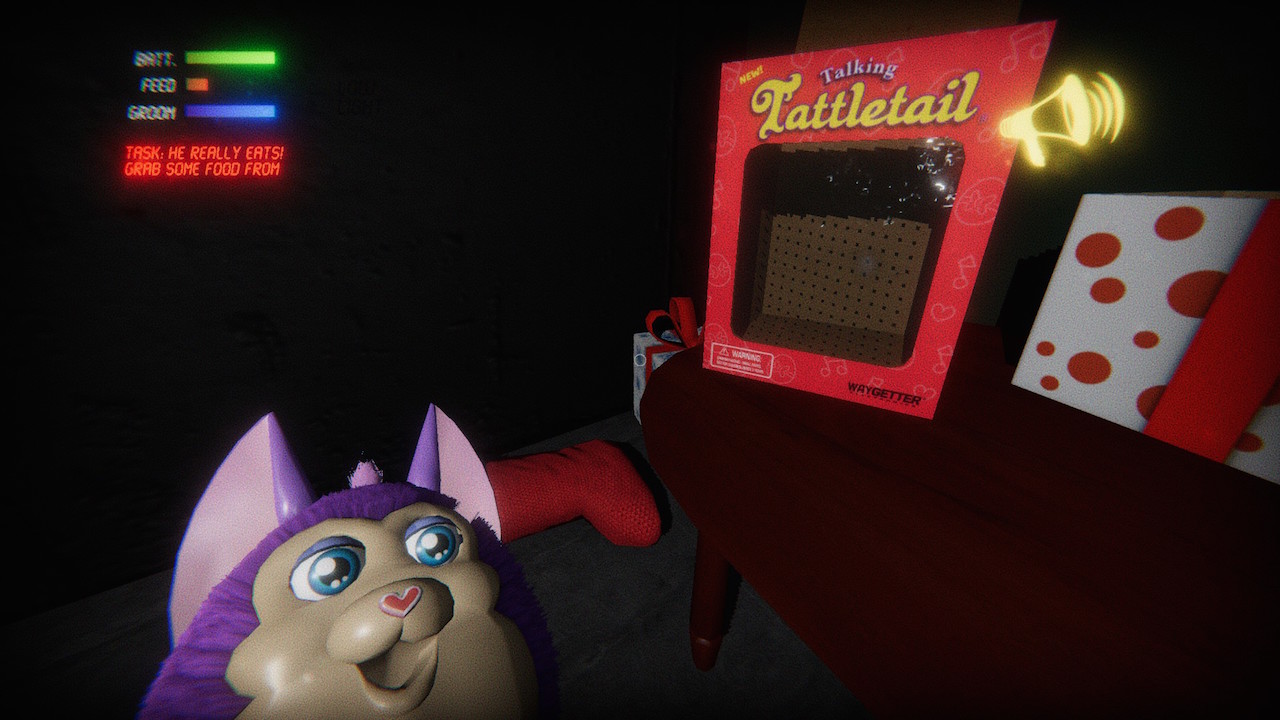 The sound wasn’t half bad in this game, with a few exceptions. From what I can gather, the Tattletails imitate the look and sound of Furbies very well. The sounds Mama makes also are done quite well, and they would be terrifying if she was any threat at all.

Of course, some sounds are so poorly done it’s frankly quite hilarious. The character’s footsteps sound like that of a soldier marching on concrete, despite you supposedly being a child generally walking around on carpet. It’s even more ridiculous when you are in garage or the bathroom, as it sounds like you’re in a flipping amphitheater. Again, I laughed more at the sound than I was spooked by it.

Tattletail’s only $5 on the Steam store, which isn’t much. The problem is Five Nights at Freddy’s is also only $5 and while I’m not a big fan of that game either, it pulls off the “scary animatronic want to kill you” theme much more effectively and provides significantly more challenge. You could also get Slender: The Eight Pages for FREE and have effectively the same gameplay with better sound quality, or Slender: The Arrival (by the same dev) for $10 (but while I haven’t played it, it has a pretty positive rating.

Our Rating
3
Tattletail is basically what you get when you cross Five Nights at Freddy’s theming, Slender’s gameplay, and an 80s VHS aesthetic with complete and utter tedium.
Reviewed On: PC
What Our Ratings Mean