Rosalina and Luma will be living at Target stores in the future.
by TumsST

It appears that another Amiibo figure will be joining the likes of Meta Knight, Lucario, and Shulk in terms of store exclusive figures. The Rosalina and Luma Amiibo figure will be making their new home address at Target stores. The figure doesn't hit store shelves until next year (Feb) but like the Amiibo that came before her, pre-ordering early, might be the only way you get your hands on the Rosalina and Luma Amiibo figure. It looks like Nintendo didn't anticipate how many people would try to collect the Amiibo because it looks like there are certain figures that are becoming very hard to come by in stores. 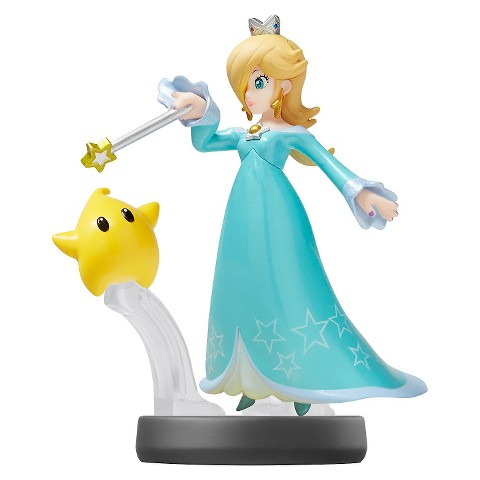 It has been announced recently that "discontinued" Amiibo figures that sell out of their first run in stores may get a second shipment/store run after all. Out of the first wave/batch of Amiibo, it looks like the Wii Fit Trainer, Marth, and the Animal Crossing Villager have become the first "where can I find" Amiibo. Could Rosalina and Luma join this list of can't find Amiibo or will Nintendo learn by next year that collector or player, people are going to want these figures.

Nintendo has stated that "not as popular" Amiibo will be "discontinued" but might get a second chance in stores eventually. That's good news for all the people who couldn't get their hands on the Villager, Marth, and Wii Fit Trainer. Also, Super Smash Brothers for Wii U and the Amiibo figures has done so well, saleswise, that it's a no brainer for Nintendo to keep them on the shelves.