Rising Islands has an Identity Crisis that leaves it unable to function nearly as well as it should.
by Angelina Bonilla

Rising Islands is a game developed by Lone Hero Studios and published by SOEDESCO Publishing.

It’s a parkour style action platformer with a mechanic that allows the player to switch between dimensions at will to conquer great obstacles. By great obstacles I mean walls that you run up, down, side to side and all over the place on. This is one of the cornerstones of how the game works and luckily it functions well. There will be times where you’ll feel as though you’re right there with our lead heroine Hairo. The story of the game is basic, which is not a bad thing, because a simplistic story works well for a game like this. 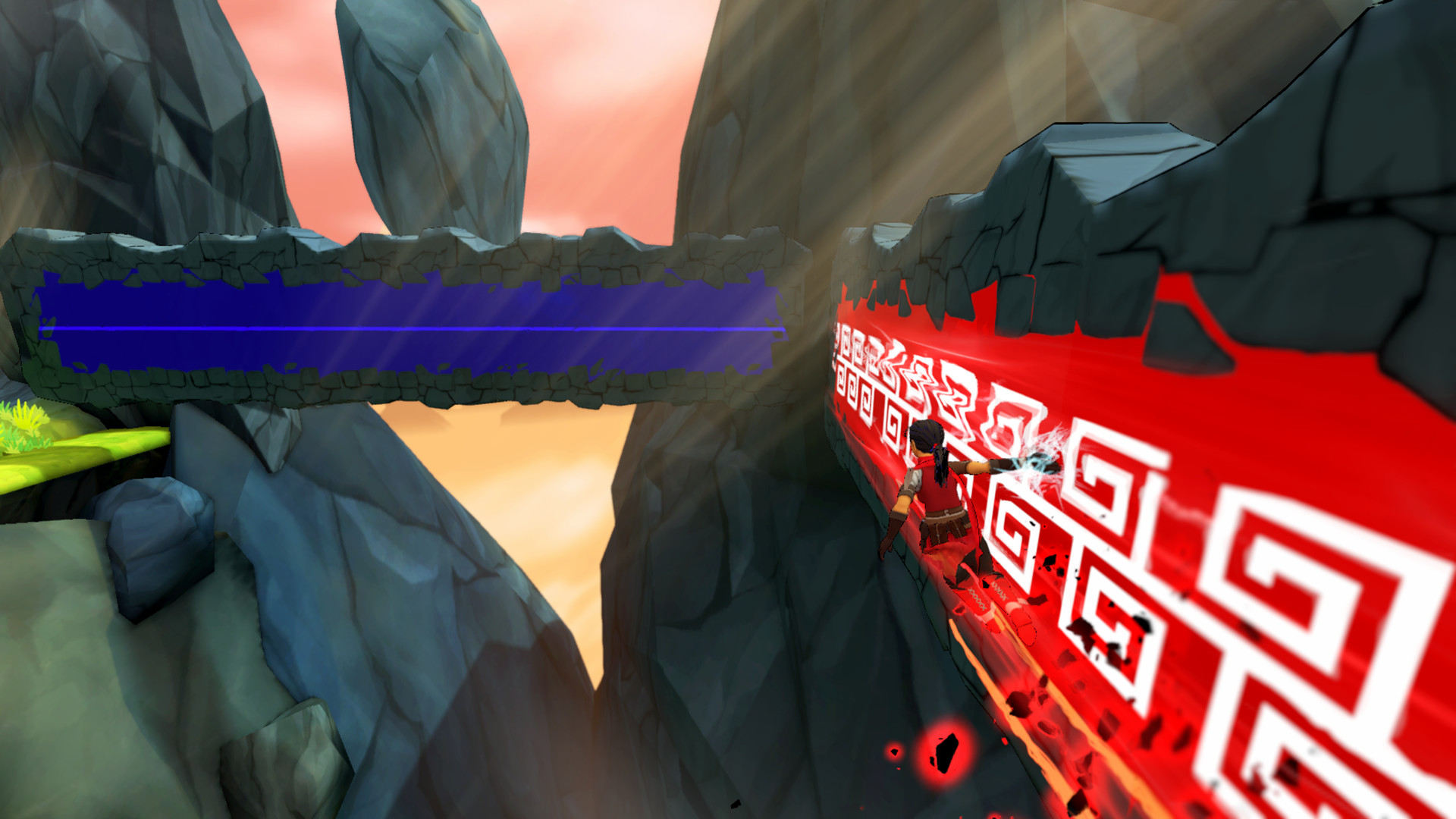 To save a world that is falling apart, you're recruited by two floating creatures to collect all the McGuffins.  You’re given the power to travel around the world with the red dimension and the blue dimension. However, the way the story is told is a bit odd, it's all told via small text boxes with floating creatures, but there’s no sound when they talk.

They resemble the likes of Sparx from Spyro or Murphy from Rayman, and yet there’s nothing indicating that they’re actually speaking. Which means the game’s opening cutscene was bizarrely quiet, and since our protagonist is also silent, the cut scenes can be pretty awkward. It also doesn’t help matters that there are quite a few spelling errors and grammatical issues with the game's text. Things that should have been picked up prior to release.

However, the story isn’t the focus of the game, as that’d be the gameplay. And while the wall-running parts work, the developers try to integrate other mechanics into Rising Islands as well and it gives some… mixed results. They try to integrate grinding on rails, air dash mechanics, jumping over long distances via a well-placed platform, and if you’re thinking this sounds a lot like a Sonic game, then you're right. When Rising Islands is trying to be itself the game is fine and it works for an action, parkour platformer. When it tries to be Sonic though, it doesn’t work nearly as well. It tries to make you do too many things at once, when those things don’t work nearly as well. 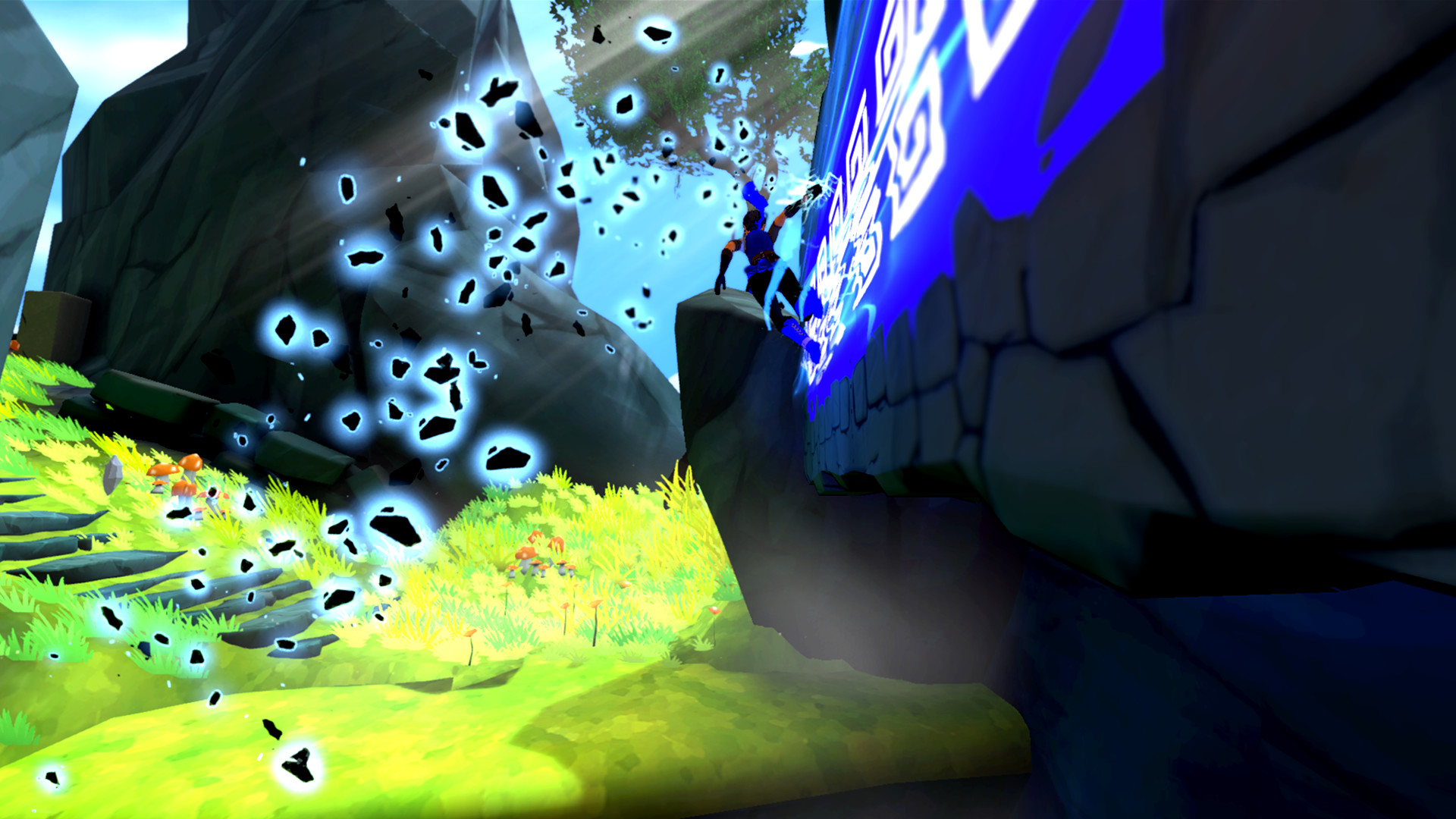 It starts like this: you are running down on a wall, you must quickly change your dimension in order to avoid the electricity, you do so, land on the platform, then boom you’re dead. What happened? Well you see there was a red ball on the platform that you were trying to jump on, that has the hitbox the size of the state of Texas, and if you just so happen graze, you’re dead.  But if by some miracle you manage to avoid that, you have to run on the wall, platform, grind on a rail, turn dimensions but then quickly turn back to grind on the rail again, but make sure to platform again, so you can later dash to another area and...

Do you see where I’m going with this?

Oh did I mention that it runs at 10FPS sometimes, which completely messes up your platforming? Even on computers with brand new graphics cards and processors? This game works when it works with the wall-running, dimension-swapping mechanic. Or when it spaces everything out and gives you time to get into a groove of running, jumping and platforming. When it decides to do everything all at once to test your skills, it just doesn't work, it just makes things a chore to get through. I had other complaints about the time trial mode being poorly implemented, but that was fixed in a recent patch. Problem with that recent patch: it deleted all of the game files. No, I’m not making this up, it deleted everything, all the save data, everything.

Rising Islands is a game that excels when it’s keeping its own identity. It can capture some great free-running aspects that we’ve seen in games like CloudBuilt. But when it tries to do too much at once, it diverts from its smooth flight and decides to go recklessly flying into a hurricane. It's a shame because there is a great game here.

Our Rating
5
Rising Islands has an Identity Crisis that leaves it unable to function nearly as well as it should.
Reviewed On: PC
What Our Ratings Mean