The Last Guardian Gameplay Details Leaked by the ESRB

New details of the highly-anticipated successor to Ico and Shadow of the Colossus have been leaked.
by Jared Elliott

Though it has experienced a multitude of delays since its announcement in 2009, The Last Guardian is slated for release on December 6, 2016 as a PS4 exclusive.

The game is directed and designed by Fumito Ueda, who received almost universal praise for his work on the cult classics Ico and Shadow of the Colossus. Needless to say, anticipation for The Last Guardian is palpable. 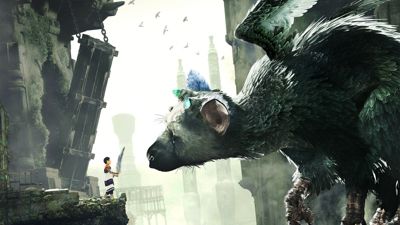 The ESRB assigned a "T" rating to The Last Guardian today while providing a summary of the game's content, which reveals previously-unknown details about various gameplay elements:

This is an action-adventure game in which players control a young boy as he explores ruins and solves puzzles with his giant animal companion (Trico). Players can command Trico to zap blocked passages or strike enemies with a lightning attack that shoots from its tail.

Enemies in suits of armor generally break into pieces when defeated, though soldiers sometimes emit blood-like flashes or red symbols when injured. In some levels, the player's character can rip the helmets off enemy characters, though no gore is shown. Cutscenes also depict acts of violence and occasional blood: Trico attacked by spears or swords; Trico bleeding from wounds. Similarly to Ico, it appears that The Last Guardian will feature enemies, a combat system, and weapons. Enemies found in the game may be reminiscent of the shadow-like creatures in Ico, as the ESRB mentions the player's ability to "rip the helmets off enemy characters" and the notable lack of gore. This implies that nothing exists beneath helmets in the first place, which raises a new question of whether The Last Guardian and Ico exist in the same universe.

The Last Guardian will be released December 6, 2016 exclusively for PS4.