The Rise of Medicinal Video Games

Is Project: EVO, a gaming platform aimed at treating mental health and cognitive disabilities, just the beginning of medicinal video games?
by KatherineZell

“Imagine what medicine can be.”

That’s the headline on Akili Interactive’s website, and I love it. What Akili has imagined is that video games can be used as a treatment for ADHD, Alzheimer’s, depression, autism, and traumatic brain injury. Akili aims to create a gaming platform that will help with the treatment and monitoring of patients with cognitive and mental health disabilities.

How will it work?

Using the latest research conducted by leading neuroscientists as well as a number of clinical studies, Akili is building a game with tasks that target different areas of the brain. Consistent use of these games has already shown improvements in concentration and attention in patients suffering from depression as well as children diagnosed with ADHD and/or Sensory Processing Disorder.

Back in 2015, an early version of Project: EVO was actually available for iOS and Android. In this version, players moved along a river and had to complete tasks such as clicking on a certain colored NPC, which exercised players' working memory. However, it has since been removed from iPhone and Android app stores, since Akili is currently focusing on clinical studies with their own platform as well as working with the United States Food and Drug Administration to make Project: Evo an official treatment for ADHD.

Robert J. Perez, Noah Falstein, and Glenn Entis have all teamed up with Akili to help push video games into medicine. To give meaning to those names, they are Cubist Pharmaceuticals’ former CEO, Google’s former Chief Game Designer, and DreamWorks Interactive’s former CEO, respectively. With these names on Akili’s team, they clearly want Project: Evo to be a genuinely immersive gaming experience on top of changing lives. 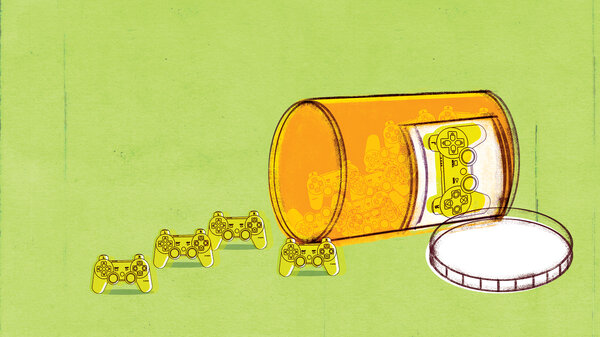 Soon there will be prescriptions for video games!

Akili’s work in conjunction with virtual reality improvements gets me very excited about the future of video games as a treatment for cognitive and mental health disabilities. I’m no neuroscientist, but it seems logical that taking something like Project: Evo into virtual reality would increase its effectiveness, as prospective patients could not be as easily distracted by the outside world. Is this as exciting to anyone else as it is to me? Anyone else can’t wait until children with ADHD and SPD can pick up a controller instead of a pill bottle? Let us know what you think!