I went through a crazy baking phase. For about 2 years, I was the go-to cake lady in my circle of friends, which lead to some late nights, fun ideas and huge stashes of food coloring.

Now that I am back to buying my cakes from the store like a sane person, I wanted to take a quick tour of some of the cakes I made during my mad baking phase, and share a few things I learned bleary-eyed and coffee-sustained at 2AM whilst cursing at powdered sugar.

I'll explain high level how to's below, with a general tips post at the end that includes a synopsis of tricks and unusual ingredients (which are usually very common things you just might not think of putting on a cake).

My biggest goal for each cake was to stay true to reference while making the entire thing edible if at all possible.

This cake was for a friend who really loved Bioshock 2. It was released around her birthday, and nothing says happy birthday like a terrifying cake that haunts your dreams with its delicious yellow eyes.

Based off a standard 3 layer round cake, I cut the center of the top tier to create the 'pipe' for our cake star to crawl out of.

The Little Sister was formed from sugar cookie that was then covered with custom tinted fondant and brushed with cocoa powder to give the impression of creepy dirt (as one might obtain whist pipe crawling).

The biggest challenge aside of color matching was getting the 3D white chocolate present box assembled. I melted down white chocolate chips flat on a baking sheet, trimmed squares, then melted and reattached the parts.

I have to say, this is one of my favorites. Everything turned out well, and it only took 3 nights to complete from baking to decorating.

This cake was less challenging than most because it featured flat colors and a shape that was non-gravity defying. What was a bit of a challenge was that the recipient was on a strict vegan diet. I did my best to do justice to the recipe I found, but I'm afraid this one came out tasting a bit like sweet cornbread.

The cake was a 3 tier square layer cake iced with custom tinted fondant.

A Word About Fondant Coloring

If you plan to do a lot of custom fondant coloring, invest in gel food coloring and a good exacto knife. Also some wax paper to cut on. And rubber gloves, if you don't like dyeing your hands exciting colors.

(Did you know that black gel dye will wash out green with soap, leaving your hands a fetching shade of fuscia? It's true!)

PChan is Made of Bacon

Well, not exactly. Unlike the Meat Cake that actually WAS made with meat, potatoes and bacon but LOOKED like cake, this PChan cake was made of cake that looked like bacon.

Allow me to explain.

PChan had some challenges. Some were presented by the design: Impossibly thin ears, protruding nose parts, tiny hooves, and a hugely expressive expression. Others, like wanting his interior cake-parts to look like bacon when he was served, were brought about by my own personal form of late night sugar haze hysteria.

Here's how PChan came together:

I created a 4 layer round cake out of layers of red velvet and strawberry cake batter swirled together, with white frosting layers to give it the appearance of meat marbling and carved to shape, like so: 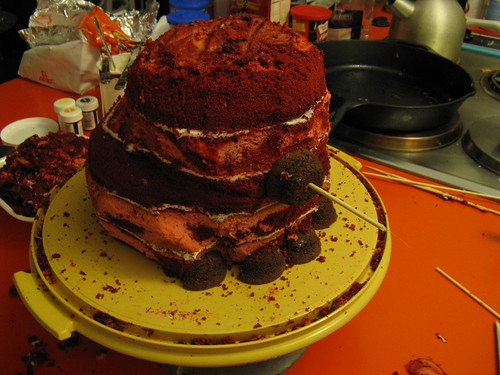 Brownie bites were used to form the nose and hoof parts. In part because they were the right shape (always be looking for yummy foods that are unusual shapes) and in part because I liked eating the leftovers.

I rolled out pie crust and cut the shape for the ears, as well as a curly tail bit I wrapped baked around a dowel rod.

Why pie crust? Because on the Bioshock Cake I discovered that sugar cookie dough RISES and distorts your shape. If that's what your going for, go with cookies. For more precise control, go with pie crust. The Little Sister sugar cookie was practically sanded down into shape.

The tail was dipped in melted frosting, then both the tail and ears were squished firmly (can you squish something firmly? I suppose) into the waiting PChan cake body. A thorough frosting followed. 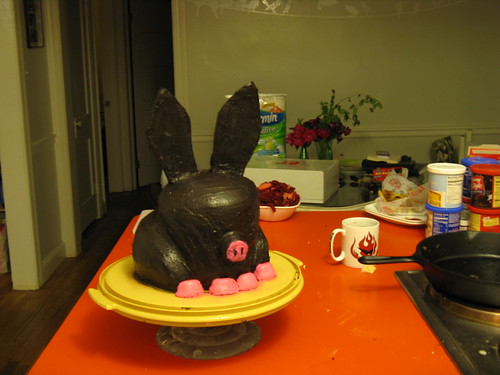 Ready for an action shot? 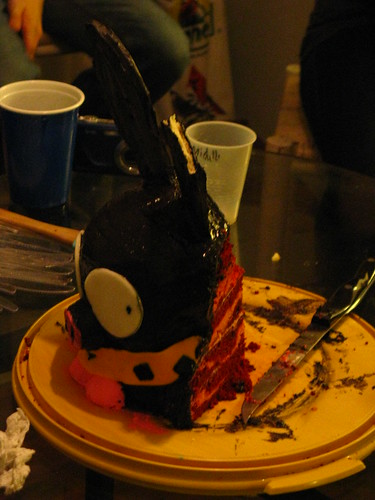 I just love how concerned he looks.

Tales of the Pain-In-The-Butt Fondant

Oh Tales of. With your lines. And your precision. And your wonderful damn characters.

These cartoon style fondant character cakes aren't usually very challenging (see the Mitsuru Persona Cake in a later slide as a good example) but when there are this many details, colors and layers, even a cut and dry posed character becomes a challenge. And wire frame glasses?

OF COURSE. SURE. WHY NOT?

You've only painstakingly colored, cut, and layered tons of fondant to reach the 99% done point and now you have to HAND PAINT TINY THIN LINES ON JADE'S FACE. No biggie. You mess up, you just have to take everything apart, make a new face, put it all together and try again.

Get some more coffee. Calm your nerves, and find a thin brush with some black gel icing. And for the love of all things sugar, try it on a scrap piece first.

When doing one of these style cakes, I STRONGLY suggest drawing a reference or printing one out, then cutting out all the shapes you'll need, noting what color they should each be, then tracing around them to cut the fondant. To achieve depth, pay special attention to what sits on top of what, don't just butt fondant layers up against one another like puzzle pieces, layer those suckers.

The Katamari cake was the cake that started the madness. I had baked one other cake in my life, a German chocolate cake for German class in high school that fell in on itself well before it made it to the 3rd period potluck.

What made me think a ROUND cake would be a great idea 3 years later? No idea. But think I did. And work it did. And then I had just enough confidence to embark on a 24 month baking odyssey. 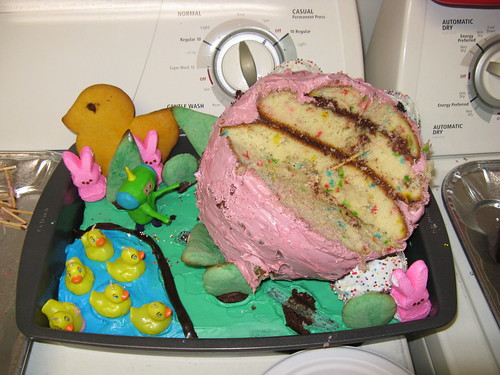 Like how we were serving from the washer? That's how recent college grads roll. (See what I did there?)

How to Bake a Round Cake

I made 2 circular (usually referred to as 'round' but as this cake shows, that isn't quite accurate) slab cakes and baked some extra batter in the bottom of a metal bowl. Then I frosted between the layers, put bamboo skewers through it every which way, and stuck it in the freezer. When it was good and frozen, I took it out and iced it. Then repeated the freezing and one more icing layer.

Pixel Cake: Not for the short of attention span

I essentially iced a 13" x 9" single layer cake with a sky blue icing, then carefully placed either chocolate, white chocolate or peanut butter chips point down on the cake to represent black, white, to-be-colored, or brown pixels. I painted the white chips with the appropriate color gels, cut out white world bubbles from fondant and put in the text using a mix of tube gel frosting and painted gel color.

Pretty cool looking on the table? 2 of 2 dragons say yes. 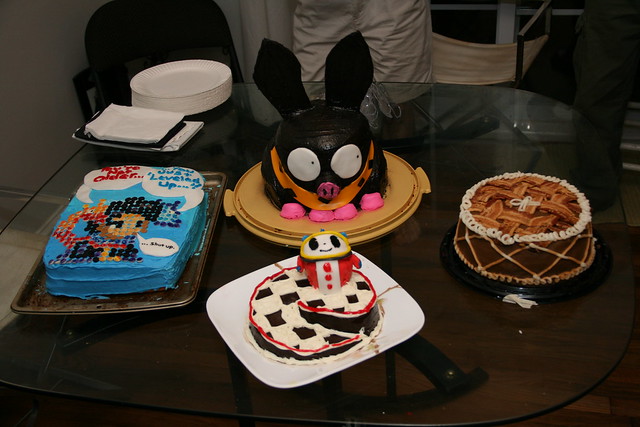 Baking 'Til the Dark Hour

This one was pretty simple. Teddie from Persona 4 made from 2 cupcakes smooshed together on a round cake that was shaped like the entrance to a tower level.

I didn't even try to put his legs in there. That would have been madness. His arms were made of pie crust though,. Yummy, crunchy arms.

While we're on Persona themed cakes, here's that easier cake I promised back on the Jade from Tales of the Abyss slide. This Mitsuru Kirijo character cake was fairly simple. Here's some of the things that make this a good type of cake for a beginner:

Limited color pallet: You only need to mix 4 colors for this - dark red for hair, bright red for eyes, bow and lips, black for line details, and skin tone. Fondant comes in white, so you're off the hook there.

Single eye: Mitsuru is one of many characters with asymmetrical bangs. This is a godsend for people creating fan art on paper or on cakes because getting eyes to look right when there are two of them to coordinate is WAY harder than when the character sports the half blind hair look or a fancy eyepatch.

Simple lines: Far less linework than the Jade cake, though I did fancy it up a bit making fondant shirt pleats and buttons.

You'll note that even while fairly simple I managed to get the hair color pretty off. In trying to differentiate the color of her hair from the color of her red bow, I made her look more brunette than redheaded. Ah well. They can't all be winners.

I pondered going with the good old fashioned barbie cake on this one.

I wanted to keep the cartoon-yness of Princess Peach's design, and succeeded a bit more than I intended to with a big old bobble-headed gal. But it was a huge victory to make it ALL edible.

The rest is MAGIC.

Steps that Save Time (and Heartache)

Even if you deviate along the way, a plan helps you figure out what you want the end result to be, make a materials list, and generally makes you think your way though the cake up front. It's a good thing. Below was my Bioshock cake plan next to the in-progress cake itself: 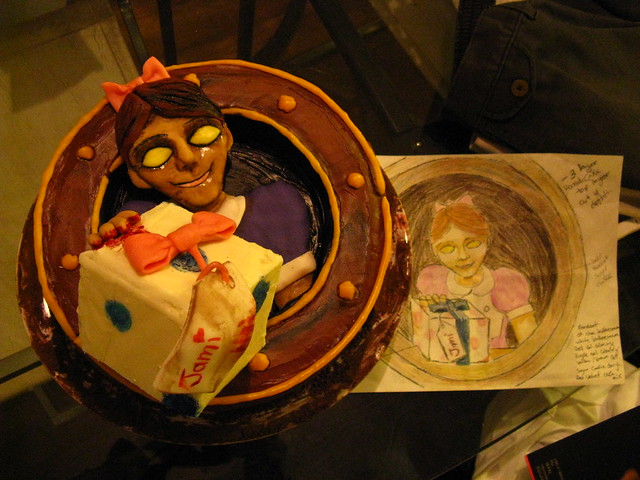 Will this cake be traveling? Does it need to fit in a freezer until it's go-time? If your cake must fit in a certain space, travel to a different place, or be displayed on a special cake base, think about that in the planning phase. I nearly had a Snoopy cake collapse once because I failed to account for the 2 hour sunny car trip it would be taking. 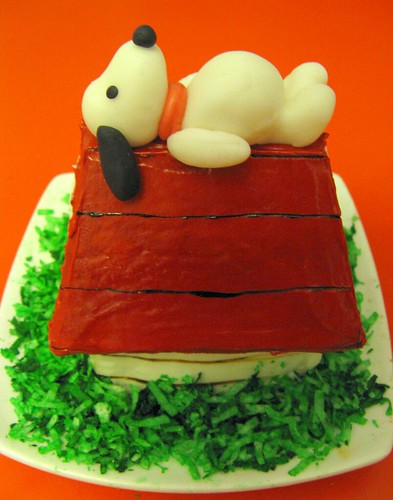 It looks pretty okay here, but trust me, it's a flattering angle. Don't wait 'til you've assembled and decorated to move you cake to it's final base, either. That's asking for gravity to do unspeakable things to your creation. If AT ALL POSSIBLE, build your cake from base to finish on the platter or serving surface that will be the final one.

Once you have a plan that has accounted for the design and engineering of your cake, be sure you buy all the things you'll need and have them on hand. It stinks to be 3 hours into the baking process and realize you need magenta food coloring you can only get from a store that closed 30 minutes ago. Be warned that these types of cakes aren't cheap, between the basic cake ingredients and the decorations, you can spend between $30 and $50 dollars easily, especially if you need to invest in baking sheets and other equipment.

Leave Yourself Plenty of Time

I usually give myself 3-4 nights worth of cake time. Because I was doing this in my spare time after work at night, I had at max 7 hours or so, and cakes take time to bake, cool, crumb layer and decorate. I aimed to have the baking done one evening, basic assembly and crumb layer done night 2, and the finishing touches on night 3. Night 4 was for emergencies. I often created cakes on a shorter timeline, and it always worked out, but especially at the start give yourself time so you don't stress out.

Former Editor in Chief at GameSkinny. I am the Gray Fox. Questions, comments, feedback? Bring it. Amy.White (at) GameSkinny.com