Since we're not in space did Twentieth Century Fox actually hear the screams of disappointment over the last Aliens game?
by Eli "The Mad Man" Shayotovich

Might a new Alien video game be in development?

The folks at Silconera.com are reporting that Twentieth Century Fox filed a trademark application for something called Alien: Isolation on October 16. Now, before you get your standard issue Colonial Marine undies in a bunch, this trademark can be used for an assortment of things including mousepads, decorative magnets, eye glasses... and yes, computer game and video game software.

We're not really buying that a line of fashionable Alien: Isolation eyewear or mousepads will soon hit store shelves, so a logical assumption can be made that someone, somewhere is actually working on another (hopefully more enjoyable) Alien game. Why do we say that? We point you to an announcement Sega made in May of 2011 that their UK-based studio, The Creative Assembly (makers of Total War), was working on an Alien action game. At the time of the announcement wild claims were made about how fantastic the concept was (a peer to Dead Space 2?) and how amazing the graphics were going to look for this triple-A project. Yet, the game apparently drifted into a black hole because nothing ever materialized. And let's not forget that way back in 2009 Sega cancelled the RPG that Obsidian was working on. So... could Isolation be a reboot of one of these projects? 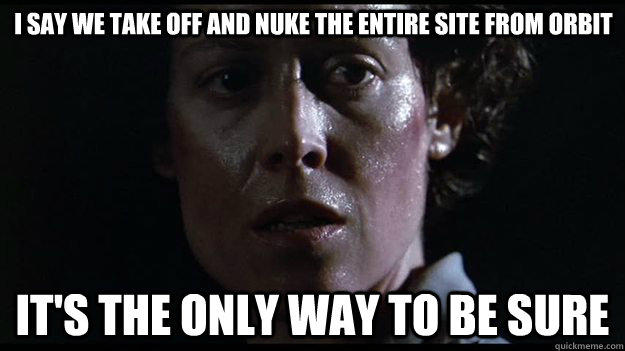 After the abomination that wasAliens: Colonial Marines (a game which by all accounts should have been nuked from orbit) and the lukewarm response to Prometheus (a movie that this writer actually enjoyed immensely), one might think that the Alien franchise should be cryogenically frozen for a few years to let nostalgia creep back in. Apparently not. It doesn't take a xenomorph biologist to see that something's up.

In 1979, Ridley Scott's Alien showed us that a horror movie set in space could be absolutely terrifying, and what James Cameron did with the Aliens sequel in 1983 raised the bar for what a well executed science fiction action film could be.

So it wasn't the jalapeño poppers causing my heart burn!

Sadly, the greatness of those two films has never really rubbed off on other "Alien" projects, which is incredibly frustrating given the fascinating and visceral mythology this franchise offers. The video game industry is filled with great talent... there's absolutely no reason that one of them can't make an Alien game that doesn't suck.

Late yesterday afternoon Kotaku reported on this, but included a great deal of additional info about the game itself. According to Kotaku's source (someone deep inside Weyland-Yutani Industries?) Isolation will focus on Amanda Ripley, the daughter of the main heroine, Ellen Ripley, and will be a first-person shooter full of stealth and horror elements. It's taking queues from games like Dishonored and Bioshock, and will be "heavily inspired by the first Alien movie."

Sega took the poor reception of Colonial Marines to heart and really wants to make a better game this time around.  We'll see...