ArenaNet first released Guild Wars 2 in August 2012. Five years later, the game has seen the introduction of one expansion and a series of smaller Living World updates that advanced the story.

Enter the next full expansion to the game, Path of Fire, which is set to be released next month. Leading up to its release, ArenaNet invited players to participate in free preview weekend August 11-13 (with another coming August 18-20). This first preview weekend focused on PvE content, while the second is expected to center on allowing players to try out new abilities in PvP.

The previous expansion, Heart of Thorns, seems to have set the pattern for expansions that would follow. Prior to announcing Heart of Thorns, ArenaNet introduced players to a new main antagonist using Living World updates. They repeated that pattern here, bringing back the god of war that players saw referenced in both Guild Wars and Guild Wars 2. This deity, Balthazar, is no longer a benefactor to mortals. It is up to the players to find out why -- and stop his plans before he brings about the end of the world.

Heart of Thorns also introduced a number of new mechanics into the game. Among the most immediately impactful was the introduction of gliders. These tools were given to players early in the expansion and became a popular way to get around the world. In many newer maps, gliders were often the only clear way for players to reach their destination. Like many other aspects of Heart of Thorns -- such as interactions with special vendors and objects in the world -- gliders were reliant on the Mastery system.

This was a new method of horizontal progression ArenaNet introduced, allowing players with max level characters to unlock new abilities or quality of life improvements. The system appears to have the goal of adding meaningful progression without trivializing the abilities and equipment players already have. 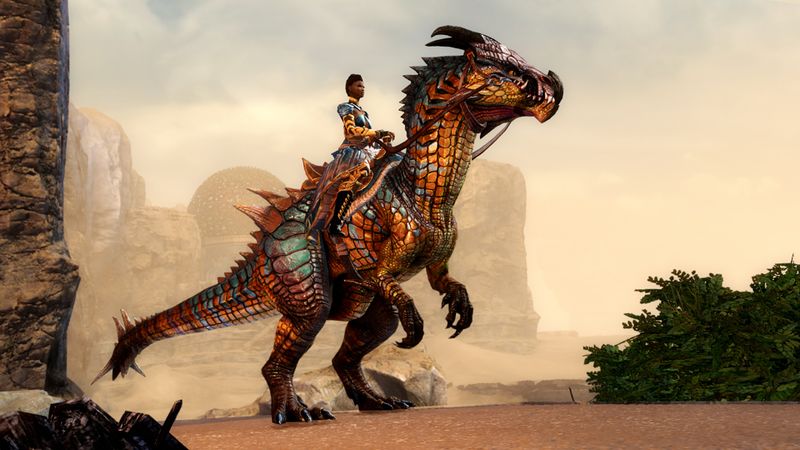 Path of Fire looks to develop on these ideas by introducing mounts, which are also based on the Mastery system. In addition to providing faster movement through the world, each mount will have a unique movement ability and be able to reach otherwise inaccessible areas.

This mirrors many aspects of the glider, and will hopefully help to alleviate the sometimes tedious travel in older maps. While some professions do currently have access to abilities that improve movement speed, taking those abilities means excluding potentially more useful combat oriented options. The game does also provide fast travel through a waypoint system, but those waypoints are not always close to the player's destination.

The faster movement of the mounts should come in handy -- especially because the new areas introduced by Path of Fire are larger than older zones and have fewer fast travel points. The special movement abilities offered by mounts also allow ArenaNet to create new and varied platforming challenges for players along the lines of the popular jumping puzzles already present in Guild Wars 2.

Mounts will not be usable in combat, but they do provide an Engage Skill to the player. These skills are powerful abilities designed to help a mounted player enter combat effectively. The preview provided access to the Raptor mount, which will be the first mount players can unlock in the expansion.

Navigating the mount takes some getting used to, but the long-range jump provided by the Raptor will be useful in exploring the rocky environments of the Crystal Desert. The Raptor provides a tail spin engage skill that leaps to a target and deals damage in an area. While the tail spin skill tended to one-shot minor enemies in the preview map, it was difficult to gauge the overall utility of the skill in the limited preview window. It certainly felt like it fit the stated purpose of a fast and efficient entry into combat.

The environments and characters available in the preview weekend look and feel different from those in the original game, and very different from the wild jungles of Heart of Thorns. This is a refreshing change that also serves as an homage to the first Guild Wars, which heavily featured the new Crystal Desert and Elona regions in the Nightfall expansion.

If Path of Fire follows the same pattern as the original game, many of the armor appearances shown on NPCs in the preview will be available to players as well. Guild Wars 2 already provides a system for armor customization, so the additional options will help players create new looks inspired by the story of the new expansion. 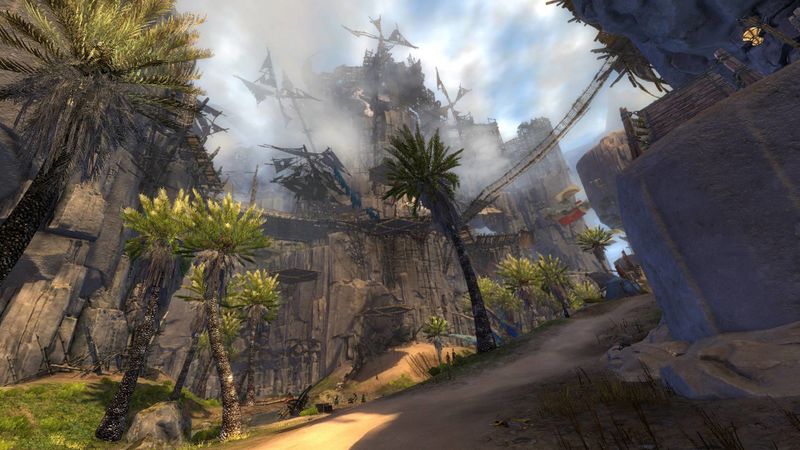 If Guild Wars 2: Path of Fire can deliver on the experience promised by the preview, it will represent a great jumping on point for new players -- as well as an enjoyable experience for existing players.

Players that pre-order Path of Fire will receive an item that immediately boosts a single character to max level, transporting them to the Silverwastes region of the game and equipping them with a character build and items selected by ArenaNet specifically for players new to the game or a particular profession. While these builds are typically not the most effective, they do offer new players a lot of survivability while still providing enough damage to complete events in the open world and progress the story missions. A new player that uses this item will also be able to complete all the story missions from the original game without the level gating that is typically required.

Guild Wars 2 is free-to-play for PC and Mac. As was the case with the original Guild Wars, the paid expansions are stand-alone. Heart of Thorns is not required to play Path of Fire, although players should be aware that some character abilities do require the Heart of Thorns expansion. The expansions for Guild Wars 2 can be purchased individually or as a bundle in game or from the Guild Wars 2 online store.

For more on Path of Fire, check out the new elite specializations.